When Grandma chose a traditional mince pie recipe, it had to call for a mince pie filling that met her standard — it had to be fruity and totally delicious.

And homemade mince pies and tarts are an absolute necessity if you plan to celebrate a traditional Christmas with all the trimmings. You will love these wonderful Christmas pies.

Traditional Mince Pie Recipes for Christmas and the Holidays 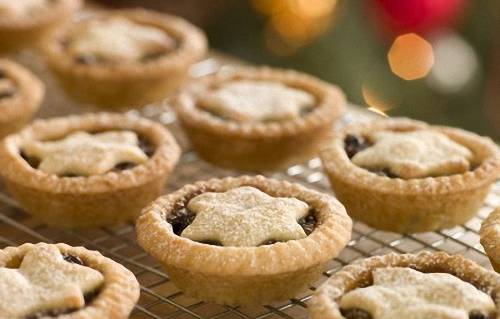 Today's "mincemeat" pie fillings DO NOT CONTAIN MEAT. They are made with apples and raisins and other fruit. Remember, it isn't Christmas without a homemade mince pie and tarts to snack on!

Make some good puff-paste by recipe; roll it out to the thickness of about 1/4 inch, and line some good-sized patty pans with it; fill them with mincemeat, cover with the paste, and cut it off all round close to the edge of the tin.

Put the pies into a brisk oven (425ºF), to draw the paste up, and bake for 25 minutes, or longer, should the pies be very large.

Brush them over with the white of an egg, beaten with the blade of a knife to a stiff froth; sprinkle over pounded sugar, and put them into the oven for a minute or two, to dry the egg; dish the pies on a white doily, and serve hot.

They may be merely sprinkled with pounded sugar instead of being glazed, when that mode is preferred.

To re-warm them, put the pies on the patty pans, and let them remain in the oven for 10 minutes or 1/4 hour, and they will be almost as good as if freshly made. Seasonable at Christmas time. 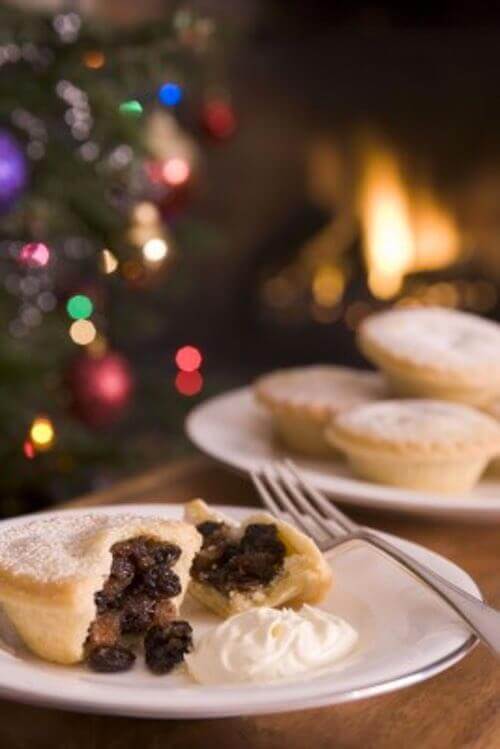 Grate the rinds of the lemons; squeeze out the juice, strain it, and boil the remainder of the lemons until tender enough to pulp or chop very finely.

Then add to this pulp the apples, which should be baked, and their skins and cores removed; put in the remaining ingredients one by one, and, as they are added, mix everything very thoroughly together.

Put the mincemeat into a jar with a closely fitting lid, and in a fortnight it will be ready for use. This should be made the first or second week in December if you plan to use it with a traditional mince pie recipe before the Holidays.

Pare the lemons, squeeze them, and boil the peel until tender enough to mash. Add to the mashed lemon peel the apples, which should be pared, cored, and minced; the chopped suet, currants, sugar, sliced peel, and spice.

Strain the lemon juice to these ingredients, stir the mixture well, and put it in a jar with a closely fitting lid. Stir occasionally, and in a week or 10 days the mincemeat will be ready for use.

Sufficient for 18 large or 24 small pies. Make this about the beginning of December. 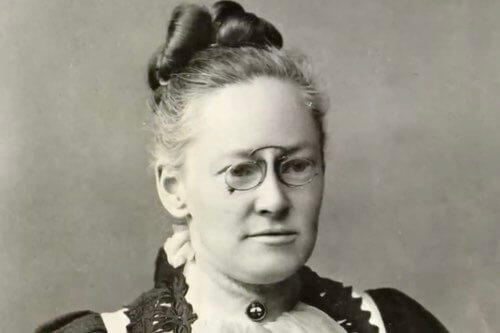 Fannie Farmer was maybe the most famous American cookbook author of her day, and these traditional mince pie recipes are among her best for celebrating Christmas.

How to Bake Mincemeat Pies

Traditional mince pie recipes should be always baked with two crusts. For Thanksgiving and Christmas, puff paste is often used for rims and upper crusts, but is never satisfactory when used for under crusts.

Cook raisins, suet, apples, citron, currants, and sugar slowly for one and one-half hours; then add almonds, spices, and brandy.

Add enough stock in which meat was cooked to moisten; heat gradually to boiling-point, and simmer one hour; then add one cup chopped meat and two tablespoons Barberry Jelly. Cook fifteen minutes.

Add vanilla to milk, then add alternately with flour mixture to creamed mixture. Combine mincemeat and walnuts in separate bowl.

Spread 2/3 of creamed mixture in a greased 8-inch springform pan.

Combine melted butter, brown sugar, and cinnamon. Sprinkle over cake and bake at 350°F for about 45 minutes, or until cake tests firm. 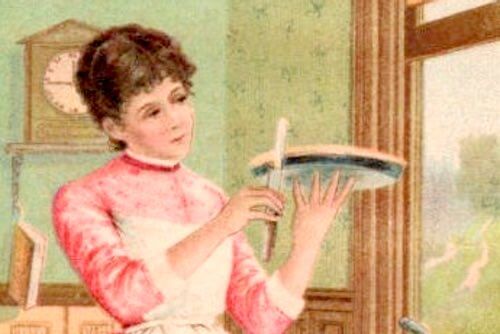 A Christmas dinner without mincemeat wouldn't seem normal at our house. I'm talking about mincemeat that's made with fruit and spices, NOT the old-style minced beef variety.

I will never forget the surprise I got while visiting an elderly English neighbor. Mrs. Price proudly offered me a slice of her homemade mincemeat pie still warm from the oven, and my first bite revealed that she had made it the Old English way with coarsely minced beef and fruit.

Yes, it was good, but its chewy meaty texture was not my preference for a dessert pie.

The traditional mince pie recipes on this page all call for fruit and spices only, except for the following version by Fannie Farmer given for those wanting to try a traditional, old-style minced-meat version.

Though meat is NOT a common ingredient in today's mincemeat, it is very traditional, and the minced-meat filling is actually quite tasty when served as a side dish with the meal. See what you think.

Mix ingredients in the order given, except brandy, and let simmer one and one-half hours; then add brandy and shavings from the rind of the lemons and oranges.

These "minced-meat" pies were eaten during the meal's main course, not later as dessert. And this brings us to the tale of Little Jack Horner. 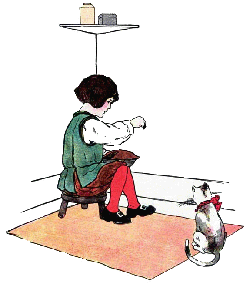 Little Jack Horner sat in the corner
Eating his Christmas pie;
He put in his thumb
And pulled out a plum
And said, "What a good boy am I."

The Real Story of Jack Horner

Legend has it that this old nursery rhyme refers to an unusual Christmas pie that was linked to an event that took place during Henry VIII's Dissolution of the Monasteries in 1539.

Abbot Richard Whiting of Glastonbury Cathedral in Somerset attempted to pacify King Henry by giving him the title deeds to twelve manorial estates as a generous Christmas gift.

Knowing the king's passion for Christmas pie, the wealthy abbot sent his steward, Thomas Horner, to deliver the deeds cleverly enclosed inside a pie crust.

Horner, realizing his employer's days were numbered, carefully opened the crust and took the prize deed from the pie before delivering it.

After the Reformation and after Richard Whiting had been hanged, drawn and quartered, it's alleged that Horner quietly moved his family into Mells Manor in north Somerset where they went on to live quite contentedly.

However, the tale cannot be substantiated, and today the Horner family continues to insist that the story is quite untrue.

Verjuice is a vinegar-like, sour juice often made from crab apples or unripe grapes. It's used in cooking and can still be purchased in some food stores, though its popularity has declined in recent years.

During the reign of Queen Elizabeth I (1558-1603), Christmas pie fillings evolved into a mixture of minced meat, suet, and dried fruits such as raisins, currants, prunes, and dates.

These minced-meat pies were often generously sweetened with sugar and spiced with cinnamon, nutmeg and cloves, symbolic of the gold, frankincense and myrrh that had been given to the Christ Child by the Magi.

Such pies were baked in rectangular pastry cases called coffins to represent the Christ Child's manger. Some bakers even fashioned a tiny baby from the pastry to ornament the upper crust.

To make Good Minced Pies take one pound and half of Veal parboiled, and as much Suet, shred them very fine, then put in 2 pound of Raisins, 2 pound of Currans, 1 pound of Prunes, 6 Dates, some beaten Spice, a few Caraway seeds, a little Salt, Verjuice, Rosewater and Sugar, to fill your Pies, and let them stand one hour in the Oven: When they go to Table strew on fine Sugar.

—A fine example of an early minced-meat pie recipe taken from "The Queen-like Clofet" by Hannah Wolley, published by Richard Lowndes, London, in 1672:

The quantity of minced-meat called for in minced-meat pies decreased over the years to the point where today's traditional mince pie recipe is fruit based and contains absolutely no ground-up meat at all.

Dame, Get Up and Bake Your Pies 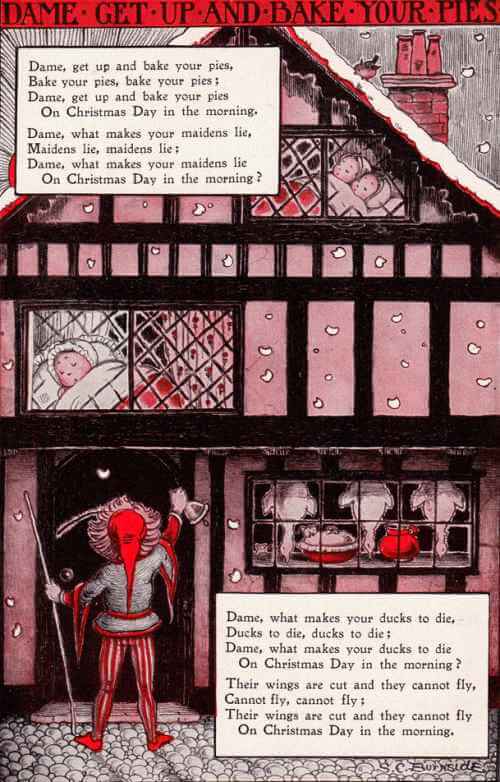