The reminiscences in this Canadian Christmas story are strikingly different from how Christmas is celebrated today. Times were simpler in the early 1800s, and the festivities were much less commercialized, yet so full of meaning and family and joy. Read and see. 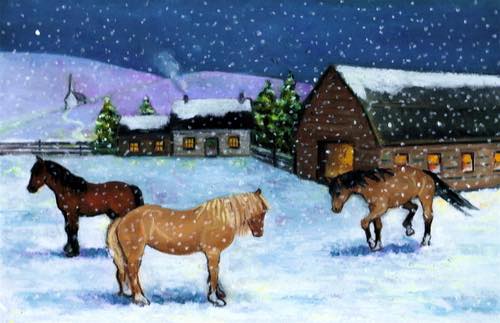 Reminiscences of Christmases Past

Let's step back in time and enter a small Canadian village on Christmas Eve, as the villagers happily prepare for their Christmas Day celebrations, and the Canadian Christmas story begins.

Canadian Village On Christmas Eve In the Early 1800s

Another Christmas, and the sun had just set in one of our small Canadian villages, leaving a trail of beautiful colors behind it on the usual gray-tinted sky of evening, and the one village street was just being lighted with its oil lamps, which burnt most dimly, and were at best few and far between. But though the lights were dim the hearts were light, for it was Christmas Eve.

In the little wooden church, by the dim light of a few lanterns and an odd lamp, a number of young people were sticking here and there, in holes bored in the different seats, small branches of the mountain ash, with their scarlet berries, and two or three of the most venturesome spirits had gone so far as to put a few bits in the corners of the somber old pulpit. But much decoration was deemed unseemly, and not allowed in those primitive times.

In the vestry beyond were assembled the doctor's young son, a stalwart young butcher, and a short, bald-headed old man, who on ordinary days mended the villagers' boots and shoes, but who at this time was bringing forth the most doleful groans from a big bass viol in his efforts to keep time with the above-named young gentlemen, who were practicing their respective parts in the Psalms and hymn tunes on a flute and violin.

These, with a few young girls' voices, comprised the little choir; but tonight the young maidens were too busy to join them, and only peeped in as they passed to and fro bearing their little branches to their destination.

In the little frame cottages the mothers were more or less busy preparing the good things for the week, for these kindly people laid in such a store of cakes and pies as would astonish ordinary mortals nowadays.

There was the great stone oven to be heated for the dozen of pumpkin pies, and how recklessly the golden cream had been stirred in none but the good mother knew, for had she not a fine brindled cow of her own? And the pies must be extra good this Christmastime, when all the children would be coming home.

Then the turkey was well stuffed with savory herbs that she had picked and dried out of her own nice garden, the apple-cream placed in the big glass dish, and the Christmas pudding tied ready for the pot.

I was watching our good housewife as she went back and forth in her spotless kitchen, when suddenly I heard the light flying steps of children, and two young creatures, a boy of about five years of age and a little girl of seven, came in so covered with snow that but for their rosy cheeks and chattering tongues I should have taken them for two snow images.

They had been out with their sled, as they called it; and had tumbled from it so often in their sliding downhill that all their garments had a firm coating of the glistening snow.

As each laid aside comforter, cap, and hood, I saw that the boy had curly brown hair, but the girl's wavy locks were as fair as her face almost, and you could see that she had a sensitive, clinging nature, and I could not help wondering what her future might be.

Well, the children sat themselves down by the great kitchen fire, where a pot hung on a long crook, or crane, full of boiling lard, waiting for the few remaining crullers to be dropped in it.

A great platter of the crisp brown donuts was already on the table, which the children eyed so lovingly that their mother gave them each one, and, telling them to go to bed, said—

"For you know, dears, that Christkindchen never comes to fill the stockings of the good little children till they are all asleep."

Then you should have seen the awe that stole into the little girl's face as she turned her fluffy head, and looking up into the broad chimney, said—

"Christkindchen! Christkindchen! We have been good; please put something nice into our stockings, but be very careful of the fire when you come down, or it will burn you."

And Christkindchen heard her and came carefully down, for in the morning both children's stockings were full. But, you little people nowadays, who have so many toys, picture books, and French sweets, and no end of valuable gifts besides, will laugh when I tell you what trifles gave those little ones of that household long ago so much pleasure.

First, in the toes of the little stockings were a few sticks of homemade candy, twisted tightly in paper, a package of blanched almonds, and raisins, and a dolly made of the doughnuts, with allspice eyes, cloves for ears and nose, and a raisin for the mouth; this was prized the most and carried about all day; and I saw tears shed when one was broken, though comfort was found afterwards in a degree by the eating of it.

Remembrances of an Early Canadian Christmas by an Anglo Canadian in the early 1800s is curated from "The Girl's Own Annual" by Phyllis Browne et al, published by Pinn, London, in 1891.

About the Canadian Christmas Story 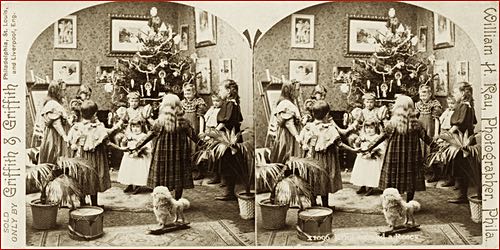 This Canadian Christmas story offers a true account of what it was like celebrating Christmas in Canada back in the early 1800s. Times were simpler yet in many ways happier and more relaxed. It reminds us all to slow down and savor the Holiday Season.

Christmas was centered around its true meaning, the birth of Jesus Christ, and the love of one's family and friends. It was a time of great rejoicing, feasting, and fun. And in the midst of it all were delicious homemade desserts and treats made specially for Christmas Day.

Thankfully, historical recipes for the cakes, pumpkin pies, Christmas pudding, homemade donuts, and sticks of homemade candy mentioned in the story can all be found within the pages of this website.

Use the Christmas dessert recipes to give your children the experience of an old fashioned Christmas celebration. May you and yours have a very Merry Christmas, and peace and prosperity in the New Year!