The festival of Epiphany to celebrate the manifestation of the Christ to the Magi occurs on January 6th, the twelfth day after Christmas Day. Bake your festive cake and start a family tradition. 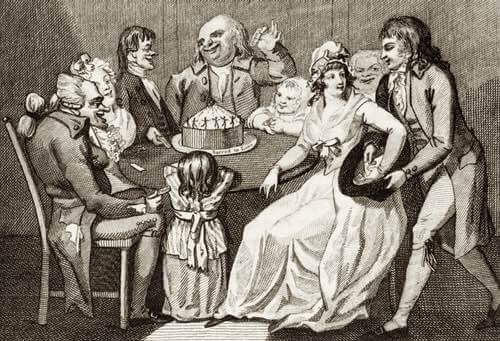 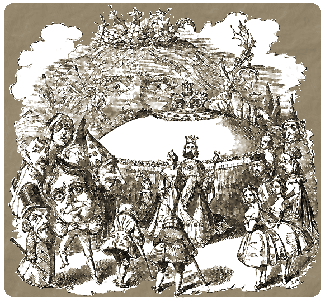 Mix these well, then beat very light eighteen eggs; cut into thin slices half a pound of citron, and the grated rind of two lemons; beat this for at least half an hour until perfectly light; line the pan with buttered white paper, and bake in rather slow heat (325°F) for four hours: when nearly cold, ice it.

Weigh down the flour and sugar on a clean smooth table, make a hole in it, and bank it well up; in this hole put your eggs; cream the butter in an earthenware pan; then add to the flour and sugar the eggs and butter; mix all together and beat up well with both hands.

You may work it up this way as light as a feather; then add the currants, spices, etc.

In olden times, a dried bean and a dried pea were introduced into the cake to determine who should be the king and queen of the evening festivities.

To make this icing, take 2 pounds of finely powdered icing sugar (first having an earthenware pan made warm), put in six fresh whites of eggs, and immediately whisk them, and as quickly as possible, until quite stiff; then add the sugar by degrees, whisking all the time.

As soon as it appears light, cease whisking, and beat it well with the spatter until you have put in all the sugar. A little tartaric acid or lemon juice may be added towards the end of the mixing.

To know when it is sufficiently beaten, take up a little on the spatter and let it drop into the basin again. If it keeps its shape it is ready; if it runs it is either beaten too little or requires more sugar.

This twelfth night cake recipe makes what was also called an Epiphany cake, and it was published by famed commercial bakery chef Eleanor Parkinson.

As its title suggests, this recipe was also used to make formal bridal cakes and fruit-filled pound cakes.

If more sugar is preferred, the quantity must be the same as the butter; but less is used in this instance, that the cake may be light, and also to allow for the fruit, which would make it too sweet. Double the quantity of almonds may be used if required, as some persons prefer more.

Warm a smooth pan, large enough for the mixture; put in the butter, and reduce it to a fine cream, by working it about the pan with your hand. In summer the pan need not be warmed, as it can be reduced to a cream without; but in the winter keep the mixture as warm as possible, without oiling the butter. Add the sugar and mix it well with the butter, until it becomes white and feels light in the hand.

Break in two or three eggs at a time, and work the mixture well, before any more is added. Continue doing this until they are all used and it becomes light; then add the spirit, currants, peel, spice, and almonds, some or most of these being previously cut in thin slices, the peel having also been cut into small thin strips and bits.

When these are incorporated, mix in the flour (enough to make cake batter) lightly; put it in a hoop with paper over the bottom and round the sides, and placed on a baking plate.

Large cakes require three or four pieces of stiff paper round the sides; and if the cake is very large, a pipe or funnel, made either of stiff paper or tin, and well buttered, should be put in the center, and the mixture placed round it; this is to allow the middle of the cake to be well baked, otherwise, the edge would be burnt two or three inches deep before it could be properly done.

Place the tin plates containing the cake on another, the surface of which is covered an inch or two thick with sawdust or fine ashes to protect the bottom.

Bake it in an oven at a moderate heat (350°F). The time required to bake it will depend on the state of the oven and the size of the cake.

When the cake is cold, proceed to ice it. Wedding Cakes have generally, first, a coating on the top of almond icing; when this is dry, the sides and top are covered with royal or white icing.

Fix on any gum paste or other ornaments whilst it is wet; and when dry, ornament it with piping, orange blossoms, ribbon, etc.; the surface and sides are often covered with small knobs of white sugar candy whilst the icing is wet.

Pound, and sift some treble-refined sugar through a fine sieve, and put it into an earthen pan, which must be quite free from grease; to each pound of sifted sugar add the whites of three eggs, or sufficient to make it into a paste of a moderate consistence, then with a wooden spoon or spatula beat it well, using a little lemon juice occasionally, and more white of egg if you find that it will bear it without making it too thin, until you have a nice light icing, which will hang to the sides of the pan and spoon; or, if it is dropped from the spoon, it should remain on the top without speedily losing the form it assumed.

A pan of icing, when well beat and finished, should contain as much again in bulk as it was at the commencement: use sufficient lemon juice to give the icing a slight acid, or it will scale off the cake in large pieces when it is cut.

About the Twelfth Night Cake Recipe 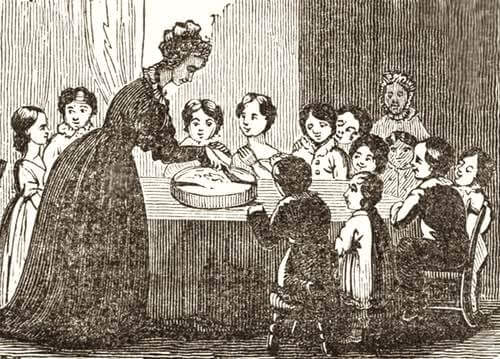 History records that from the Medieval Era to about the mid 1800s, Epiphany, or Twelfth Night, was celebrated in England more than Christmas Day.

The festive day concluded the Twelve Days of Christmas also known as Christmastide, and it was a traditional time for extinguishing the Yule log and the partaking of Wassail.

Aside from the enjoyment of food and drink, lively games, costumes, and acted charades formed an integral part of the festivities.

As a climax to the various activities on January 5th, a twelfth night cake recipe was chosen, and an ornate Twelfth cake was prepared and ceremoniously sliced and served at the evening feast of Twelfth Night.

Traditionally symbolic items to be found in the rich, dense fruitcake might be a dried bean (for the king), a dried pea (for the queen), a clove (for the villain), a rag (for the tart), and a twig (for the fool).

Whoever found the lucky, baked-in bean and pea was declared King and Queen for the entire evening with the power to lead the revelries and to command their betters.

The old fashioned Twelfth night cake recipe was complicated to make by hand, without the convenience of today's modern appliances, and called for expensive ingredients, so those who could afford it often as not purchased Twelfth cakes from a confectioner's shop.

The tradition of Twelfth Night and its elaborate cakes gave way to Victorian Christmas cakes in the 1860s, as the celebration of Christmas Day became more popular in England.

Middle-class families celebrated with a less expensive, somewhat plainer cake that was simply iced, if they could afford it.

Today, Christmas fruitcakes, a penny hidden in the plum pudding, and the pulling of Christmas crackers containing tissue paper crowns, novelties, and jokes are reminders of the Twelfth Night tradition.

Thanks to an original Twelfth Night cake recipe, you can reintroduce this enjoyable, age-old tradition to your holiday gathering.

The Epiphany of the Magi 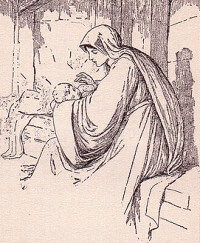 Now when Jesus was born in Bethlehem of Judaea in the days of Herod, the king, behold, there came wise men from the east to Jerusalem, saying, "Where is he that is born King of the Jews? For we have seen his star in the east, and are come to worship him."

And when they were come into the house, they saw the young child with Mary, his mother, and fell down, and worshipped him; and when they had opened their treasures, they presented unto him gifts: gold, frankincense, and myrrh. —Book of Matthew 2: 1-2, 11