The old fashioned pie crust recipes that Grandma loved could always be counted on to make the best pies, and they served her family well for generations.

Make homemade pie shells and pastries the way they should be — light, flaky and rich. Enjoy crust that's so delicious it competes with the filling! 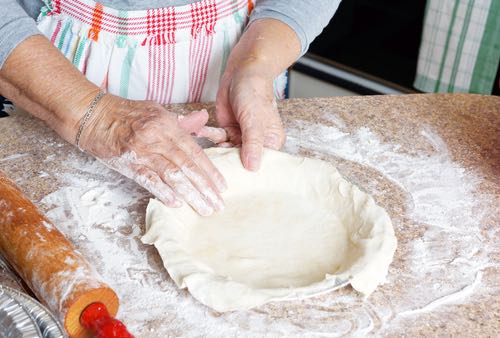 Making pie crusts from scratch does require extra time, but once you taste your homemade pie with its flaky old-style crust, you'll know those few extra minutes were worth the extra effort.

The taste of Mom's homemade pie crusts is one of the fondest food memories of my childhood. Her pastry was so rich and flaky that it fell apart when you lightly touched it with your fork. No store-bought pie shells can compare! 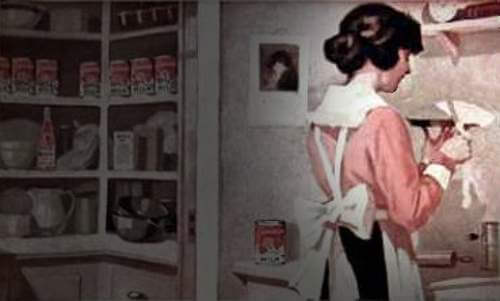 1 cup all-purpose flour, 1/2 teaspoon salt, 1/4 cup plus 2 tablespoons shortening. Sprinkle 2 to 3 tablespoons cold water into flour mixture, one tablespoon at a time, until moist enough to hold together. Press into pie plate and trim the edges.

For a good cream pie crust made without butter or lard, try this never-fail old fashioned pie crust recipe:

To 1 pint of sifted flour add 1 even teaspoon baking powder and sweet cream enough to moisten the flour to a dough just stiff enough to work. Roll out quickly and bake in a quick oven (425°F). This is enough for 2 pieces of single crust.

Pat mixture into 9-inch pie pan. Place pie pan in refrigerator. Allow to stand for several hours and then fill with lemon chiffon pie or any cream pie.

Cut into thin strips about 1 inch wide, sprinkle with butter, sugar, and cinnamon, roll up like jelly roll, and bake a light brown. Yummy. 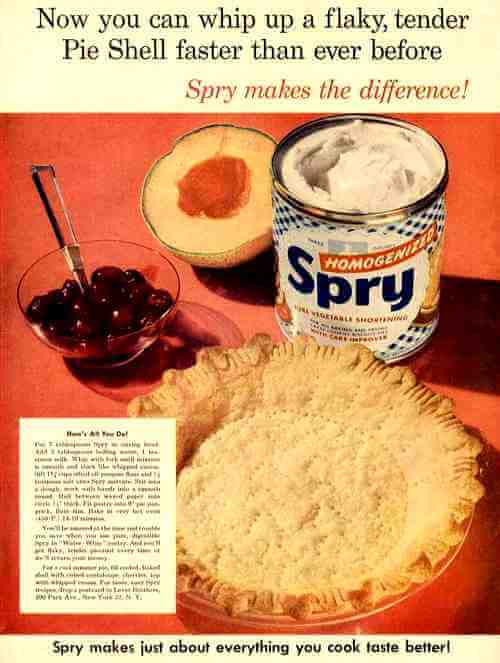 Commercial shortening companies often featured old fashioned pie crust recipes in magazines to encourage the use of their product. Below is a vintage example from Spry Shortening.

Here's All You Do!

Stir into a dough, work with hands until a smooth round. 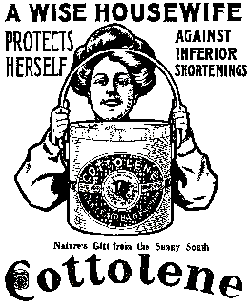 In making a pie, after you have rolled out your top crust, cut it about the right size, spread it over with butter, then shake sifted flour over the butter, enough to cover it well.

Cut a slit in the middle, place it over the top of your pie, and fasten the edges as any pie.

Now, take the pie on your left hand and a dipper of cold water in your right hand; tip the pie slanting a little, pour over the water sufficiently to rinse off the flour.

Two and a half cupfuls of sifted flour, one cupful of shortening (or half butter and half lard cold), a pinch of salt, a heaping teaspoonful of baking powder sifted through the flour. Rub thoroughly the shortening into the flour.

Mix together with half a teacupful of cold water, or enough to form a rather stiff dough; mix as little as possible, just enough to get it into shape to roll out; it must be handled very lightly. This rule is for two pies.

When you have a little pastry left over, do not throw it away; roll it thin, cut in small squares and bake. Just before tea put a spoonful of raspberry jelly on each square.

Refer to the illustration (below) that shows step-by-step how to make puff paste. You will be making quality puff pastry in no time!

To every pound of flour allow the yolk of one egg, the juice of one lemon, half a saltspoonful of salt, cold water, one pound of fresh butter.

Put the flour onto the pasteboard; make a hole in the center, into which put the yolk of the egg, the lemon juice, and salt; mix the whole with cold water (this should be iced in the summer if convenient) into a soft, flexible paste with the right hand, and handle it as little as possible.

Then, roll out the paste; place the butter on this and fold the edges of the paste over, so as to hide it; roll it out again to the thickness of a quarter of an inch; fold over one third, over which again pass the rolling pin; then fold over the other third, thus forming a square.

Now place it with the ends, top and bottom before you, shaking a little flour both under and over, and repeat the rolls and turns twice again as before.

Flour a baking sheet, put the paste on this and let it remain on ice or in some cool place for half an hour; then roll twice more, turning it as before; place it again upon the ice for a quarter of an hour, give it two more rolls, making seven in all, and it is ready for use when required. 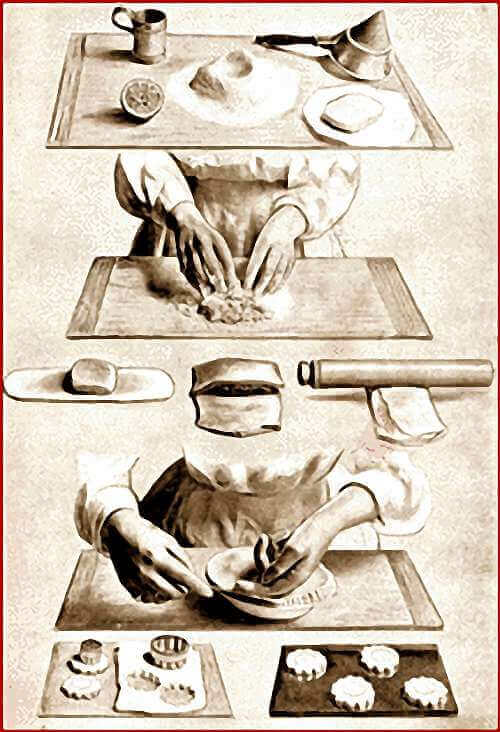 How to Make Puff Pastry Step-by-Step

(2) Sieve the flour, add water, and mix with the fingers.

(3) Roll out and place the butter (shaped into a square about the size of a slice of bread) in the center.

(4) Fold the ends over, making an envelope for the butter.

(6) Method of flaking edge of pies.

(7) Method of cutting out tartlets or bouches.

(8) Tartlets or bouches for baking.

Pie Crust for Under Crusts

A good old fashioned pie crust recipe for a pie requiring only an under crust such as a custard or pumpkin pie is:

Three large tablespoons of flour sifted, rubbing into it a large tablespoonful of cold butter (or part butter and part lard), and a pinch of salt, mixing with cold water enough to form a smooth, stiff paste, and rolled quite thin.

8 ounces of flour, 6 ounces of butter (or equal quantities of butter and lard), 1/2 teaspoonful of lemon juice, pinch of salt, about 1/4 pint of water.

Sieve the flour onto a pasteboard, divide the butter into pieces about the size of a small walnut, and mix them lightly with the flour.

Make a well in the center, put in the lemon juice, salt, and 1 tablespoonful of water, mix lightly, keeping the pieces of butter intact, and add water gradually until a moderately stiff paste is formed.

Roll into a long strip, fold it equally in 3, turn it round so as to have the folded edges to the right and left, and roll out as before.

Repeat until the paste has been rolled out 4 times, then use; or, if convenient, let it remain for 1 hour in a cool place before being used.

Sieve the flour into a basin, make a well in the center, put in the sugar, butter, and eggs, and mix the whole into a stiff paste. Roll out and use as required.

Did you know that pies in the Middle Ages were baked in crusts called coffins? They were thicker than today's crusts and were often discarded after baking.

By the end of the Elizabethan Era, thinner, lighter, more edible crusts made of butter short paste were being used and puff paste was being perfected. Today's pie crusts are similar to the earlier short pastes.

The old fashioned pie crust recipes featured on this page continue the fine tradition of homemade pie making. There's always a matchless satisfaction that comes from making the pastry shells yourself.