You will find a collection of vintage 3D photos enhancing various pages throughout this vintage-themed website. Some old fashioned images are in the double-picture Stereograph format which you can view without the need for special glasses. 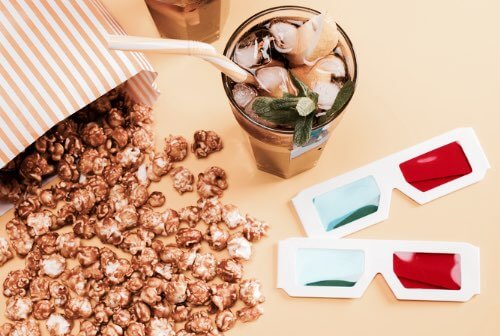 Experience the 1950s with 3D Photographs and Drawings
(Source: ©KateKlimenko/Depositphotos.com)

The more modern images are in the Anaglyph format, and you'll need 3D glasses to view them. All the vintage 3D photos are remarkable to look at. Have fun viewing! 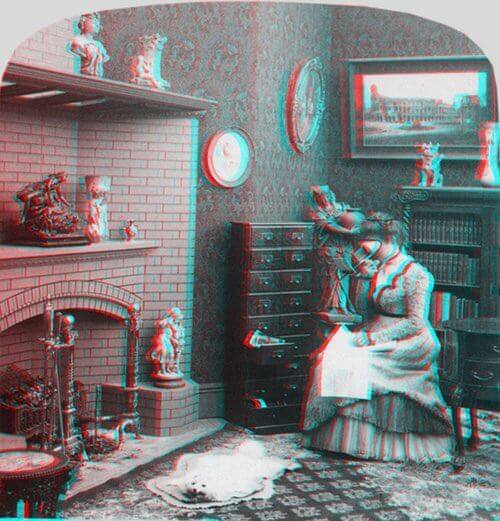 The 1950s saw a 3D craze where movies, photographs, and even comic books were presented in startling 3D depth during the few years the fad lasted. However, people have been fascinated by anaglyph 3D images since the late 1800s.

How Does Anaglyph Work?

Anaglyph drawings utilize a two-color printing process, and a two-color viewer consisting of special glasses with relevant colored lenses. The same picture is printed first with a red ink and then with a greenish-blue ink.

Anaglyph photos and anaglyph movies follow a similar color process. Cameras with two tinted lenses are used, each lens filming from a slightly different position relative to the distance your eyes are apart.

How to View Vintage 3D Photos 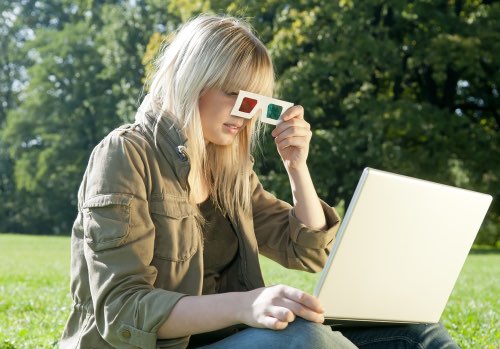 How to View Anaglyph 3D Images on a Computer
(Source: ©luna123/Depositphotos.com)

3D glasses are needed to properly view the Anaglyph 3D photos on your computer screen.

Plastic or card stock glasses with red-blue lenses can be purchased very cheaply from Amazon online, or you can even make DIY 3D glasses as demonstrated in the short YouTube video below.

The following 3D anaglyph images are featured on this site. Red-blue glasses are needed to properly view the vintage 3D photos.

Harbor in Portofino in Liguria, Italy

There were approximately fifty 3D comic book titles published during the 3D craze of the early 1950s. Aside from the familiar characters of Mighty Mouse, the Three Stooges, Superman and Batman, there arose new characters such as Captain 3D and the popular Sheena Queen of the Jungle. 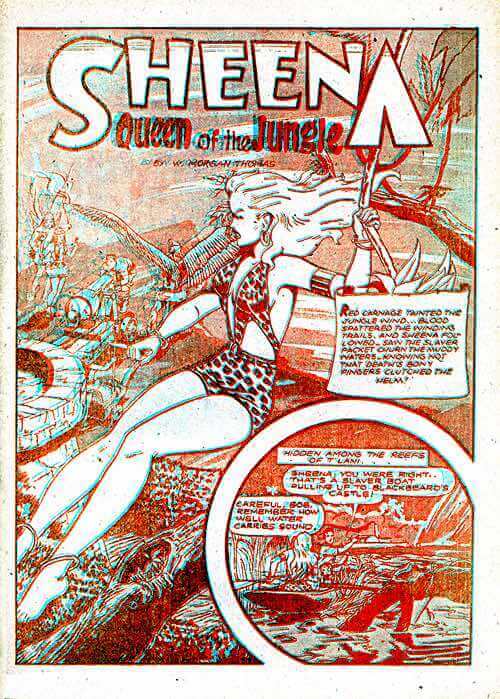 Hand-drawn comics with their distinctive 3D effect first appeared on newsstands in 1953. However, sadly, their spectacular beginning ended just one year later in 1954, as the novelty of 3D comics rapidly diminished for various reasons.

As with the recent demise of 3D television, the inconvenience of wearing 3D glasses had much to do with the demise of 3D comics. The glasses were a card stock insert in the comic and their flimsy nature and colored cellophane lenses could not withstand rough handling. Once the glasses were damaged, the comic book became unreadable.

What's more, unless you took the trouble to attach a string to your red-blue glasses, you had to hold them steady to your eyes while reading, and it soon became all too tiring for most readers.

Higher publishing costs for the 3D drawings resulted in a newsstand price of 25 cents compared to the 10 cents charged for standard 2D comics; it was more than a kid's allowance could bear.

Some publishers developed their own patented techniques to produce the 3D panels with a greater illusion of depth and motion. 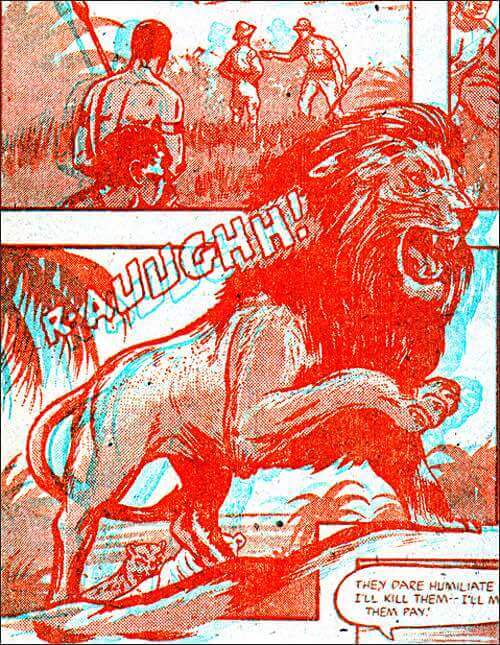 This enlarged sample frame from "3D Sheena Jungle Queen" offers an excellent example of the anaglyph graphics featured in 3D comic books from the 1950s.

Put on your red-blue 3D glasses and note how the lion appears to leap off the page and the scenery recedes into the background. Note how greater depth and motion can be simulated as you move your head from side to side. The 3d comics were truly a visual novelty.

Thankfully, all is not lost. The Digital Comic Museum is one of the best sites to view and to download digitized 3D comics from the early 1950s. 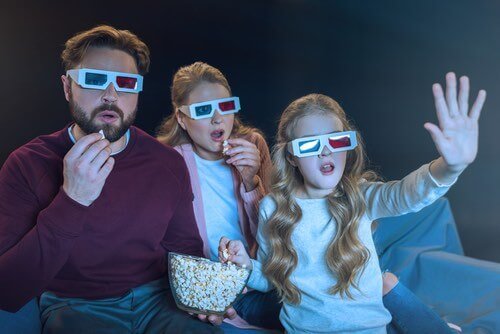 If you would like to see a fine example of an anaglyph 3D movie, here's the YouTube trailer for "Creature from the Black Lagoon," a 1954 black-and-white 3D monster film starring Richard Carlson, Julia Adams, and the famous Gill-man creature.

This classic film has been digitally remastered and released on Blu ray by Universal Pictures in both 3D and 2D versions for comfortable home viewing. 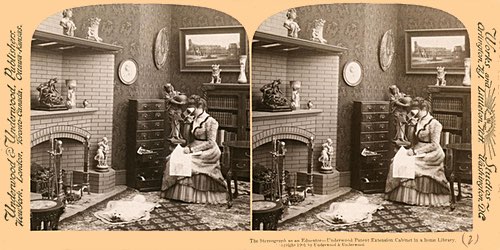 Antique Stereograph of a Woman Looking into a Stereoscope
(Source: Library of Congress Prints and Photographs Division Washington, D.C., LC-DIG-ppmsca-08781)

Brewster's Stereoscopes were demonstrated at the Great Exhibition of 1851, and demand for stereographs exploded soon after. Stereographers traveled the world to photograph well-known attractions to meet public demand for the now-popular "stereo cards."

Stereoscopes became popular in America during the 1860s when stereographs of Civil War battle scenes were in big demand. By the early 1900s and the First World War, stereoscopes were one of the most popular entertainment devices found in homes across North America.

Today's View-Master® and Google Cardboard™ owe their origin to the old fashioned stereograph.

How Does a Stereoscope Work?

When the paired photos are viewed in a stereoscope, your left eye sees only the left image and your right eye sees only the right image. Your brain combines the two images into one giving the illusion of depth or what became known as 3D in the 1950s.

It is possible to view stereoscopic photos without a special viewer simply by leaning in close and staring through the photos while slightly crossing the eyes until the two converge to form one 3D image in the center.

It can take a minute or two for the image to materialize, and some people find this "cross-eyed" method easier to do than others, but it is fun to try.

The following stereoscopic photographs are featured on this site:

Children Play Ring Around the Rosie on Christmas Day, c. 1897

Easter Eggs on Easter Morning in the White House, c. 1904 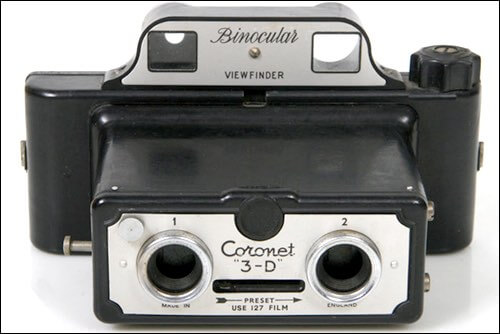 Are you old enough to remember the Coronet 3-D camera? It was a low-cost camera designed to take black and white stereoscopic photographs that could be viewed in 3D simulated depth.

Made by the Coronet Camera Company in Birmingham, England, the novel camera took advantage of the 3D craze back in the mid 1950s. 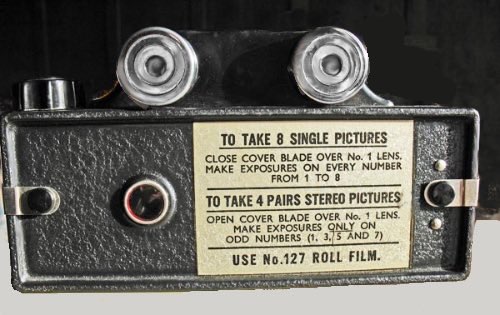 Back of a Coronet 3-D Camera with Operating Instructions
(Source: ©Don Bell)

The Coronet 3-D camera wasn't pretty to look at. It was somewhat clunky in its appearance and quite simple in its design, yet very practical for taking vintage 3D photos with its binocular-type viewfinder.

The camera used standard No. 127 black and white roll film, but instead of the usual eight photos per roll, it took four pairs of stereo pictures. 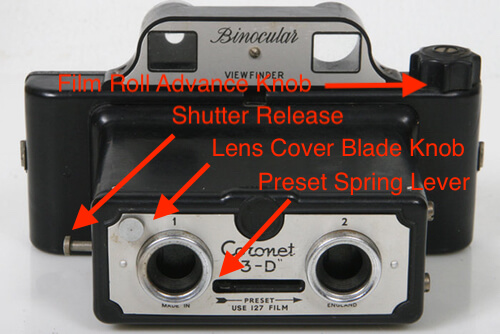 The unique camera could be set to take regular 2D photos simply by turning a small knob next to the right-hand lens which simply moved a metal disk called a cover blade to block light from entering the one lens.

The only other controls included a large knob to advance the film roll, a sliding lever to preset the shutter spring, and a metal shutter release button.

Vintage 3D photos could be taken indoors by purchasing an optional flash unit and a supply of flash bulbs. 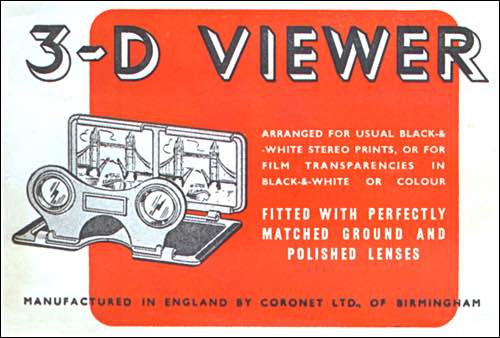 One major drawback was its need for custom film developing. Local photo finishing labs were not equipped for printing the negatives in pairs. The prints needed to be trimmed to proper 1-3/4-inch size to fit the 3D viewer and transposed to get the full 3D stereoscopic effect.

For instance, the pair of pictures must be meticulously cut down the center and the right-hand picture put into the left-hand side of the viewer and vice versa. The pictures were printed to maintain this position permanently. 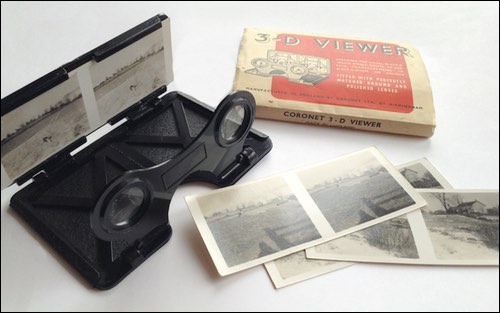 For North American Coronet camera owners, there were only three photo labs equipped to develop and print pictures to specifications, one in New York, one in Hollywood, and one in Toronto, Canada.

I can remember purchasing my Coronet 3-D camera at the Woolworth store in Peterborough, Ontario. They were on sale for $2.95 at the time which would amount to around $28 CDN in today's money, allowing inflation.

That camera was a major purchase for a 9-year-old farm boy without an allowance back in 1955, but I was intent on having it and worked throughout summer to pay for it.

Unfortunately, the realities of costly film processing resulted in me taking only a handful of vintage 3D photos, three of which I've since digitized and now display below.

How to Create 3D Photos 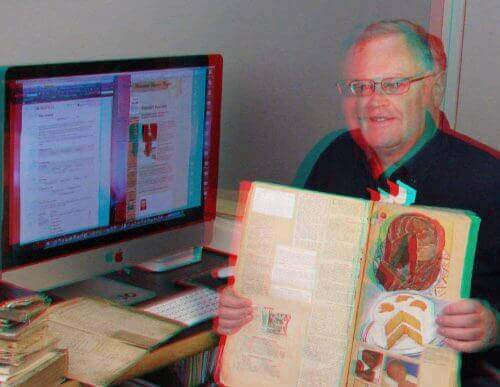 If you would like to try creating your own 3D photos, IMGonline offers a FREE online tool that will easily convert almost any digital photo from 2D to 3D.

Convert your photo to either a red-blue anaglyph image or create a two-picture stereoscopic image. Take your choice. Enjoy!

Your image results will vary depending on the quality of the photo you upload, but you will find your 3D image conversion interesting if not downright impressive. 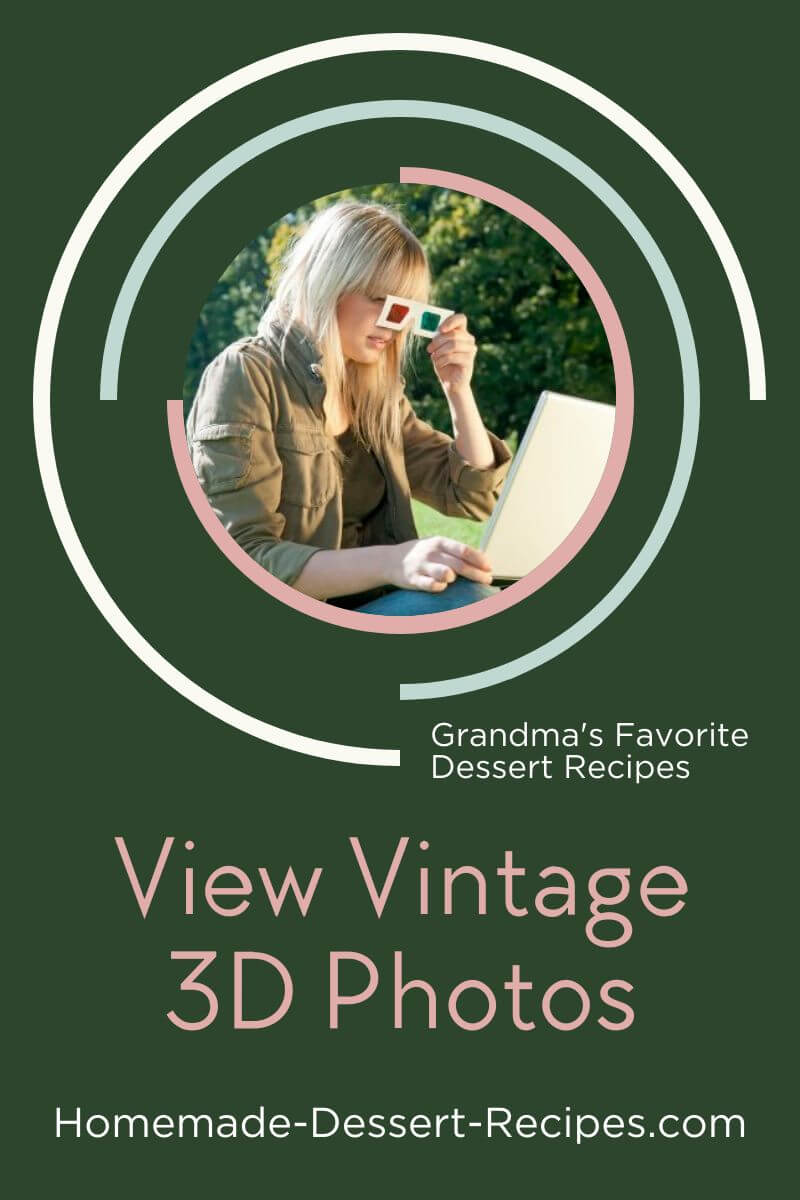