Choose one of these old fashioned apple desserts and serve a tasty dessert dish that everyone will rave about. There's something about the flavor and aroma of baked apple that satisfies and reminds of home and comfort.

Whether it's an apple crisp, a vintage pandowdy, or the plump apple dumplings, you'll love them all. Enjoy a delicious homemade dessert today! 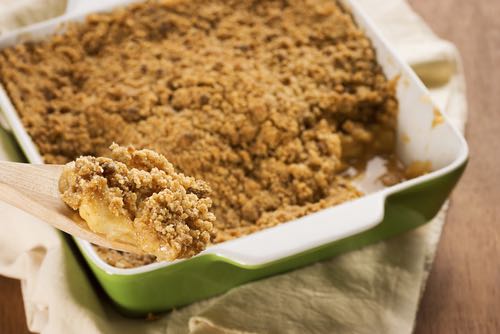 This recipe for apple crisp can be used with any type of apple, but I like it best with either tart Granny Smiths or Jonathons.

Slice the apples into a buttered loaf pan; peeling is optional. Add cinnamon and water. Combine the flour and sugar, then cut the butter in until the texture is similar to that of dry rolled oats.

Spread the mixture over the apples, and bake uncovered at 325°F for 40-45 minutes.

Thank you for this apple crisp recipe! My family is a big fan of crisps and cobblers, so I'll definitely try this one. —Anon.

Submitted by a Reader 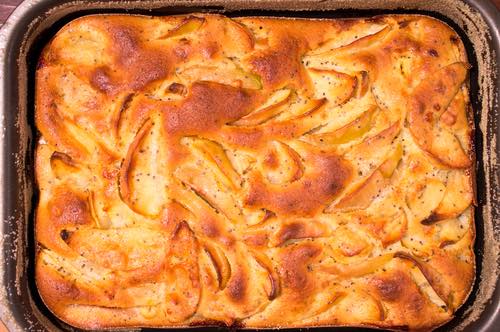 Blend brown sugar, flour, cinnamon, and salt in a saucepan, then stir in water, and cook on medium heat until sauce mixture thickens slightly, then stir in butter, vanilla, and lemon juice. Set aside.

Prepare the drop batter by blending flour, sugar, baking powder, and salt, then cut in the shortening until all is finely mixed, add egg and milk, and stir with a fork to make a drop batter, but do not over mix. Set aside.

Note: To "cut in the shortening," simply take a fork and mash the slightly chilled shortening into the dry ingredients until it forms little crumbs of dough.

It's the little lumps of shortening remaining within the flour mixture that gives a flaky texture to the baked biscuit topping.

Drop spoonfuls of batter over the apple/sauce mixture. Do not stir. Bake in oven at 375°F for about 35 minutes or so.

Delicious! This old fashioned apple pandowdy recipe is THE BEST. Go ahead and try it, you will definitely like it. —Kenya 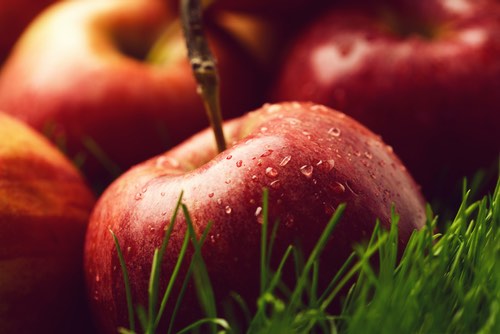 Enjoy the Flavor of Ripe Apples in a Homemade Dessert
(Source: ©stetski/Depositphotos.com)

Slice apples into a buttered pie plate or shallow baking dish. Mix together as you would for pie crust, 1 cup flour and 1/3 cup butter, and work in 1/4 cup brown sugar. Sprinkle the apples with granulated sugar and nutmeg to taste.

Spread the flour mixture over the top and bake at 375°F until the apples are cooked and the top well browned. Serve warm with cream.

For this old fashioned apple dessert, first make a biscuit dough by sifting flour, baking powder, and salt together several times, then rub in the butter and cut in the milk.

Toss dough on a floured board. Roll in thin sheet, cut in six rounds large enough to cover an apple.

Core and pare 6 apples. Place each apple centered on a round of dough. Mix together 6 tablespoons of sugar and 1/2 teaspoon cinnamon and pour 1 tablespoon of this mixture into the cavity in each apple.

Draw up the dough to cover the apple, moisten edges and press together and steam bake (350°F) till apples are tender.

Serve warm with sugar and cream, or with a custard sauce. If the apples are sliced instead of being left whole, they will cook more quickly.

Wash and core apples, but do not pare. Slice one-half inch thick, dip in batter and fry in deep fat, approximately 385°F. Drain on soft paper and sprinkle with granulated sugar.

For this old fashioned apple dessert recipe, melt butter, then stir sugar, flour, salt, and walnuts into butter, then pour over sliced apples in baking dish. Bake one hour in moderate (375°F) oven, or until top is browned. 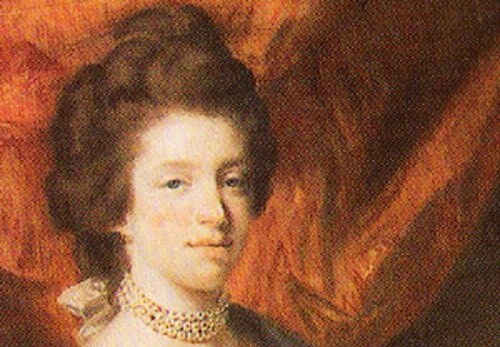 This famous British dessert is said to have been named after Queen Charlotte (1744-1818), the wife of King George III.

(2) Melt in a saucepan 1/4 pound butter, add the apples and 1/4 pound sugar, and a little pulverized cinnamon, cook on a bright fire till the apples are soft.

(3) Slice enough bread to line the cake mold and fry the slices in butter.

(4) Line a cake mold with the slices of bread, pour in the apples, bake for 1/4 hour in an oven, knock out and serve with an apricot sauce or, a custard sauce. Proportions for five persons.

(1) Place in a saucepan 12 apricots cut in pieces with 1/2 pound sugar, and cook till soft. 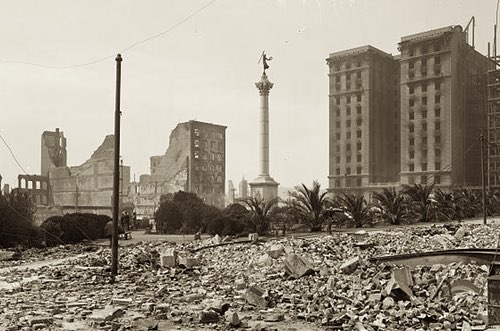 The Hotel St. Francis opened its doors in 1904, and it quickly earned a reputation as being one of San Francisco's finest hotels.

Chef Victor Hirtzler brought his legendary skills to the St. Francis Hotel. He had formerly cooked for European royalty and his famous dishes drew crowds to the hotel's fine-dining restaurant.

Now, you can enjoy the celebrated chef's most popular old fashioned apple desserts.

Take four large apples and remove the insides with a sharp spoon, leaving only a firm shell. Put a spoonful of Applesauce St. Francis on the bottom of the apples.

Whip the whites of six eggs very hard, and mix with a half pint of sweet applesauce. Fill apples with this, dust over with powdered sugar, and bake in a moderate oven (350°F).

To make this old fashioned apple dessert recipe from scratch, peel and core six apples and cut in small pieces.

Put apple pieces into a vessel, add a pony (ounce) of white wine, two ounces of water, one ounce of sweet butter, two ounces of sugar, and a small stick of cinnamon.

Cover, boil for thirty minutes, and strain through a fine sieve.