Practice using the old time weather wisdom and folklore on this page to strengthen your powers of weather observation. Try to out-forecast your local TV weather reporter. You're likely to come pretty close!

The Household Cyclopedia of General Information (1881) 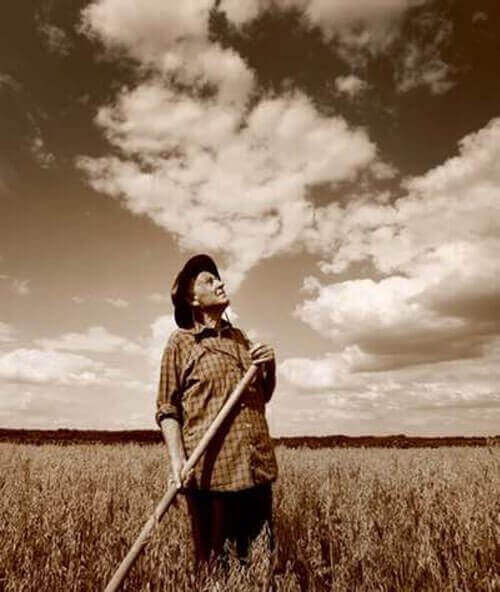 A collection of traditional weather folklore sayings and signs that are useful to the seaman, farmer, and gardener.

Also, a bright yellow sky at sunset presages wind; a pale yellow, wet; and thus by the prevalence of red, yellow, or gray tints the coming weather may be foretold very nearly; indeed, if aided by instruments, almost exactly.

Generally, the softer clouds look, the less wind (but perhaps more rain) may be expected; and the harder, more "greasy," rolled, tufted, or ragged, the stronger the coming wind will prove.

High, upper clouds crossing the sun, moon, or stars, in a direction different from that of the lower clouds, or the wind then felt below, foretell a change of wind.

After clear, fine weather, the first signs in the sky of a coming change are usually light streaks, curls, wisps, or mottled patches of white distant clouds, which increase and are followed by an overcasting of murky vapor that grows into cloudiness. This appearance, more or less oily, or watery, as wind or rain will prevail, is an infallible sign.

Usually, the higher and more distant such clouds seem to be, the more gradual but general the coming change of weather will prove.

Misty clouds forming or hanging on heights, show wind, if they remain, increase, or descend. If they rise or disperse, the weather will improve or become fine.

By Observing Bird and Animal Behaviors

When sea birds fly out early, and far to seaward, moderate wind and fair weather may be expected; when they hang about the land, or over it sometimes flying inland, expect a strong wind with stormy weather.

As many creatures besides birds are affected by the approach of rain or wind, such behaviors should not be slighted by an observer who wishes to foresee weather.

There are other signs of a coming change in the weather, known less generally than may be desirable, and therefore, worth notice, such as when birds of long flight, rooks, swallows, or others, hang about home, and fly up and down or low, rain or wind may be expected.

Also, when animals seek sheltered places, instead of spreading over their usual range; when pigs carry straw to their styes; when smoke from chimneys does not ascend readily (or straight upwards during calm), an unfavorable change is probable.

By Observing Dew and Fog

Dew is an indication of fine weather; so is fog. Neither of these two formations occurs under an overcast sky, or when there is much wind. One sees fog occasionally rolled away, as it were, by wind, but seldom or never formed while it is blowing.

Remarkable clearness of atmosphere near the horizon; distant objects, such as hills, usually visible, or raised (by refraction), and what is called "a good hearing day," may be mentioned among the signs of wet, if not wind, to be expected.

Another general rule of weather folklore sayings requires attention, which is, that the wind usually appears to veer, shift, or go round with the sun (right-handed, or from left to right), and that when it does not do so, or backs, more wind or bad weather may be expected, instead of improvement.

More than usual twinkling of the stars, indistinctness or apparent multiplication of the moon's horns, halos, "wind-dogs," and the rainbow, are more or less significant of increasing wind, it not approaching rain, with or without wind.

Near land, in sheltered harbors, in valleys, or over low ground, there is usually a marked diminution of wind during part of the night, and a dispersion of clouds.

At such times, an eye on an overlooking height may see an extended body of vapor below (rendered visible by the cooling of night), which seems to check the wind.

About the Weather Folklore Sayings

Have you heard the old sayings, "Bees will not swarm before a storm" or "When the sun sets bright and clear, an easterly wind you need not fear"? It's true!

And here's an experiment in weather forecasting that's fun to try:

Did you know that for most species of crickets, the higher the temperature, the more times they chirp? Just count how often the cricket chirps in 14 seconds and then add 40 to get the approximate temperature in degrees Fahrenheit. Simply amazing!

You can learn to predict tomorrow's weather thanks to the forecasting methods commonly used by farmers and fishermen in the days before commercial weather reporting.

The early settlers could forecast short range weather, often with amazing accuracy, simply by comparing and combining the indications they obtained from rudimentary weather instruments with observed weather signs.

Enjoy experimenting with the old fashioned weather folklore sayings and signs. They do work to a surprising degree, and your accuracy in interpreting them will improve with practice.

1. Tie a rope around a rock and hang it perpendicular from the branch of a tree so that it rests about two feet from the ground.

If the rock hangs still, there's no wind; if it sways to and fro, there's a moderate wind blowing; if it hangs level with the branch, there's a hurricane; if it's wet, it's raining; if it has snow on it, it's snowing; if it's missing, somebody stole it. 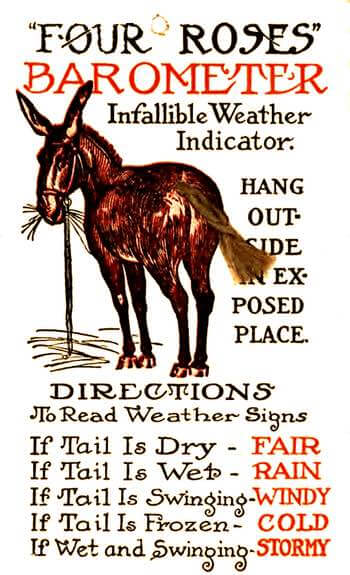 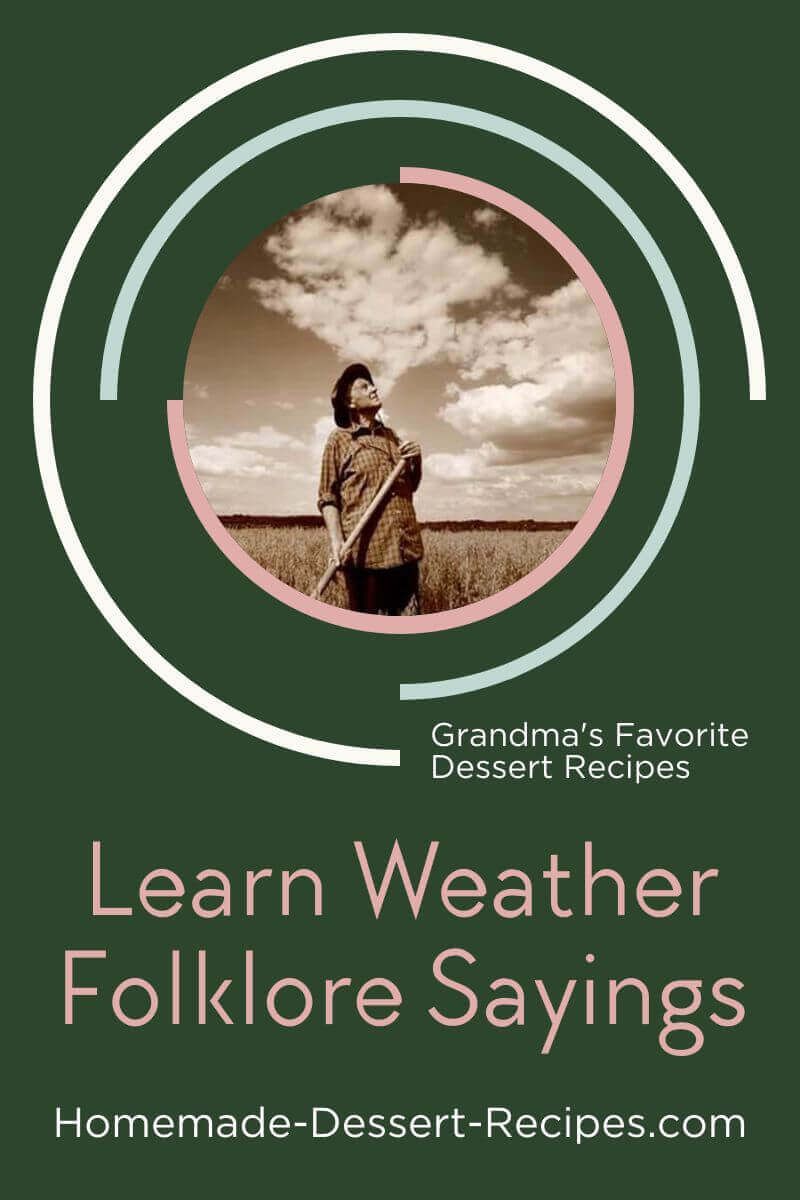