How to Fold Table Napkins

Have fun learning how to fold table napkins. The step-by-step instructions and detailed illustrations will help you to transform cloth napkins into classic folded napkin designs from the Victorian Era that will add class and excellence to any table.

By learning a variety of popular napkin folds, you'll always have a source of inexpensive table decorations for any occasion. There's plenty of illustrations, so allow time for the page to load.

How to Fold Table Napkins 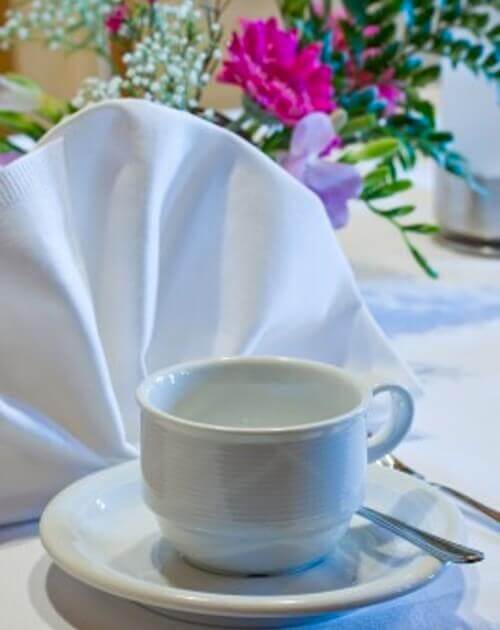 The linen serviettes or table napkins should be neatly and tastefully folded when first put on the table. In ordinary family use they are often folded smoothly and slipped through napkin rings made of silver, ivory, or bone. 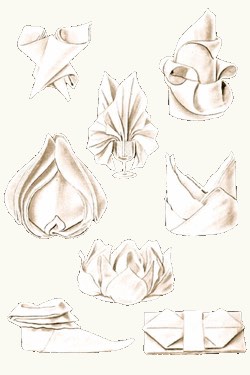 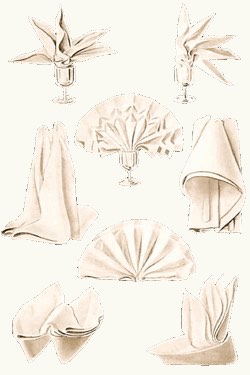 In the following, we give instructions and illustrations showing a few ways of making these useful articles an ornament to the table, but when these fancy designs are not fashionable in the household, the serviette should simply be folded neatly and laid flat on the plate.

The accompanying engravings depict popular methods of folding linen napkins. It must, however, be remembered that it is useless to attempt anything but the most simple forms unless the napkins have been slightly starched and smoothly ironed. In every case the serviette folding must be exact, or the result will be slovenly and unsightly.

The usual size of these indispensable accompaniments to the dinner table is a square measuring about 20 to 30 inches. The designs in the following illustrations are worked out with a square serviette, and there is a diagram showing how each serviette fold is made and the effect that is produced in every case.

A small dinner roll or piece of bread cut thick, about 3 inches square, should be placed in each folded napkin, when such designs as "The Mitre," are used, and the appearance of the dinner table may be greatly improved by putting a flower or small bouquet in napkins folded into other patterns.

How to Fold Table Napkins: The Classic Fan 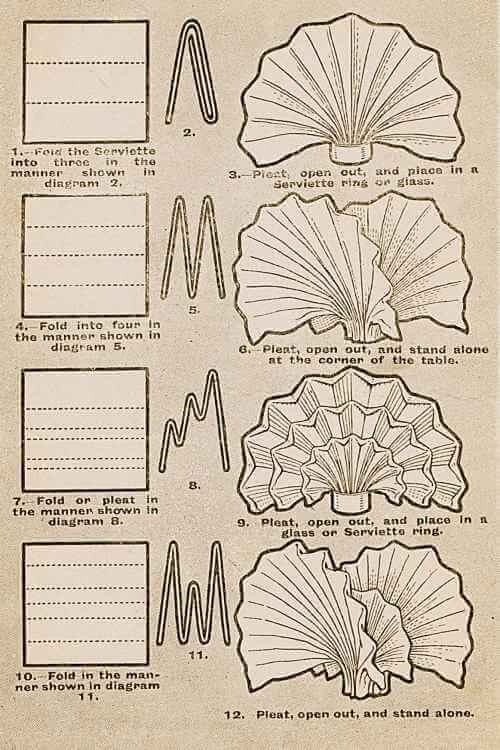 1. Fold the serviette into three in the manner shown in diagram 2.
2. (Diagram 2.)
3. Pleat, open out, and place in a serviette ring or glass. 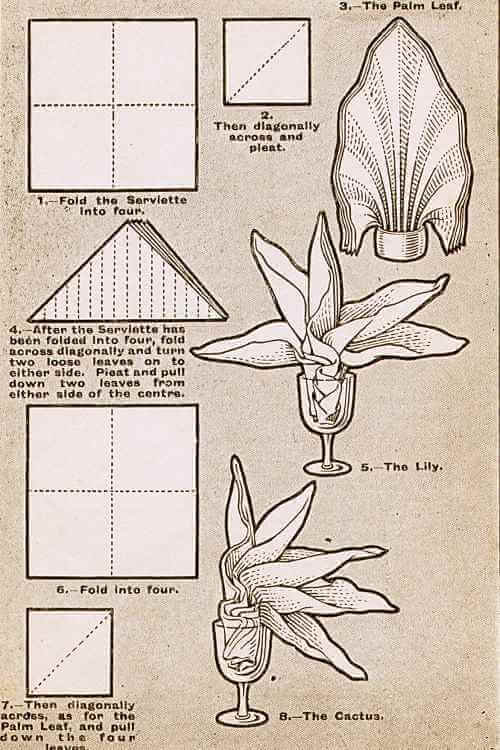 1. Fold the serviette into four.
2. Then diagonally across and pleat.
3. The Palm Leaf.

4. After the serviette has been folded into four, fold across diagonally and turn two loose leaves on to either side. Pleat and pull down two leaves from either side of the center.
5. The Lily.

6. Fold into four.
7. Then diagonally across, as for the Palm Leaf, and pull down the four leaves.
8. The Cactus.

How to Fold Table Napkins: The Mitre 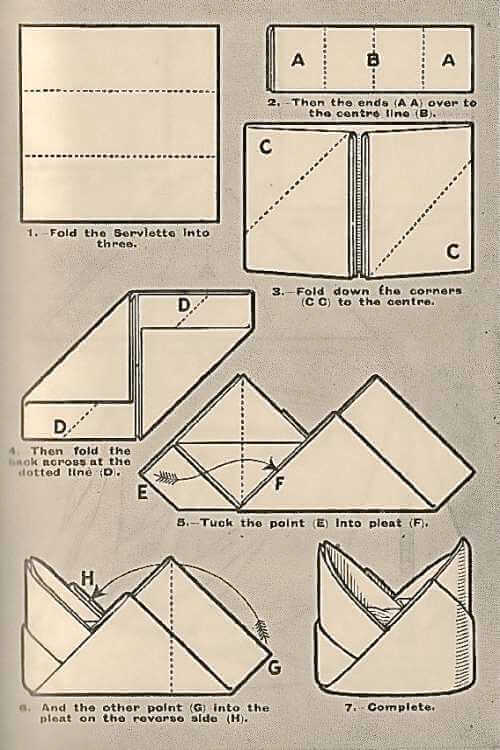 The Mitre, or Bishops Hat

The Bishops Hat napkin fold design is perfect for supporting either a dinner roll or flower blossom in its center.

How to Fold Table Napkins; The Bishop 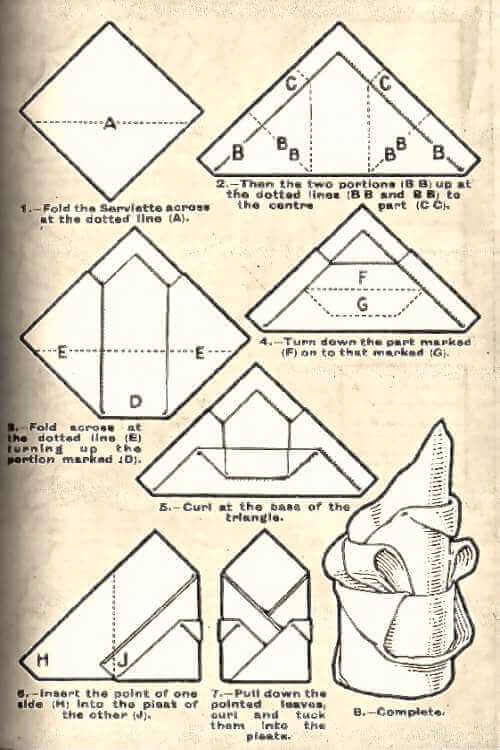 How to Fold Table Napkins: The Rose 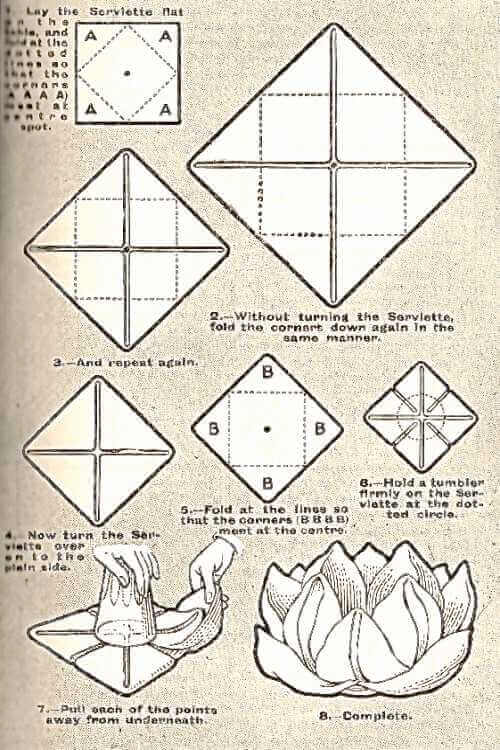 The rose napkin fold design when left flat at step 6, is perfect as a base for a wine or water glass. The completed rose design can support a dinner roll or flower blossom in its center.

How to Fold Table Napkins: The Sachet 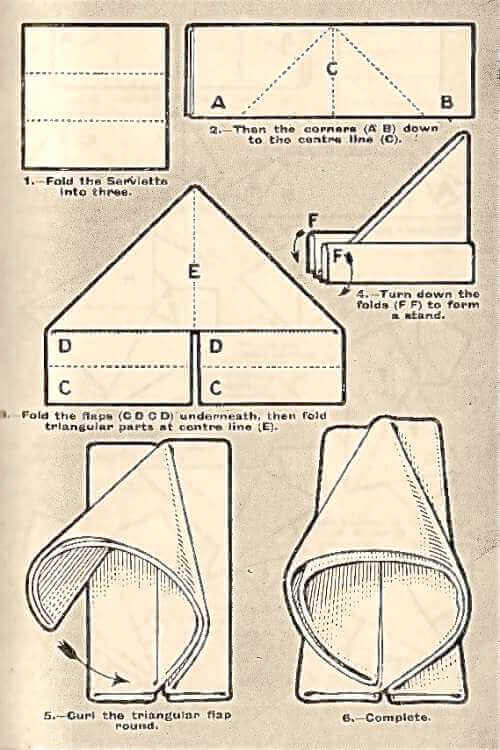 The Sachet, or Pocket

The open sachet or pocket design is perfect for holding a small dinner roll in its curled, open end.

How to Fold Table Napkins: The Flat Sachet 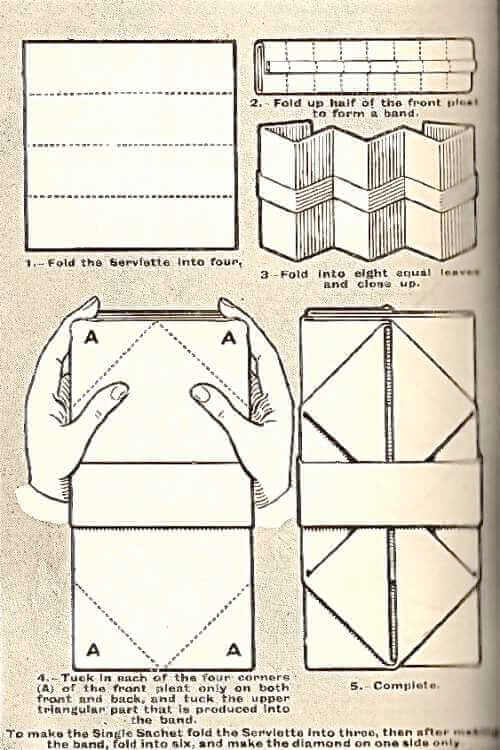 The Flat Sachet, or Pocket

The pocket napkin design is perfect for placing either silver cutlery or a rose beneath the folded band.

1. Fold the serviette into four.
2. Fold up half of the front pleat to form a band.
3. Fold into eight equal leaves and close up.
4. Tuck in each of the four corners (A) of the front pleat only on both front and back, and tuck the upper triangular part that is produced into the band.
5. Complete.

To make the Single Sachet, fold the serviette into three, then after making the band, fold into six, and make the diamond on one side only.

How to Fold Table Napkins: The Pyramid 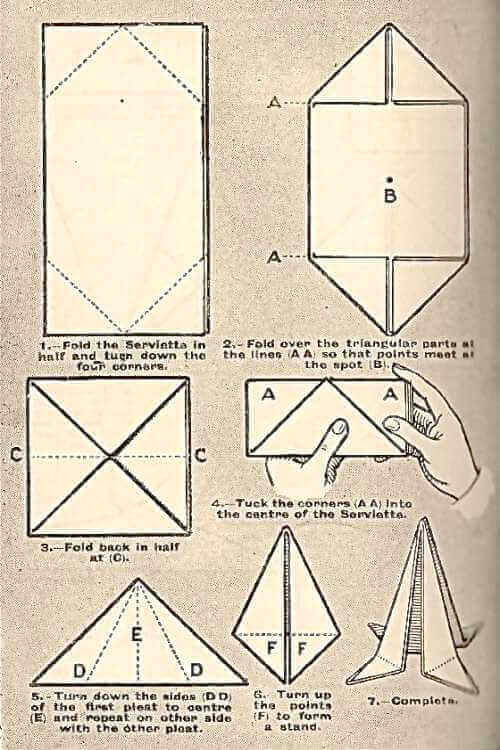 1. Fold the Serviette in half and turn down the four corners.
2. Fold over the triangle parts at the lines (A,A) so that points meet at the spot (B).
3. Fold back in half at (C).
4. Tuck the corners (A,A) into the center of the Serviette.
5. Turn down the sides (D,D) of the first pleat to center (E) and repeat on other side with the other pleat.
6. Turn up the points (F,F) to form a stand.
7. Complete.

How to Fold Table Napkins: The Fleur de Lis 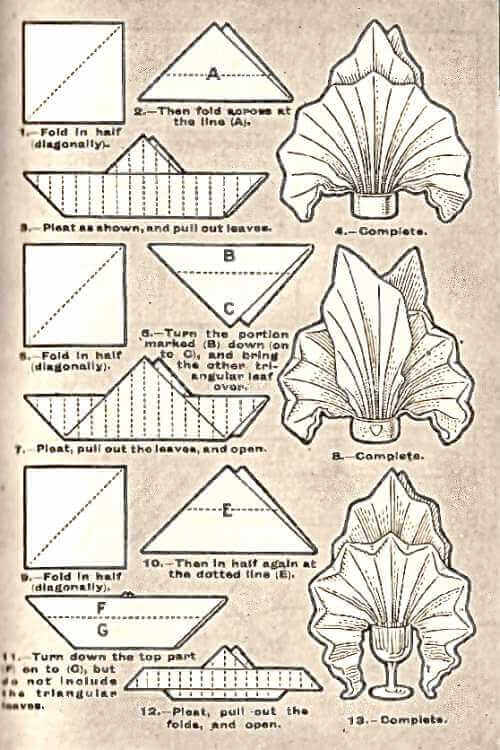 Varieties of the Fleur de Lis

5. Fold in half diagonally.
6. Turn the portion marked (B) down on to (C), and bring the other triangular leaf over.
7. Pleat, pull out the leaves, and open.
8. Complete.

How to Fold Table Napkins: The Vase 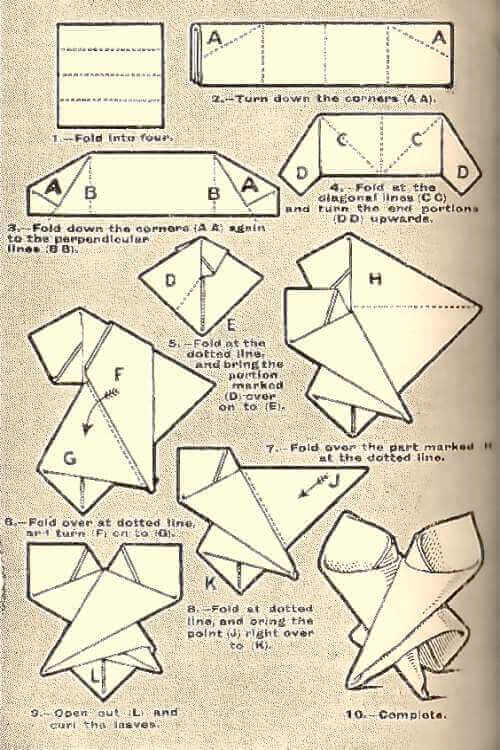 How to Fold Table Napkins; The Boats 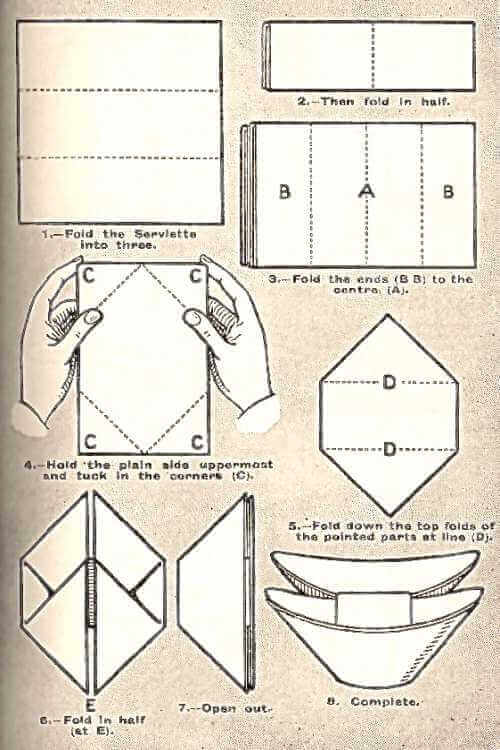 How to Fold Table Napkins: The Cockscomb 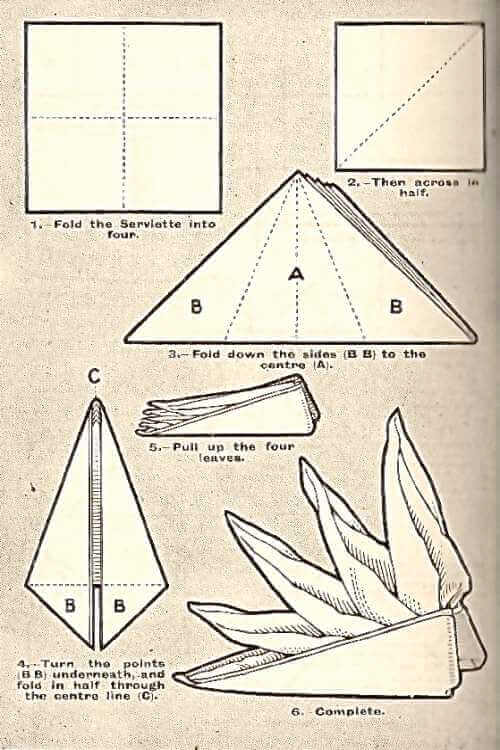 How to Fold Table Napkins: The Slipper 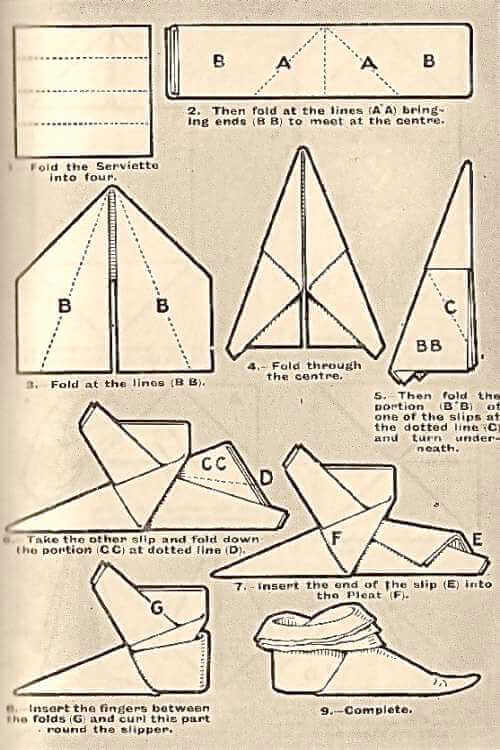 1. Fold the Serviette into four.
2. Then fold at the lines (A,A) bringing ends (B,B) to meet at the center.
3. Fold at the lines (B,B).
4. Fold through the center.
5. Then fold the portion (BB) of one of the slips at the dotted line (C) and turn underneath.
6. Take the other slip and fold down the portion (CC) at dotted line (D).
7. Insert the end of the slip (E) into the pleat (F).
8. Insert the fingers between the folds (G) and curl this part round the slipper.
9. Complete.

Note: The slipper requires much practice to perfect.

How to Fold Table Napkins: The Boar's Head 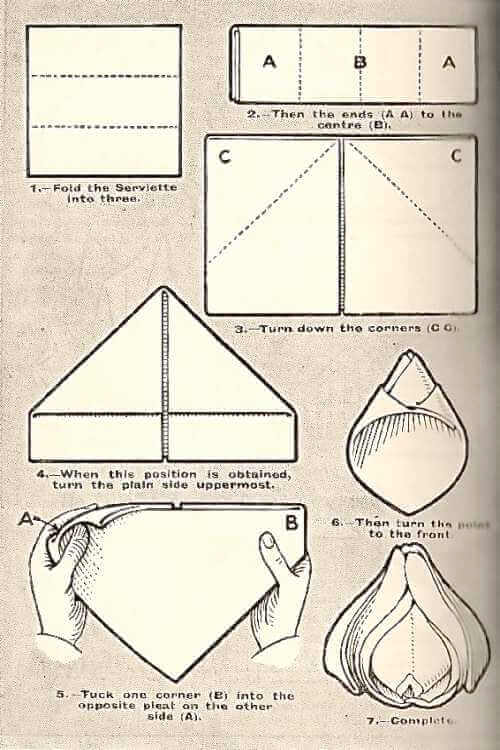 Learning how to fold table napkins, formally called the art of napery, is an easy-to-learn art form. A properly folded linen napkin in one of the attractive shapes makes a classy yet inexpensive table decoration that's sure to impress.

Once folded, the dinner napkins can be placed in traditional napkin rings or within a crystal glass, while some designs are best left standing on their own to impress your most discriminating dinner guest.

All this creative hobby requires is some practice and a one-time purchase of the quality linen serviettes to bring years of pleasure. The simpler designs could also be adapted for folding quality paper napkins. 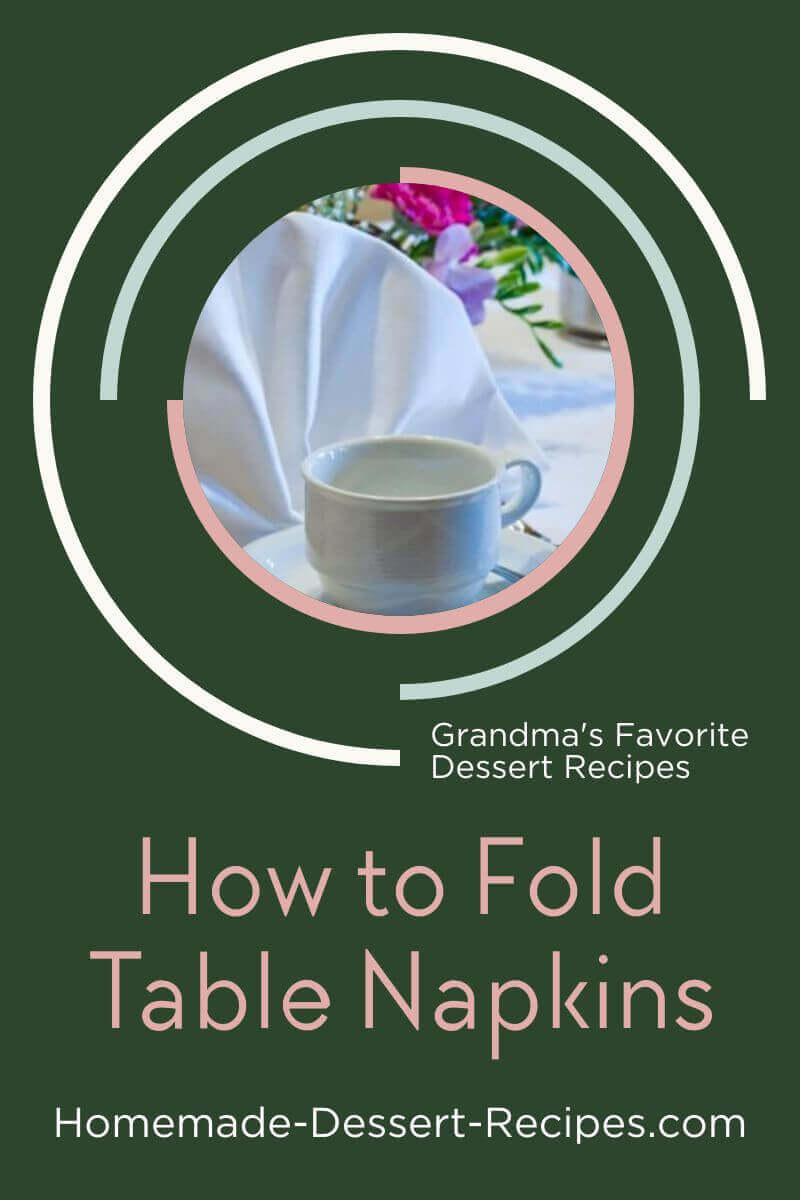