Royal cake recipes became common in Canada's kitchens throughout the 1800s, 1900s, and some are popular to present day.

Members of our current Royal Family and their ancestors have been honored by having commemorative dessert cakes named after them.

Don't be misled, though, these are fine, rich-tasting cakes that are suitable for any occasion and perfect for serving on holiday events and at parties. They are guaranteed to create interest and conversation. 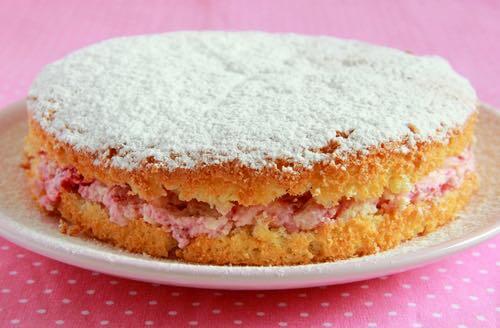 This old fashioned royal cake recipe from the Victorian Era makes tiny cakes that are perfect for serving at parties, or an afternoon tea.

The old fashioned sponge cake recipe can also be used to make a single Victoria sponge, if preferred.

A Victoria sandwich cake is simple to make, but it is finicky concerning its cooking time and oven temperature, so keep a close eye on it while it's baking. Do NOT over bake.

Also, since its unique lightness comes from the air trapped within the batter, don't skimp on the time spent in beating.

Ingredients: 6 ounces of flour, 4 ounces of granulated sugar, 2 ounces of butter, 3 eggs, 1 teaspoonful of baking powder, a little milk, jam of your choice, pinch of salt.

Stir the sugar and yolks of eggs together until thick and creamy, then add the butter melted. Pass the flour, baking powder, and a good pinch of salt through a sieve, stir it lightly into the rest of the ingredients, and add milk by degrees until the mixture drops readily from the spoon.

Now, whisk the whites of eggs stiffly, stir them in as lightly as possible, and pour the preparation into a well-buttered pudding tin.

Bake in a moderately hot oven (350°F) for about 20 minutes, let it cool, split in halves, spread thickly with jam, replace the parts, and press lightly together.

Cut into finger-shaped pieces, arrange them in groups of three, letting the layers cross each other, sprinkle liberally with granulated sugar, and serve.

Mix the flour, cornflour, and baking powder together, beat the butter and sugar to a cream, beat in the egg, flavoring, and milk, then the flour, &c., and continue to beat for five minutes.

Butter some small bun or muffn tins, half fill them with the mixture, put into a moderate oven (350°F) and bake for about twenty minutes; stand on a sieve till cold. 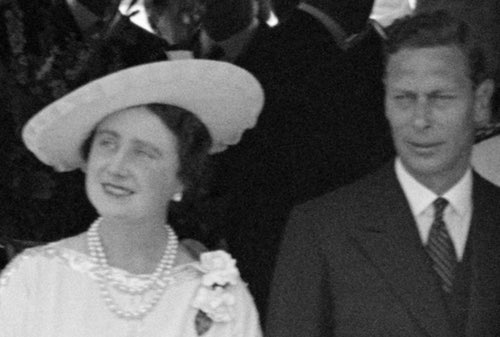 The decadent taste of this moist dessert cake with its dates, nuts, and caramel topping might remind you of Britain's beloved sticky toffee pudding.

However, this cake was also associated with Queen Elizabeth the Queen Mother's first royal visit to Canada in 1939.

The Elizabeth Cake was said to have been made by the Queen Mother herself on occasion, but there is no proof to the rumor.

And although the origin of this famous royal cake recipe remains a mystery, its delicious taste is well known.

Pour boiling water over chopped dates in a bowl, stir in the baking soda, and set aside until the following ingredients are prepared.

In a large bowl, mix sugar, butter, eggs, and vanilla together until smooth and light. Fold in sifted flour, baking powder, and salt. Add chopped nuts and the date mixture. Stir until batter is smooth.

Scrape batter into a greased 9x13-inch cake pan and bake at 350°F for 35 to 40 minutes, or until the cake tests done when a skewer inserted in the center comes out clean.

Gently boil brown sugar, butter, and cream together in a saucepan for about 3 minutes. Spread evenly over cake, then sprinkle with coconut. Let cool. Cut in squares for serving. 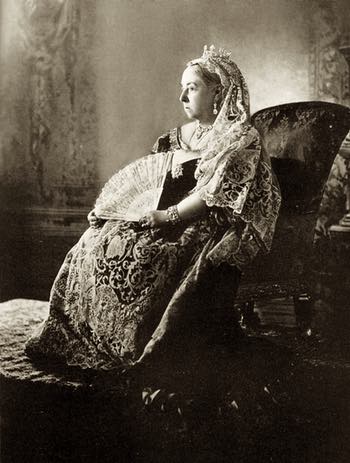 The formal portrait was taken to commemorate Her Majesty Queen Victoria's Diamond Jubilee in 1897.

One pound flour, one of sugar, half pound butter, four eggs, one nutmeg, lemon if desired, gill of wine, one of brandy, one of sweet cream, one pound raisins, two teaspoons baking powder in the flour.

Rub the butter, sugar, and yolks of eggs to a perfect cream, beating a long time; add sweet cream, then flour, and fruit the last thing; bake an hour and a half (350°F).

The following YouTube video is a copy of an early movie filmed at Balmoral Castle, Scotland, in 1896.

The film features HM Queen Victoria with her relatives, including Tsar Nicholas II of Russia, Tsarina Alexandra, and the Duke and Duchess of Connaught. The Queen's Highland servant John Brown can be seen leading her pony carriage along the castle's pathway.

One gill equals 1/2 cup of liquid.

Rub together the flour, sugar and butter, add grated lemon rind, and baking powder. Beat the eggs and mix them with the milk.

Mix all together, drop in small pieces onto a buttered pan, and bake in good oven (350°F) about fifteen minutes.

The candied peel should be cut into slices, and one slice placed on each bun before baking. 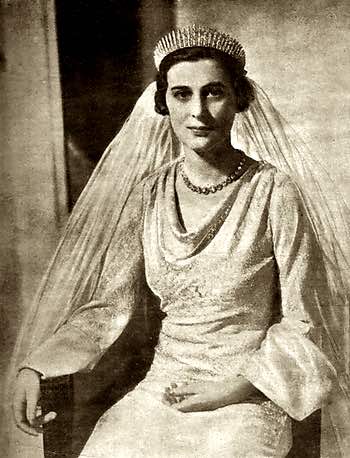 Mom's vintage scrapbook contains newspaper clippings of a royal wedding that took place before the days of television, back when the newspapers and radio broadcasts were the popular media for reporting on world events.

Royal weddings were a huge event in Canada and throughout the British Empire at the time. People wanted something upbeat to focus on that would help lift their spirits during the 1930s, and the height of the Great Depression.

The marriage of the Duke of Kent (youngest son of King George V and Queen Mary) and Princess Marina of Greece and Denmark took place at Westminster Abbey on November 9, 1934.

Afterwards, a formal wedding breakfast was held in the State Apartments at Buckingham Palace where guests could at last view the magnificently ornate wedding cake in all its towering glory as pictured below.

The wedding breakfast was attended by 150 guests. After the breakfast, the newly married Duke and Duchess of Kent together made the first cut in the nine-foot-high wedding cake using the Duke's sword. —Family Herald, December 12, 1934

However, similar to the way in which Prince William's chocolate groom's cake captured the public's attention in 2011, another unique cake served at the 1934 reception became newsworthy.

A feature of the brilliant wedding reception will be Princess Marina's favorite cake, called Baklava, which is said to bring good luck to the bride and family if given by friends.

The cake will be presented to Princess Marina on the eve of the wedding by Greeks living in London. —Family Herald, November 28, 1934 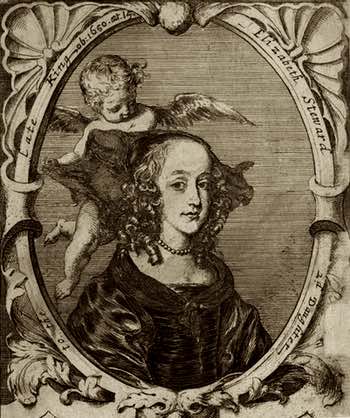 Lady Elizabeth Stuart (1635-1650) was the second daughter of England's King Charles I and Queen Henrietta Maria.

At the age of six, the princess became a prisoner of Parliament on the outbreak of the English Civil War in 1642. Afterwards, she had very limited contact with her father, King Charles I.

Elizabeth tearfully saw her father for the last time on the eve of his execution in 1649. Just twenty months later, at the young age of 14, she died from pneumonia and was found with her head resting on the Bible her father had given her at their last meeting.

The historical royal cake recipe that follows is believed to be from the personal recipe collection of Queen Henrietta Maria of England.

Consult my Glossary of Renaissance Cooking Terms for help with the outdated cooking terms and methods, if needed.

To make a Cake the way of the Royal Princeſs,
the Lady Elizabeth, daughter to King Charles the firſt.

Take half a peck of Flower, half a pint of Roſe-water, a pint of Ale yeaſt, a pint of Cream, boil it, a pound and a half of Butter, ſix Eggs (leave out the whites), four pound of Currans, one half pound of Sugar, one Nutmeg, and a little Salt, work it very well, and let it ſtand half an hour by the fire, and then work it again, and then make it up, and let it ſtand an hour and a half in the Oven; let not your Oven be too hot.

About the Royal Cake Recipes 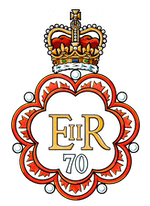 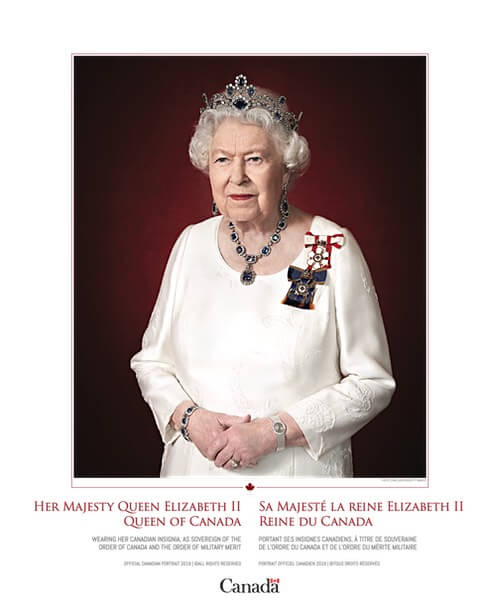 The above reproduction of the Official Canadian Portrait of Her Majesty Queen Elizabeth II taken by Chris Jackson in 2019 is a copy of the PDF version available at the Government of Canada website.

Who can ever forget the 2022 Platinum Jubilee tea hosted by Her Majesty for her beloved guest, Paddington Bear from Darkest Peru?

"Each day is a new beginning, I know that the only way to live my life is to try to do what is right, to take the long view, to give of my best in all that the day brings, and to put my trust in God." —HM Queen Elizabeth II

Popular royals from the present and times past have had their names immortalized in the old fashioned royal cake recipes featured on this page:

The Victoria Sandwich Cakes, Queen Victoria Cake, and Queen Victoria Buns were named to honor Her Majesty Queen Victoria (1819-1901) who reigned 63 years as Queen of the United Kingdom and the British Dominions, and almost 25 years as Empress of India.

The Elizabeth Cake is said to honor Her Majesty Queen Elizabeth (1900-2002), The Queen Consort and wife of King George VI, and styled The Queen Mother after her husband's death in 1952. 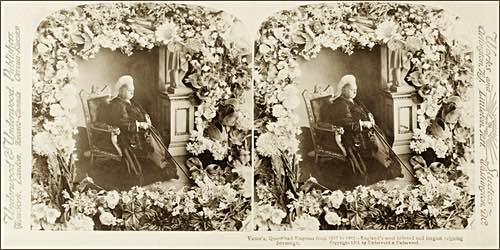