The traditional German bread pudding recipes that follow will make deliciously flavorful Old Word bread puddings that you'll be proud to serve on any occasion. These old fashioned sweet bread puddings are an authentic and mouthwatering comfort food.

Have fun trying these delicious recipes. The German bread pudding recipes are traditional and easy to make calling for basic ingredients and in a practical sense they will offer a great way to use your leftover stale bread.

Heat oven in advance and don't over bake, or your bread will be on the dry side. Test occasionally by inserting a table knife in the center and if it comes out clean, your pudding is done.

Allow pudding to cool slightly and serve warm from the oven, but it's also good when served at room temperature.

For flavor variations sprinkle a layer of raisins, apple slices, or chocolate chips, or for added flavor and richness, pour rum, or a little melted butter over the top before baking. 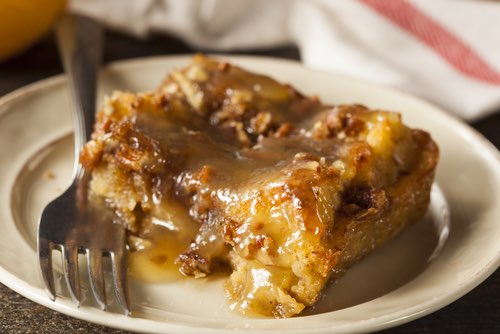 Take 2/3 pound of bread spread with butter, 1 quart of milk, 9-10 eggs, 1/4 pound of currants, 1/4 pound of stoned raisins, both washed and dried, 1/4 pound of crushed almonds, 2 heaping tablespoonfuls of sugar, and the thinly peeled and finely chopped rind of a lemon.

Line a pudding mold (or casserole dish) with slices of the buttered bread. Then stir eggs, milk and sugar together, pour a little of this sauce over the layer of bread, add some more slices of bread and sauce and finish with bread. Then pour over this sauce a cupful at a time, so that it will be evenly distributed over the pudding.

Let the pudding bake (300°F) for 2 to 2-1/2 hours (until top is light brown) and serve with a good cream, claret, or fruit sauce. The sauce of the latter should be thickened a little, and there must be plenty of it. This traditional German bread pudding recipe is for 12 to 16 persons.

Bread Pudding With Currants or Cherries

This homemade pudding is prepared the same as in the preceding Zwieback recipe, taking 8 eggs; instead of raisins take 1/2 pound of currants (or sour cherries) and 2/3 pound (1-1/2 cups) of sugar and prepare the same as given in the above recipe.

The pudding is served without a sauce and is of a fine flavor. This traditional German bread pudding recipe is sufficient for 10 to 12 persons.

This German pudding recipe is a variation of the homemade bread pudding in that it calls for cake layers instead of dried bread slices.

You can slice any cake into 2 or more thin layers, using a knife or a cake leveler, or you can use Grandma's method of taking a long sewing thread (or length of dental floss), wrapping it evenly around the cake, and carefully pulling the ends around the opposite way, thereby slicing through the cake.

Bake 5 thin layers of a good German cake. Then take 6 ounces of flour, 1 large cupful of cream, vanilla, pinch of salt, and 3 ounces of butter and mix to a dough, boil in a medium saucepan and stir until it no longer adheres to the pan, then add slowly 4 whole and the yolks of 4 eggs, and lightly stir through this the beaten whites of 4 eggs.

This pudding is steamed for 1-1/2 hours, then take it out of the mold and serve with an apricot sauce.

Crumb loaf of stale bread to make 2 cupfuls and soak in 1 quart of milk in a large bowl. Beat 4 egg yolks with 1 cup of powdered sugar in a separate bowl; add the bread crumbs, a small cup of raisins and the grated peel of a lemon to the egg mixture. Mix all well.

Meringue Topping: Beat the leftover egg whites with a pinch of salt, some white sugar (about 2 tablespoons), and a little lemon juice, spread meringue on the top. Let get light brown in the oven (300°F). Serve with wine sauce.

How Do You Serve Bread Pudding?

If you love homemade puddings, you will love Grandma's easy bread pudding recipes. Her old fashioned bread and butter pudding is 100% delicious, and it's a traditional recipe that's become a family favorite.