Here's a traditional Berliner Pfannkuchen recipe to make those delicious fried jelly donuts that Germany is so famous for. You may also give into temptation and make the Fried Butter Rings too.

The Berliner is made of a rich, sweet yeast dough without a hole, and it's deep fried. Its filling consists of marmalade, or a favorite jam, and it's served iced, or powdered with confectioners' sugar.

How to Make Berliner Doughnuts 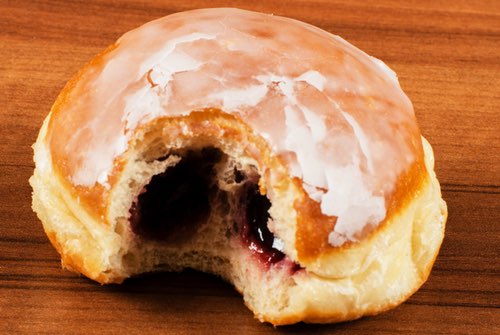 There are two methods of making the Berliner. In the traditional recipe given below, the sheet of yeast dough is rolled out with a rolling pin, and the filling is added before deep frying.

Another method is to form the dough into flattened balls and after deep frying and cooling add the filling by inserting the jam into the side of the doughnut using a piping bag. Doughnuts fried without a filling will have a distinctive white edge.

An electric stand mixer with a dough hook can greatly speed the mixing process should you plan to be making large quantities of German donuts.

Classic recipes in the German tradition call for German doughnuts to be fried in lard or fat, as it lends its distinctively rich flavor; however, you can also fry Berliner donuts in your preferred vegetable oil. Use enough lard or oil at the right temperature (190°C / 375°F) for frying, allowing about 2 minutes or so on each side, or until golden brown.

Berliners can be eaten warm or cold, but fresh is best. They also can be frozen and thawed for serving later.

Leftover scraps of dough can be formed into small "donut holes" for deep frying to make a delicious treat.

For the filling: currants, cherries, jam, jelly, or marmalade.

Flour and soft butter are warmed. Then whip the eggs in a large bowl, stir the lukewarm milk with the eggs, yeast, butter, sugar, salt, and combine flour into a dough that is beaten with a wooden spoon until it bubbles, and no longer sticks to the spoon.

Then cover dough with clean kitchen towel and set it aside in a warm place (such as a warm oven at 90°F) for about 45 to 60 minutes to rise about double in height.

When this is done roll soft dough out on a floured board to about the thickness of one-half to one inch and put a teaspoonful of the fruit jelly or marmalade 2 inches apart on half of the dough and lay the other half over this, and then with a glass rim or circular cutter, cut so as to have the dots of jelly in the center of the cakes, seal the edges, and covering them with a towel, let them raise again for about 30 minutes.

Then heat the fat in the deep fryer (375°F), put the cakes in side-by-side with the tops to the bottom, putting in just enough cakes to cover with the fat.

Occasionally move them about with a fork and when brown from below turn the cakes with a fork, and when the top is brown also, take them out with a slotted spoon, lay them on a cooling rack, on pieces of absorbent paper towels for a while until cool.

Turn in small bowl of powdered sugar until coated or sprinkle with sugar and cinnamon over the top; serve fresh.

If wished they can also be frosted with a sweet sugar icing flavored with rum.

Note: When baking cakes in which yeast is used, for instance Berliners, the upper side is put into the fat first. They must be of a dark yellow golden brown color when done.

Mix 1 cup icing sugar, 2 tablespoons water, and rum flavoring to taste. Water and rum may be replaced with lemon juice if a tart lemon taste is wanted. Dip Berliner into the sugar glaze or brush on generously with a pastry brush.

Warm the milk and the butter in large mixing bowl, stir in eggs, rosewater, almonds, salt, sugar, yeast mixture, and flour. Beat the dough, and lay it on a baking board dusted with flour. Then take small dough balls in palm of your hand, form them into little rings, and set aside to let dough rise.

Bake in hot lard the same as the traditional Berliner Pfannkuchen recipe, beginning with those which were made first. They must be of a light yellow color when done.

While hot roll in powdered sugar and cinnamon spice. Delicious!

About the Traditional Berliner Pfannkuchen Recipe 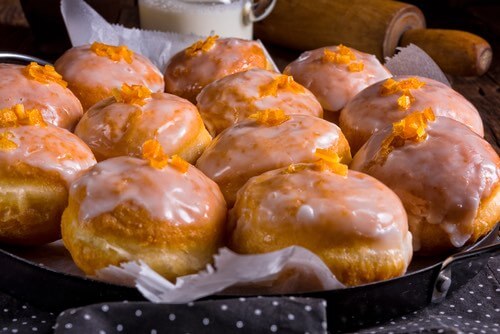 The Berliner pfannkuchen recipe is said to have been invented in 1756 by a Berlin confectioner, once a regimental field baker in the Prussian army. The fried pastries became known as "Berliners" and their added jelly fillings became widely popular in the 1800s.

Berliners are traditionally served on New Year's Eve, aka Saint Sylvester Day, and during Carnival Season which is similar to America's Mardi Gras. However, since Berliner doughnuts are a very popular dessert pastry, they are readily available for sale in German bakeries and enjoyed on special occasions throughout the year.

After receiving their customary jelly, marmalade, apricot jam, or raspberry jam, or a favorite type of jam filling; they are either dusted with confectioners' sugar or topped with a sugar icing glaze that's sometimes flavored with a dash of rum.

Some people enjoy Berliners with a little lemon juice mixed into the dough, and topped with lemon zest. This reminds me of the BeaverTails® pastry that's popular in Canada, as it's delicious when served with a little drizzle of lemon juice.

On festive occasions, as a joke, one Berliner is secretly filled with a hot mustard mixture and served on a tray with the other jelly filled doughnuts to some unsuspecting soul.

Berliners are called different names in different parts of Germany. They are commonly called Berliner Pfannkuchen (Berlin Pancake) in Berlin and Northern Germany, and they are known as Krapfen and Carnival Cakes in Southern Germany and in Austria.

Berliners are called Paczki (pronounced Punch-key) in Poland where they are traditionally served on Fat Tuesday, Ostatki, the day before Ash Wednesday. Traditionally, the making of Paczki emptied the pantry of fat, lard, butter, and sugar on Shrove Tuesday, before fasting on Ash Wednesday.

North Americans liken them to their common jelly doughnuts, but Berliners are much richer tasting with their high-fat content and quality fillings and must be classed in a league of their own.

Perfect Krapfen are NOT your typical jelly donut! That's why everybody raves about them! Ich bin ein Berliner!

Be sure to see the traditional German recipe for Fastnachts, a deep-fried raised cake doughnut that's similar to Berliner Pfannkuchen, but is less sweet and without the jam filling.