These traditional German apple strudel recipes make delicious strudels that you will be proud to serve to your family over the Holiday Season, or on special occasions the year-round. Choose from several below, and as a bonus, I've added a recipe for making an authentic Tiroler strudel with almonds.

The German word strudel means "whirlpool" which best described the thin layer of thin dough rolled around the apple filling when the baked strudel is sliced for serving. Homemade strudel has become one of the world's favorite desserts. 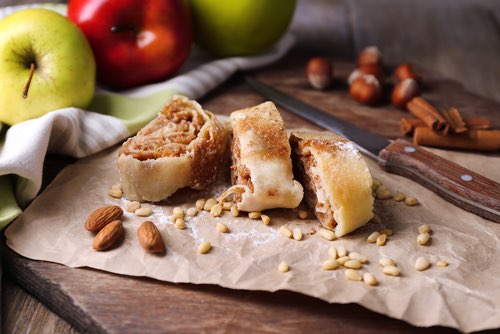 Roll out some puff pastry about one-eighth-inch thick and eight inches wide with a rolling pin. On it spread some sliced Granny Smith apples mixed with sugar and powdered cinnamon as shown below in the step-by-step instructions. 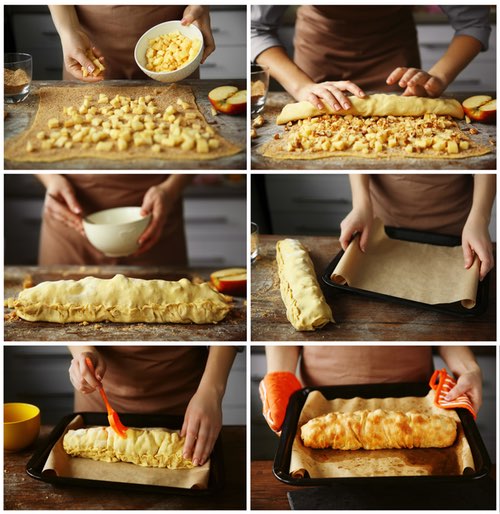 How to Make Apple Strudel Step by Step
(Source: ©belchonock/Depositphotos.com)

Wet the edges and fold up both sides of pastry, forming a roll. Place on a baking sheet, wash the top with egg wash, and bake in a hot oven (425°F).

When done cut in slices about two inches wide, and serve your apfelstrudel hot, with hard and brandy sauces. 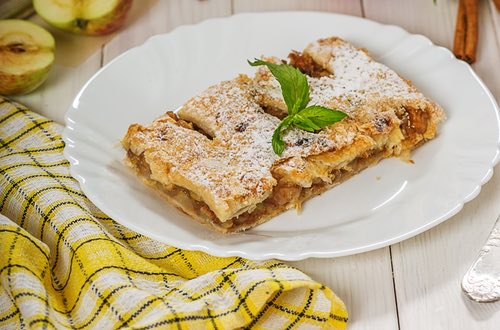 The tradition of laboriously rolling out paper-thin homemade strudel dough on a tabletop was fading even when this recipe was penned in 1915. It was a difficult process that required a large work surface.

Aunt Sarah pared and quartered six medium-sized tart apples, placed in the bottom of an agate pudding dish, poured over them one cup of hot water and 2 tablespoonfuls of sugar. She allowed this to stand on the range and cook while she mixed the following homemade dough.

Into a large bowl, she sifted 1 pint of flour with 2 teaspoons baking powder, one teaspoonful of sugar, a little salt. Cut 1 tablespoonful of melted butter through the flour. Lightly mixed all together into a soft dough with about 3/4 cup sweet milk. Should she have a left-over yolk of egg that was added to the milk.

She rolled dough out lightly on the floured bread board, cut vents in the crust to allow steam to escape and spread it over the top of the dish containing the hot apples; placed in a hot oven (425°F) to bake until light brown on top. Serve with sugar and cream. 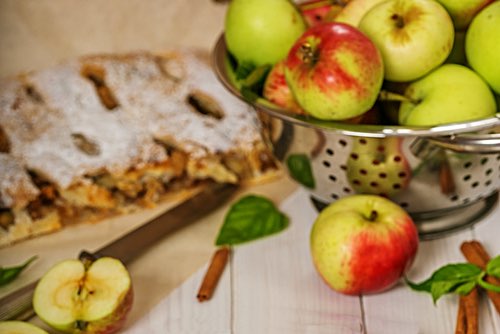 Aunt Sarah called this "Apple Strudel," but the traditional German recipe for Apple Strudel, a.k.a. "a traditional Apfelstrudel recipe," handed down by her Grandmother, was quite different:

An ordinary noodle dough (original strudel dough) was made, placed on a clean cloth on the table and rolled as thin as tissue paper.

Small pieces of butter were scattered over this thin, stretched dough, covered with tart apples, cut in thin slices, sprinkled with cinnamon, brown sugar, and chopped golden raisins, rolled up and baked in the oven until brown on top, basting frequently with a thin syrup composed of sugar, butter, and water.

German Cookery for the English Kitchen (1906) 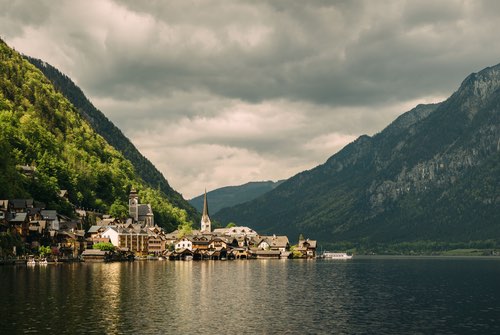 Are you out of fresh apples for a traditional German apple strudel recipe? While this Viennese Tiroler Strudel doesn't call for apples, the homemade almond strudel is absolutely delicious! And you can easily substitute other kinds of nuts too. Discover why it's one of the national dishes of Austria.

Cream 2 ounces of the butter and add 4 yolks to it. Then stir in the flour and the yeast, dissolved in a gill (1/2 cup) of warm water. Mix thoroughly.

Place the dough on a floured surface, a board, well dredged with flour, and roll out to less than 1/4 inch in thickness with a rolling pin, and spread with the following mixture:

4 yolks, beaten with 4 ounces sugar, and then the 4 whites, whisked stiffly, stirred into them with 2 ounces gated almonds.

Roll together and then curl round on itself (in snail-like form) and place to rise in a pan thickly buttered with an ounce of butter. When well risen, bake in a hot oven (425°F).

After the first 10 minutes, pour over the Strudel 1/2 pint of cream and bake for a further 30 minutes until done.

This isn't a traditional German apple strudel recipe, as it's more like an apple pie the way it's made, but this crisp, delicious apple strudel dessert is very easy to make.

Place layers of apple slices into bottom of buttered baking dish. Sprinkle with enough sugar and cinnamon mixed. Dot with lumps of butter.

Sift 1 cup sugar, 1 teaspoonful baking powder, 1 cup flour, and 1/2 teaspoon salt into mixing bowl and into this, break 1 egg. Mix until batter is crumbly, then evenly pour over apple mixture.

Here's an easy German recipe for making a baked apple dessert dish that's most popular around Christmas time, but it's also served and enjoyed throughout the cool winter season as a delicious comfort food.

Baked apples are a traditional dessert served in Germany on Saint Nicholas Day, December 6th. The "Bratapfel" is a symbol of generosity and the bags of coins that Nikolaos of Myra gave to the poor in the 4th century.

As long as you're making one of the traditional German apple strudel recipes, why not set aside an extra apple or two and make yourself a delicious Bratapfel dessert? Delicious anytime! 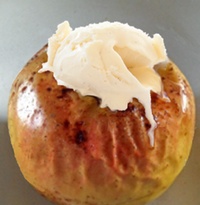 Bratapfel is the perfect dessert to enjoy while warm and cozy in front of the fireplace after a busy day!

First, carefully core 2 firm, tart apples, but don't core all the way through to the bottom. A small spoon will work if you don't have a corer. Leave the bottom 1/4 of the apple intact to prevent the filling from leaking out.

Mix the ingredients together, then stuff apples with this mixture. A little rum can be poured into the buttered baking dish, if desired. Bake in preheated oven until apples are soft or begin to split (30 to 45 minutes at 425°F).

Serve warm from the oven topped with a generous dollop of homemade raspberry jam with whipped cream, or vanilla ice cream. Lightly sprinkle with cinnamon to taste.