You must try this traditional Austrian Kaiserschmarrn recipe. Make an Old World pancake treat to die for! This is an easy-to-make Austrian dessert known as the Emperor's Pancake.

It's essentially a caramelized fluffy pancake stirred and split apart with a fork into small (schmarren) bite-size pieces while frying.

Serve the delicious pancake pieces as a special treat after a light meal, a breakfast dish, or as a tasty meal on its own for Sunday bunch. This is NOT your regular pancake. Its taste is amazing!

How to Make Kaiserschmarrn 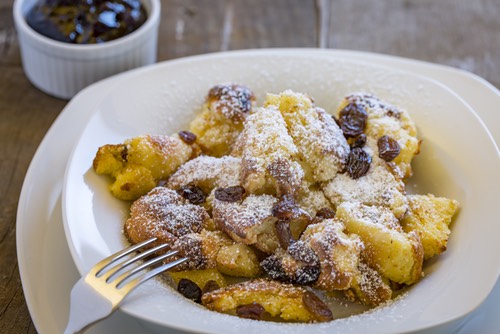 In its authentic form, the traditional Austrian Kaiserschmarrn recipe is for a caramelized pancake made from a batter of eggs, cream, flour, sugar, and rum-soaked raisins mixed in a large bowl using a wooden spatula.

It is fried in butter in a large frying pan and shredded using two forks into pieces while frying over a medium heat to a golden brown.

The eggs are often separated and the whites beaten to stiff peaks to add a puffy lightness to the sweet fluffy pancake.

The dessert is served hot, sprinkled with powdered sugar or confectioners' sugar, and topped with either applesauce, plum sauce, plum compote, or homemade plum jam preserve.

The pancake dessert can also be served with a side of fruit compote, or you can add a topping of ripe fresh fruit in season, maple syrup, whipped cream, ice cream, sprinkle vanilla sugar, or sprinkle raisins on top for a sumptuous dessert.

German Cookery for the English Kitchen (1906) 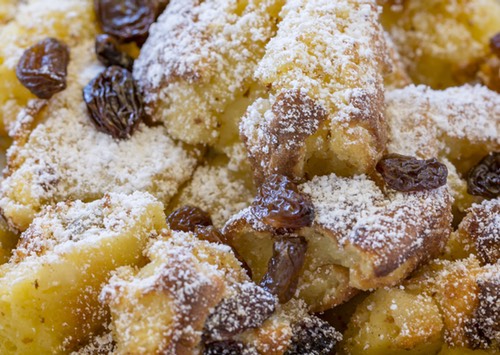 Mix all ingredients, except the butter, into a smooth batter. Fry this brown on both sides in the melted butter. Then cut or use a fork to tear pancake into smaller pieces and fry each crisply. Serve shredded pancake on a hot dish and sprinkle over with a little sugar and lemon zest to serve. For 6 persons. 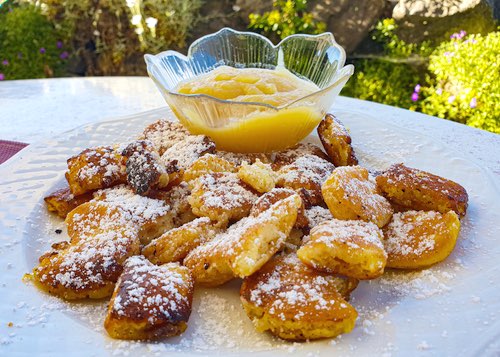 Kaiserschmarrn Served with Applesauce on the Side
(Source: ©4kclips/Depositphotos.com)

For this Austrian Kaiserschmarrn recipe whisk the yolks of 5 eggs with 1 pint of cream, or rich milk, and beat the whites to stiff peaks. Add to the egg yolks and cream 4 ounces of flour, salt, and 1 tablespoonful of sugar, 1 ounce of rum raisins, and 1 ounce of chopped almonds.

Then add the stiff egg whites (the beaten egg whites add lightness), stir and fry on a griddle with melted butter while tearing into small pieces, either the whole amount or in 3 parts.

Let it brown; when light, sift it with icing sugar and serve with fruit preserves or hot vanilla or wine sauce. 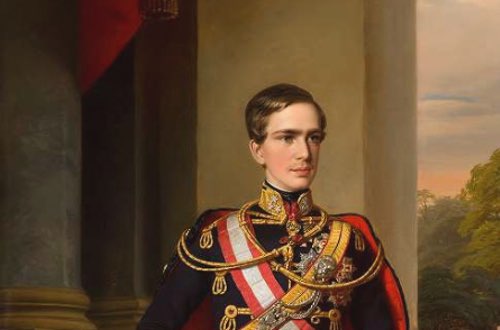 Kaiserschmarrn is a favored dessert meal in Austria, Germany (Bavaria), Hungary, and nearby regions. It derived its name Kaiserschmarrn from the words "Kaiser" and "Schmarren" which combined roughly translate as the "emperor’s mess."

Originating from Alpine recipes and considered Austrian cuisine, it eventually became identified as a traditional Austrian pancake dish calling for the fanciest ingredients and served in fine restaurants.

The first Kaiserschmarrn was prepared for the Austrian Emperor Franz Joseph I (1830-1916) and there's more than one story as to its invention.

One popular story relates that the Kaiser and his wife Empress Elisabeth were taken to a farmer’s home to rest while touring a remote area of the Alps.

The humble herdsman decided to make his royal guests a pancake using the fresh cream, eggs, and butter he had at hand. However, in his nervous haste while attempting a perfect flip, he accidentally scrambled the pancake and served it topped with homemade jam to cover the mess. The Kaiser loved it and after instructing his royal chef how to make it, it became one of his favorite meals.

Traditional Austrian Kaiserschmarrn recipes called for only basic ingredients such as raisins and sometimes chopped almonds, but eventually chefs added their favorite ingredients to the pancake batter such as apple pieces, apple jam, cherries, plums, and currants to create Kaiserschmarrn as we enjoy it today.