Grandma's collection of 20 old fashioned dessert sauce recipes will help you to make perfect toppings for your homemade puddings and other desserts.

When I had been a young boy, I loved it when she served her delicious puddings with a sweet-tasting sauce. She knew better, though, than to let me add my own, since I would end up with more sauce than pudding!

I still love sauces and toppings, though sometimes I simply prefer a little heavy cream and a light sprinkle of sugar on my hot puddings and pies. If you like creamy, delicious sauces on your puddings, you will love these! 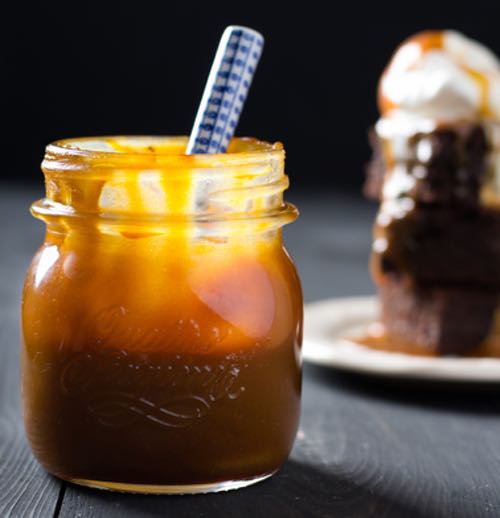 Sauce to Pour On Cake

Mix sugar and flour with a little of the water. Then add the other ingredients and bring to a boil to thicken. I have tried this, and you may want to change it to your tastes. I just make it as I go.

Boil all together slowly, removing the scum as fast as it rises; then strain through a sieve. This is very good with dumplings or most puddings. 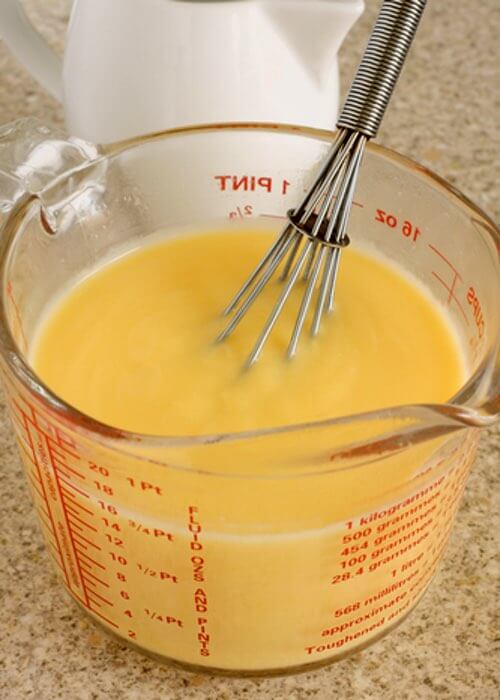 One cupful of sugar, two beaten eggs, one pint of milk, flavoring to taste, brandy or wine, if preferred.

Cream together a cupful of sifted sugar and half a cupful of butter, add a teaspoonful of ground cinnamon and an egg well beaten.

Boil a teacupful of milk and turn it, boiling hot, over the mixture slowly, stirring all the time; this will cook the egg smoothly. It may be served cold or hot.

For this hot dessert sauce recipe, put half a pint of new milk on the fire and when it boils stir into it one teaspoonful of wheat flour, four ounces of sugar, and the well-beaten yolks of three eggs; remove it from the fire and add the grated rind and the juice of one lemon; stir it well and serve hot in a sauce tureen.

This old fashioned dessert sauce recipe with its delicious caramel flavor makes an excellent topping to pour over white cake to make a quick dessert. Mom never added the wine or brandy, and it still tasted amazing.

Place over the fire a saucepan; when it begins to be hot, put into it four tablespoonfuls of white sugar and one tablespoonful of water.

Stir it continually for three or four minutes, until all the water evaporates; then watch it carefully until it becomes a delicate brown color.

Have ready a pint of cold water and cup of sugar mixed with some flavoring; turn it into the saucepan with the browned sugar and let it simmer for ten minutes.

Then add half a glass of brandy or a glass of wine. However, the wine or brandy may be omitted if preferred.

Cook well for three minutes. Take from the fire and add a piece of butter as large as a small egg; when cool, flavor with a tablespoonful of vanilla or lemon extract.

This old fashioned dessert sauce recipe is so SIMPLE, yet it's always a popular favorite with the family.

Cream or rich milk, simply sweetened with plenty of white sugar and flavored, answers the purpose for some kinds of pudding, and can be made very quickly. 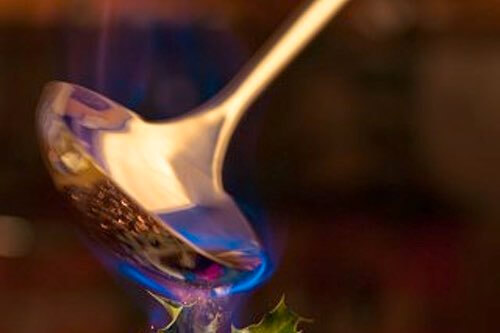 This old fashioned dessert sauce recipe isn't just for plum puddings, as it can also be used whenever you need a delicious topping for other kinds of dessert.

It can also be made without the wine or brandy; simply flavor it with almond or vanilla and you will have a deliciously creamy topping sauce.

Cream together a cupful of sugar and half a cupful of butter; when light and creamy, add the well-beaten yolks of four eggs.

Stir into this one wineglass of wine or one of brandy, a pinch of salt, and one large cupful of hot cream or rich milk. Beat this mixture well; place it in a saucepan over the fire, stir it until it cooks sufficiently to thicken like cream. Be sure to not let it boil. Delicious!

To make this old fashioned dessert sauce recipe, simply melt the brown sugar and butter in a large saucepan, add water, and boil to the desired syrup consistency. Vanilla may be added for flavoring, if desired.

Here's a basic hard sauce recipe that Grandma used. You can't get more basic than this: 1/2 cup butter, 1 cup sugar (fruit sugar). Cream together and flavor to taste. Keep cold for serving.

"I would like to make a mince pie with hard sauce, and I need the dessert sauce recipe. Does anyone have a good, old fashioned recipe for hard sauce? I'd love to have a copy of it."

Here's one and it's very simple. We always made hard sauce by mixing confectioner's sugar with softened butter and adding in a dash of vanilla extract for flavor.

This tops mince pie — and is enhanced if you wish by adding brandy or brandy sauce as well, but that is entirely optional. —Susan

Beat butter, sugar, cornstarch, lemon, and vinegar to a cream; pour the water, boiling, on them, and let it boil five minutes. Nice with any sweet pudding. —Mary G. Smith, Temperance Cook Book (1887)

2 cups white sugar, 2 cups water, 4 cups fresh or frozen cranberries. Boil sugar and water for 5 minutes, add cranberries, and boil for another 5 minutes, without stirring, until all the cranberry skins open. Remove from heat and allow to cool while it thickens.

Makes about 1 quart of sauce that's great for a pudding topping, or for serving with chicken or turkey.

The best sauce to suit me is made by using a rich cream with plenty of coarse, pulverized sugar, so the spoon will fetch it up from the bottom of the boat, or bowls, at every dip — and I like to dip deep every time; milk does very well but it is well known that it is not so rich as cream; but half and half does excellently.

Use any flavoring added you please, grated nutmeg is the most common with cream sauce. —Dr. Chase

Cream Sauce for Any Pudding

A tablespoonful of flour rubbed smooth in a little cold milk; pour it into 1 cup of boiling milk, having sugar, 1 cup, rubbed well with butter, 1/2 cup, and as soon as the milk comes to a boil again put in the creamed sugar and butter, and continue to boil 2 or 3 minutes only, and serve, both pudding and sauce, hot.

Quick Sauce for Almost Any Pudding

Eat with sugar and cream, if you have it; if not rub 1 butter to 2 sugar, with a little nutmeg, if the pudding is not highly flavored. Almost any pudding is nice to be eaten with plenty of sugar and rich cream.

Even milk does pretty well, if rich with sugar and nutmeg; most people like the flavor of nutmeg, at least I have yet to find the first one who does not. —Dr. Chase

Boiling water, 3 cups; sugar, 1/2 cup; butter, half the size of an egg. Mix. Boil a lemon and cut it into small pieces and add to the sauce, putting at least one piece to each dish of pudding in serving. —City Hotel, Winfield, Kansas.

Sugar, 2 cups, dissolved in boiling water, 1/2 pint; flour or cornstarch, 2 tablespoonfuls, worked smooth, in cold water, 1 cup, and stirred into the boiling sugar, with nice butter, the size of an egg (hen's egg).

Then add two or three tablespoonfuls of good vinegar (more or less as a sharp or mild taste is preferred); or brandy, or good wine, in like quantities to suit the taste of self or guests, with cinnamon, nutmeg, or other flavor as you like.

Lemon Sauce for Any Pudding

One large cup of sugar; nearly 1/2 cup of butter; 1 egg; 1 lemon, all the juice, and half the grated peel; 1 teaspoonful nutmeg; 3 tablespoonfuls boiling water.

Cream the butter and sugar, and beat in the egg whipped light; the lemon and nutmeg. Beat hard 10 minutes, and add a spoonful at a time the boiling water.

Put in a tin pot or pail, and set within, or upon, the uncovered top of the kettle, which you must keep boiling, until the steam heats the sauce very hot, but not to boiling. Stir constantly. —Julia M. M., the Western Rural

Remarks. —I see this old time dessert sauce recipe is modified, slightly, from one of Mrs. Harland's in "Common Sense in the Household," still it will be found a very nice sauce, for any pudding.

The principles given by Julia are all correct, but most people use twice as much sugar as butter in making sauces. Cooks can suit themselves.

In the folksy manner for which he became famous as an author, the "Old Doctor" goes on to add the following words of wisdom to his Remarks — practical words that we would all do well to heed if we desire success.

Experience is necessary to do things well. The author, when he began his work of making "receipt books," had great difficulties to overcome; but twenty years of experience enables him to tell at a glance now what formerly would take a long time, and often several tests to accomplish.

I used one of the sauces here, and it was the perfect finishing touch to my Thanksgiving dinner earlier this afternoon. —Maureen, Ontario

You'll absolutely love the country-kitchen flavors of the toppings made using these old fashioned dessert sauce recipes. They will make your favorite puddings taste extra-special.

Bread puddings are especially good when eaten with a homemade sauce and many of these sauces are excellent with them, and they make a great sauce to pour on cake too. They also make delicious toppings for your ice cream sundaes and pancakes.