Grandma's old fashioned bread pudding recipes will enable you to make one of the most delicious homemade desserts you've ever tasted. These traditional bread puddings are best enjoyed while still warm from the oven to top off any home-cooked meal.

Now, you can serve your friends and family the same puddings that Grandma enjoyed. Enjoy serving an old time comfort food that's sure to impress. 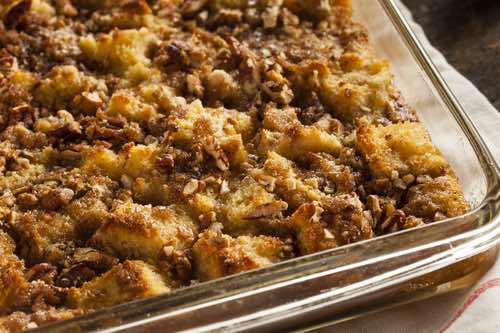 Cut bread in slices about 1/2 inch thick, remove the crust and line a pudding basin with the slice.

Sprinkle over a little sugar, and place a slice of bread over alternating layers of fruit and bread sufficient to fill the basin.

Tie up in a cloth and boil as usual. Makes an excellent dish served up cold with a coating of whipped white of egg and castor sugar. This is an Old Country dessert favorite.

Whip up the cream until stiff, then add the yolks of the eggs, the salt, sugar, vanilla, and the whites of the eggs beaten to a stiff froth. 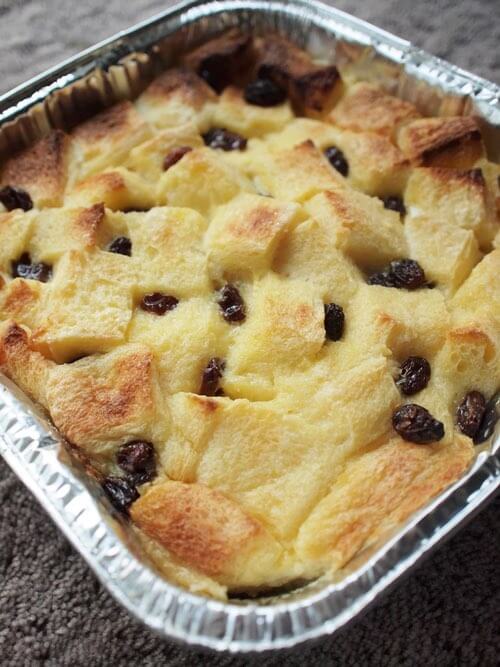 Note: This recipe calls for half and half cream, but the original recipe called for heavy cream.

2. Boil water on the stove top or in an electric kettle.

4. Place your cake pan inside a large roasting pan (preferably with handles); Place the roasting pan in the oven. Fill the pan with water until it is half the height of the cake pan.

5. It is important to add the water after the roasting dish is in the oven.

CAUTION: Attempting to move a pan filled with both hot water and the dessert can end in disaster and injury.

6. BAKE for 35 to 45 minutes or until a knife inserted in center comes out clean.

7. Once baking is complete, remove cake pan and leave the water bath in oven until cool.

I have never actually had bread pudding before, and I am very pleased that this is the first time I had it!

One of the best old fashioned bread pudding recipes ever! Thanks! I will definitely tuck this one away in my recipe box. —Anon.

I just wanted to let Mike know that the kids (as I call them) made your old fashioned bread pudding recipe, and they said, "Mom that's it!" Loved it! —Helen

Stale Bread Pudding With or Without Fruit

Bread that has been soaked in cold milk or water will be more crumbly and light in the pudding.

Directions: Soak the bread in water sufficient to cover it (milk is much better); whip the eggs, then the sugar into them; pick over the raisins, mash and look over the currants, melt the butter, and mix all nicely together, having mashed the bread crumbs into a pulp; and if not sufficiently moist, add a little more water or milk, whichever you are using, to make a suitable batter.

Having lined the pudding dish with a nice crust, pour in the mixture and put a thin crust over of the same; bake in a moderate oven (350°F) about 1 hour; serve with any of the sweet sauces preferred.

Remarks. —Homemade dried fruit may take the place of the foreign kinds, remembering that home-dried currants require double the amount of sugar. If no fruit is used, you will still have a nice pudding. And if you cut prunes in bits from the pit, you also have a nice pudding.

"A pudding may be made of small pieces of bread, if the family taste does not rebel. (I never see the family taste rebel against so good a pudding.) The bread should be broken fine, covered with milk, and set on the stove where it is not too hot, until it becomes soft.

"Remove and stir in a tablespoonful of sugar, 1 of butter, a small teaspoonful of salt, also a pinch of cinnamon, or allspice, and, if liked, 1/2 cup of chopped or cut raisins, or dried raspberries.

"When cool enough, stir in an egg, well beaten, and bake 1 hour in a moderate oven (350°F). To be eaten with cream and sugar, or pudding sauce, as preferred."

Remarks. —This is like what my wife used to make, except she used to put the raisins in whole, to which I should never object; nor did I, as above remarked, "ever see the family taste rebel against it." —Dr. Chase

This old fashioned bread pudding recipe calls for puff paste that's fashioned similar to pie crust, or you may substitute buttered bread, or regular pastry. It should taste delicious whatever way you make it.

Then beat, sugar 1-1/2 cups, to a cream with 4 eggs, and butter, 2 tablespoonfuls; grate in the yellow of a lemon, and a bit of nutmeg, and a pinch of cinnamon, if liked.

Beat all well together, and pour into a pudding dish lined with nice puff paste, and bake (350°F) about 1 hour.

The juice of the lemon to be used in making whatever homemade sauce you prefer.

Remarks. —The author feels very sure you will ask St. James to call again! Bread, buttered well on each side, may be substituted for the puff paste to line the dish.

Naples, or Duke of Cambridge Pudding

This old fashioned bread pudding recipe from the Victorian Era is named after HRH Prince George, 2nd Duke of Cambridge (1819-1904), the grandson of King George III, and the cousin of Queen Victoria.

Candied lemon, orange and citron, each, 1 ounce; butter and pulverized sugar, each, 6 ounces; yolks of 4 eggs; rich puff paste, or well-buttered bread, to line the dish.

Chop the candied peel finely, put the rich crust or paste into the dish, else line it with bread well buttered on both sites; then put in the chopped mixture; warm the butter and sugar together, adding the well-beaten yolks, stirring over the fire until it boils; then pour this over the other and bake in a slow oven 1 hour;

This makes you two puddings for variety's sake — make one way at one time, and the other way next time.

Boil 1 pint of milk, with a piece of cinnamon and lemon peel; pour it on 2 ounces of bread-crumbs, then add 2 eggs, 1/2 ounce of currants, and a little sugar: steam it in a buttered mold, or pan, for one hour.

Bread and Butter Pudding With Currants

Butter a tart-dish (pie plate) well, and sprinkle some currants all round it; then lay in a few slices of bread-and-butter; boil 1 pint of milk, pour it on 2 eggs well whipped, and then on the bread-and-butter slices: bake in a hot oven (425°F) for half an hour. The currants may be omitted when not convenient. 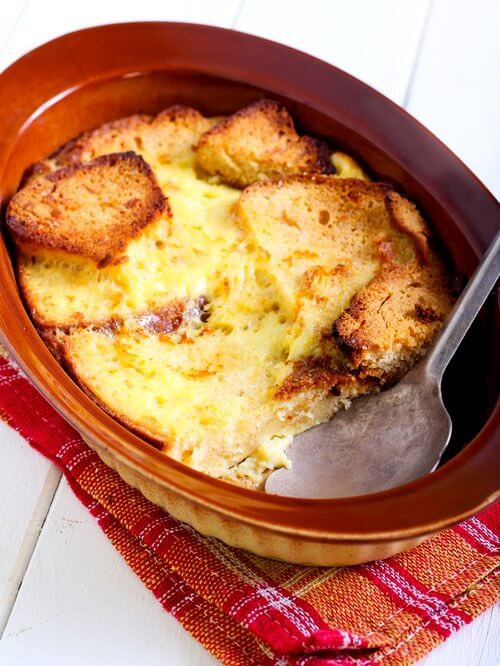 My Gran used to make this recipe for bread and butter pudding every week. —Lindsay

Stale bread (or not) sliced and buttered both sides. (I sometimes use panettone, brioche, or stale croissants.)

Use as many bread slices as fit the Pyrex® baking dish you want to fill. Sprinkle sugar and dried fruit between the layers.

Mix 1 cup cream, 1 cup milk, plus one egg, and pour over top — make up as much of this as you need. The liquid should not quite cover the top layer. Sprinkle sugar over the top.

Submitted by a Reader

Directions: Pour mixture over bread crumbs. Mix and bake in slow to moderate oven (340°F) for 40 to 60 minutes. Serve with a favorite bread pudding sauce.

Beat the yolks very light, and having soaked the bread crumbs thoroughly in the milk, stir these together, then the butter, and seasoning with the soda, lastly the whites beaten stiff.

Bake (350°F) to a fine brown, and eat hot with pudding sauce. Any sauce that is quite sweet will answer, there being no sugar in the pudding.

Three eggs, one cup sugar, one cup grated rye bread crumbs, one teaspoon each cinnamon and cloves. Beat yolks of eggs and sugar together; add crumbs and spice, then add whites of eggs.

Butter the dish well, and bake in oven (350°F) about twenty minutes or so. When done, pour over one cup red wine. Serve with cream.

Bread puddings are among the most popular dessert recipes searched for by home cooks today. They were extremely popular in Grandma's day, as they were an excellent way to use leftover stale bread and rolls in an age when nothing was ever wasted.

And they are still extremely popular today simply because they're so good tasting and so easy to make!

These old fashioned bread pudding recipes are quite versatile too. You can add almost any kind of bread, biscuits, or buns. Raisin bread, buttery croissants, and fruit breads are delicious in a pudding!

Aside from raisins, you can incorporate almost any fruit in season. Mom loved to add sliced apples and cinnamon to hers, and it was delicious. The enticing aroma while it baked in the cook-stove oven filled the old farm kitchen. We could hardly wait for mealtime!