These old fashioned fruit pudding recipes are so easy to make, and the homemade puddings are extremely good. One of my favorite desserts is the Blueberry Grunt that Mom liked to make in blueberry season. It's colorful and very tasty.

Also, the Raspberry Cracker Pudding and the Fruit Betty are both totally delicious! Be sure to try them all. 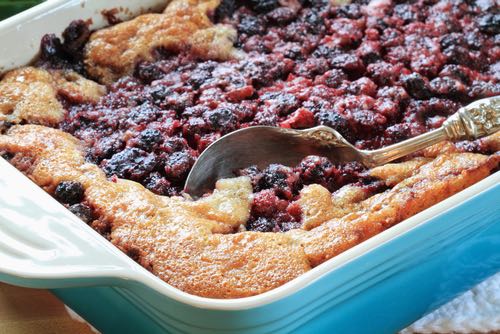 It can be made using a variety of seasonal fruits, and it's named after the grunting sounds it sometimes makes while cooking in a covered pot. 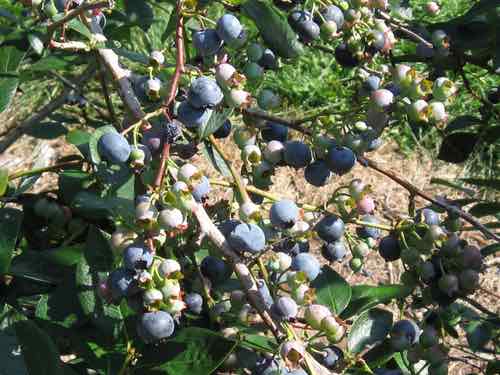 To make this Canadian fruit pudding recipe, put 1 quart ripe blueberries, 3/4 cup sugar, and 1/2 cup water in a large pot, cover with a lid, and boil gently until there's plenty of juice.

Drop the Dumpling dough by spoonfuls onto the hot blueberries in the pot. Tightly cover the pot and cook for about 15 minutes without removing the lid.

Serves best while hot. It's also good when made with raspberries, blackberries, rhubarb, apples, or strawberries in season.

To Make the Dumplings:

Sift the flour, baking powder, salt, and sugar into a bowl. Cut in the butter and shortening and add enough milk to make a soft biscuit-like dough. 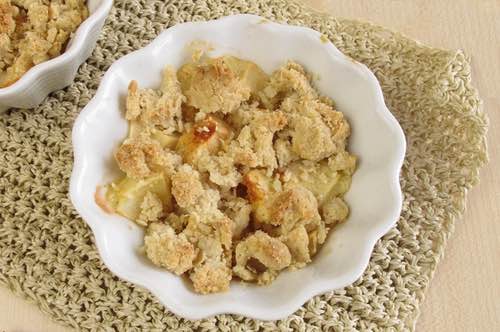 This old fashioned fruit pudding recipe is easy to make and delicious when prepared with almost any fruit in season.

Into a buttered pudding dish put a layer of raw fruit — sliced apples or peaches or raspberries are especially good in this dessert.

Sprinkle with sugar. Add a layer of soft, stale bread crumbs, dot with bits of butter, add another layer of fruit and repeat to fill the dish, having a layer of crumbs and dots of butter on top.

Bake in the oven (350°F), covering closely for the next 20 minutes or so of cooking to allow the steam from the fruit to moisten the crumb topping.

Mix as for biscuits and add raisins or dates, your preference. Quickly put mixture in greased 1-1/2 quart casserole.

Combine above ingredients and pour mixture over batter. Bake about 35 minutes at 375°F. Serve while warm. —L. Morrison

Sift dry ingredients into mixing bowl. Add milk and mix together. In casserole, add rhubarb and sprinkle with sugar to sweeten to taste.

Crush one-half pint strawberries with one-quarter pound sugar. Whip one pint of cream until stiff, then add the crushed strawberries, mix well, and serve in saucers.

Raspberry, peach, or banana whipped cream can be prepared in the same manner. This Hotel St. Francis restaurant dessert is so easy to make and so delicious to eat. Enjoy!

For this old fashioned fruit pudding recipe you need one large teacupful of cracker crumbs, one quart of milk, one spoonful of flour, a pinch of salt, the yolks of three eggs, one whole egg, and half a cupful of sugar.

Flavor with vanilla, adding a little pinch of salt. Mix together. Bake in a moderate oven (375°F).

When done, spread over the top, while hot, a pint of well-sugared raspberries.

Then beat the whites of the three eggs very stiff, with two tablespoonfuls of sugar, a little lemon extract, or whatever one prefers.

Spread this meringue over the berries and bake a light brown. Serve with a fruit dessert sauce made of raspberries, if convenient.

Sift together a pint of flour and a teaspoonful of baking powder into a deep dish, sprinkle in a little salt, adding also a tablespoonful of melted butter. Stir into this gradually a pint of milk; when quite smooth, add four eggs, yolks and whites beaten separately.

Now add enough more flour to make a very stiff batter. Any kind of fruit may be stirred into this: a pint of berries, or sliced fruit. Boil two hours. Serve with cream and sugar, wine sauce, or any sweet sauce.

Remove skin from stalks of rhubarb, wash and cut into half-inch pieces a sufficient quantity to half fill a medium-sized agate or earthenware pudding dish. Place in a stew-pan on range, cook slowly with a couple tablespoons of sugar and a very small amount of water.

Sift together in a bowl 1 pint of flour, 1-1/2 teaspoons of baking powder and a pinch of salt. With a knife cut through the flour 2 tablespoonfuls of butter, moisten with one beaten egg and sufficient milk added to make a soft dough or batter.

Drop tablespoons of this thick batter over top of dish containing hot stewed rhubarb. Place at once in a hot oven (400°F), bake quickly until crust is a light brown.

Serve on individual dishes, placing over each a couple tablespoonfuls of the following vanilla sauce. The combined flavor of rhubarb and vanilla is delicious.

Beat 1 egg very light, add 1 cup of light brown sugar and 1 teaspoon of vanilla flavoring. Beat all together until foamy. Serve at once, cold, on the hot pudding.

The peach pudding recipe was given to Mary by a friend who was an excellent cook. From this dough may also be baked excellent biscuits.

For the dough place in a bowl 1 pint of flour sifted with 2 teaspoonfuls of Royal baking powder and a pinch of salt. Cut through this a scant 1/2 cup of butter. Mix this with sufficient sweet milk to make a soft dough.

Roll out dough half an inch thick, cut in strips and encase whole, ripe, pared peaches, leaving top and bottom of the peach exposed. Or solid canned peaches may be used.

Put two halves of peach together and place a strip of dough around the peach. Pinch dough well together, place in a bake dish.

Prepare a syrup of 2 cups of sugar and 1 cup of water. Let come to a boil, pour around the dumplings and bake a half hour in a moderately hot oven (375°F). These are delicious.

This old fashioned fruit pudding recipe was given to Mary by a friend who called it her emergency pudding, as it may be easily and quickly prepared from canned sour cherries from which liquid has been drained, or any tart fruit, when fresh fruit is not in season.

Add 1 cup of sifted flour containing 1 teaspoonful of baking powder, and 1 cup of huckleberries, pitted cherries, or raisins, and bake (375°F). Serve with milk or any sauce liked.