You'll enjoy these forgotten pudding recipes that I discovered in Grandma's recipe collection. These old fashioned puddings are rarely seen today, and it's a mystery why since they are so delicious.

Surprise your friends with an old fashioned Toby Pudding, or maybe a Transparent, Sunderland, Saucer, or restaurant-style Delmonico's Pudding.

Pick one and make yourself a special treat. Common in farm kitchens a century ago, they make perfect retro desserts for serving to your family today. 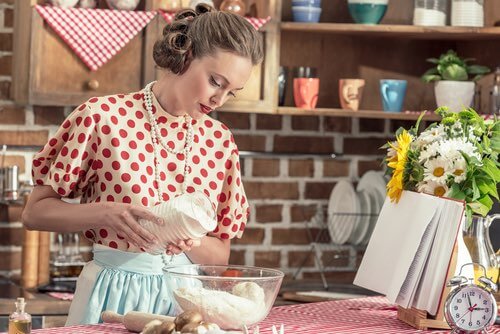 Use stale bread and two cupfuls of lemon or other fruit-flavored jelly. Cut the bread into small dice.

Fill a buttered mold nearly full of the dice, pour over it the jelly, hot, and leave in a cool place until it has set. Turn out when firm and serve with sweetened whipped cream.

A small cupful of fresh butter warmed, but not melted; one cupful of sifted sugar creamed with the butter; a teaspoonful of nutmeg, grated; eight eggs, yolks and whites beaten separately.

Beat the butter and sugar light, and then add the nutmeg and the beaten eggs, which should be stirred in gradually; flavor with vanilla, almond, peach, or rose water; stir hard; butter a deep dish, line with puff paste, and bake (375°F) about half an hour. Then make a meringue for the top and brown in oven. Serve cold.

Wash two teacupfuls of rice and boil it in one teacupful of water and one of milk, with a little salt; if the rice is not tender when the milk and water are absorbed, add a little more milk and water.

When the rice is tender, flavor with vanilla, form it into little balls, or mold it into a compact form with little cups; place these rice balls around the inside of a deep dessert dish, fill the dish with a rich soft custard and serve either hot or cold.

The custard and the balls should be flavored with the same flavoring preferred.

This old fashioned forgotten pudding recipe is unique in that it calls for the batter to be baked in several saucers.

Butter well three saucers, half fill them with the mixture and bake in a quick oven (400°F) about twenty minutes, or until done.

Remove them from the saucers when cool enough, cut in half, and spread a thin layer of preserves between each half; close them again, and serve with cream.

This forgotten pudding recipe is easy to make and calls for ingredients readily found in most kitchens. The predecessor to Cottage puddings, Sunderland puddings are quite delicious.

One cupful of sugar, half a cupful of cold butter, a pint of milk, two cupfuls of sifted flour, and five eggs.

Make the milk hot; stir in the butter and let it cool before the other ingredients are added to it; then stir in the sugar, flour, and eggs, which should be well whisked and omit the whites of two; flavor with a little grated lemon rind and beat the mixture well.

Butter some small cups, rather more than half fill them; bake from twenty minutes to half an hour (about 375° F), according to the size of the puddings, and serve with fruit, custard, or wine sauce, a little of which may be poured over them.

They may be dropped by spoonfuls on buttered tins and baked, if cups are not convenient.

Recipe for Wine or Brandy Sauce:

Take one cupful of butter, two of powdered sugar, the whites of two eggs, five tablespoonfuls of sherry wine (or brandy), and a quarter of a cupful of boiling water.

Beat butter and sugar to a cream, add the whites of the eggs, one at a time, unbeaten, and then the wine or brandy. Place the bowl in hot water and stir till smooth and frothy. 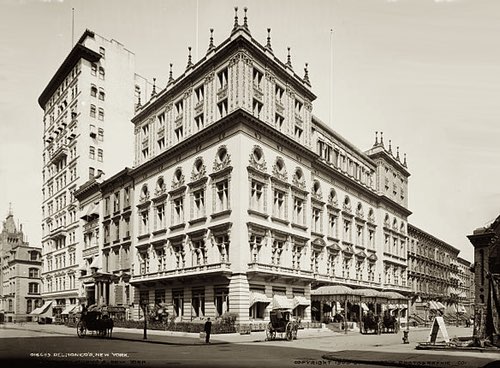 This old fashioned Delmonico's Restaurant-style pudding makes a very delicate and delicious dessert. Be sure to try this forgotten pudding recipe!

Delmonico's became famous for its signature dishes and restaurant desserts. It was claimed by some New Yorkers that chef Ranhofer invented Baked Alaska at the Delmonico's restaurant in 1867; however, it cannot be proven beyond a doubt.

Brothers John and Peter Delmonico opened their first restaurant in 1827 at 23 William St, New York City, and they moved and expanded their business several times afterwards. The founding family sold Delmonico's in 1919.

Mix the cornstarch with a little cold milk; mix all together and stir into one quart of milk just as it is about to boil, having added a little salt; stir it until it has thickened well; pour it into a dish for the table and place it in the oven (375°F) until it will bear icing.

Place over the top a layer of canned peaches or other fruit (and it improves it to mix the syrup of the fruit with the custard part); beat the whites to a stiff froth with two tablespoonfuls of white sugar to an egg; then put it into the oven until it is a light brown.