These old fashioned trifle recipes are so easy to make, yet your finished dessert will look elaborate and taste as though you have spent hours in the kitchen.

You must simply make an English trifle for your next party or family get-together. A dessert that has proved this popular for centuries has to be good. 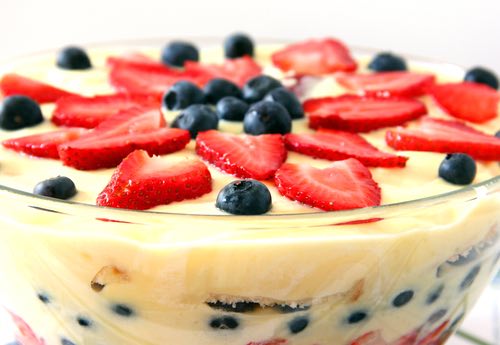 A fella goes to the doctor, and he's got a jelly in one ear and a custard in the other, and the doctor said, "What's the matter with you?" And he said, "I'm a TRIFLE deaf." —Tommy Cooper, British Comedian

Fill a glass bowl with a layer of sliced sponge cake. Cover with red currant jelly or raspberry jam, then add more cake slices. Sprinkle over this a handful of shredded coconut and 1/2 cup chopped nuts of choice.

Pour over all a CUSTARD made of 1 pint milk, 2 eggs, 2 tablespoonfuls sugar. Boil custard until it thickens, and add a pinch of salt and vanilla to taste. When cold serve with whipped cream. —N. Hampson, Mount Forest, Ont.

This is a retro trifle dessert from the 1950s.

Arrange 1/2-inch slices of sponge roll in bottom of dish, and drizzle sherry over them.

Make custard (see custard instructions in above recipe) and while warm, spread on Jello. Top with whipped cream and decorate with fresh fruit slices. 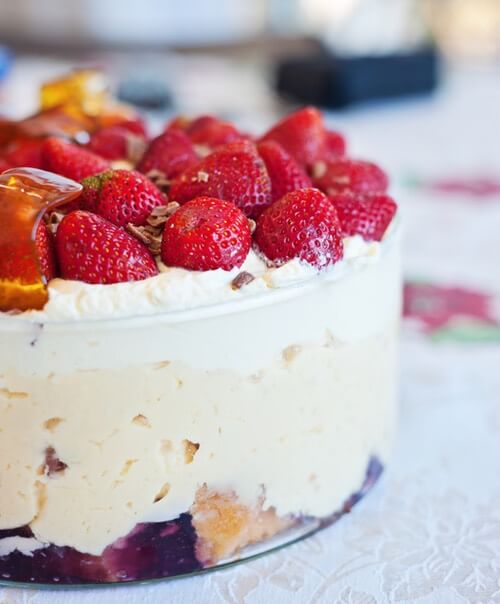 Place several alternate layers of Savoy Biscuit and bitter almond Macaroons in a handsome glass bowl, or dish, and saturate them with the best Madeira wine; cover the surface of the top layer with any kind of jelly, jam, or marmalade (red currant jelly is generally preferred);

Then take the whites of four eggs, half a pound of pulverized loaf sugar, the juice of one sound lemon, a little rose water, and one pint of cream; whisk all to a froth, and put lightly into the bowl, in the shape of a cone; and ornament according to fancy, with colored sugars.

Take a deep, glass dish, lay the bottom closely with slices of cold pound cake, or sponge cake, either will do, then pour on a quart of wine, fill the top with rich whipped cream; ornament with preserves, cut in delicate bits.

Line mold with crystallized fruits and macaroons; put on one-half quantity, then add more fruit, and then the macaroons. Set away till formed.

One pint of cream well beaten, sugar and flavoring to taste. One quarter of a pound of macaroons which have soaked in sherry for a few minutes.

Put in a deep dish alternate layers of macaroons and cream. Preserved cherries and almonds (whole) are a great improvement. —Miss Ruth Scott

About the Old Fashioned Trifle Recipes

Trifle is a most popular pudding-like dessert consisting of layers of sponge cake or macaroons soaked in wine and placed in a large bowl, then covered with a rich egg custard and often topped off with freshly whipped cream.

Old fashioned trifle recipes first appeared in Britain around 1596, and they've seen very little change since the 1700s. Sometimes layers of fresh or preserved fruits are added for color and flavor, and a fruit juice can be substituted for the wine, if preferred.