Choose one of the following moreish desserts and enjoy the wonderful Old Country taste: 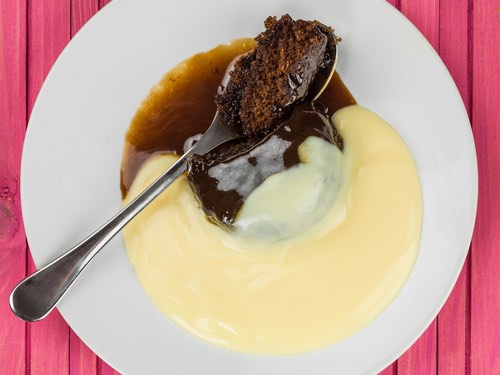 The traditional British dessert recipe for sticky toffee pudding is thought by many to have originated with a Mrs. Martin, chef of The Old Rectory Hotel in Claughton, Lancashire.

However, the yummy dessert dish might have a Canadian connection, since it's rumored that she had obtained its recipe from a Royal Canadian Air Force officer who stayed at her hotel during World War II.

Sticky toffee pudding consists of a moist sponge cake with chopped dates, and a toffee topping. It's often served with a homemade custard sauce or vanilla ice cream.

Sift flour and baking powder into a bowl. In a large bowl, beat together the butter, sugar, beaten egg, and about half of flour mixture. Gradually mix in remainder of flour mixture and beat batter for about one minute.

Pour boiling water over the chopped dates, stir in baking soda and vanilla, then add to batter and mix in well.

If you love sticky toffee pudding topping, you might want to double the topping ingredients in this recipe to ensure you have lots to pour over the pudding and run down its sides. Be over generous folks. It's so good!

Add brown sugar, butter, and cream to saucepan, and bring to boil while stirring constantly, continue to stir and simmer for about 3 minutes. Remove from heat and pour over hot toffee pudding to serve.

1 pint milk, 1 tablespoon sugar, 2 eggs, 1 cup flour, 1 teaspoon baking powder, pinch of salt. Sift the flour, salt, and baking powder together. Add to this the well-beaten eggs and sugar, and mix all with the pint of milk. Mix all ingredients thoroughly. If too thick, add more milk.

Put a small piece of butter in a hot frying pan, then spoonfuls of the batter. When lightly browned, turn over, then fold on hot dish. Serve with powdered sugar and a squeeze of lemon.

A good traditional British dessert recipe. If baked (350°F) in one loaf, it will take about an hour — in two pans, about half an hour. Always test for doneness. —Mrs. E. B. Plympton

Mix 1/4 pound flour and 1/2 cup of milk, 1-1/2 ounces butter, juice of a lemon, and sugar to taste. Stir on the fire for 10 minutes, take off, and add the beaten yolks of 4 eggs and 2 tablespoonfuls of chopped almonds.

Pour into a pan and bake (325°F) just until done. Cut into strips and dust with sugar. —Traditional British Dessert Recipe from With a Saucepan Over the Sea

Spread black current preserves on the dough, roll up, tie in a cloth and boil 1-1/2 hours. Be sure to have the water boiling before putting the pudding in. Serve with a sweet pudding sauce.

Cream the butter, add sugar gradually, and beat thoroughly. Separate yolks from whites of eggs; beat yolks until thick and lemon colored, whites until stiff and dry, and add to first mixture. Then add milk, fruit, nuts, and flour mixed and sifted with mace, cinnamon, and soda.

Put in buttered deep pans, cover with buttered paper, steam three hours, and bake one and one half hours in a slow oven (325°F), or bake four hours in a very slow oven (275°F).

Rich fruit cake is always more satisfactory when done if the cooking is accomplished by steaming.

Cook raisins, suet, apples, citron, currants, and sugar slowly for one and one-half hours; then add almonds, spices, and brandy. 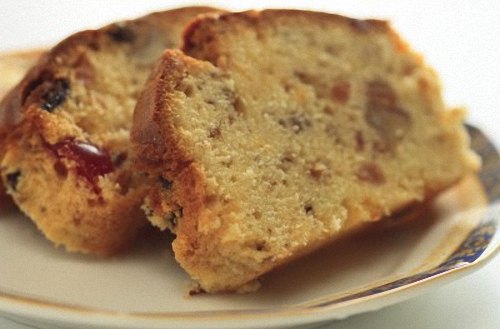 Beat butter and sugar to a cream, mix all the prepared fruit together — the almonds shredded, the cherries cut in half, and the prunes into small pieces — and beat the eggs until light.

Now mix alternately into the butter and sugar, the flour, eggs and fruit, when this is thoroughly well mixed, add the spice, brandy, browning, and soda.

Mix well again, then put the mixture into prepared tin, and bake in moderate oven (375°F) from four to five hours.

Fill a pudding dish with fresh fruit, and enough sugar to sweeten, but do not put sugar on the top as it tends to make the pastry heavy.

If the pastry is cooked before the fruit, place the pie in a cooler part of the oven to finish, with buttered paper over the top.

One cup of butter rubbed to a cream, with two cups of the very darkest brown sugar; add four eggs, one at a time, stirring each one well; then add a cupful of black molasses and one cup of hot, strong coffee in which you have previously dissolved one even-teaspoonful of soda. (Strain before adding to the batter.)

Sift four and one-half cups of flour, twice, adding two teaspoonfuls of cream of tartar in last, half a cupful of flour, sifting again before adding.

Add the following spices: nutmeg, mace, allspice and cloves, half a teaspoonful of each, one large cupful of raisins, seeded, and half a cupful of finely cut or chopped citron, dredge the raisins with flour, using some of which you have already sifted, not using more than four and a half cups in all.

Butter your cake tins and seed your fruit before beginning to make the cake; whole spices freshly pounded in a mortar are preferable to ground spices.

This quantity makes one good-sized cake and twelve gems, which if iced prettily makes quite a display.

About the Traditional British Dessert Recipes 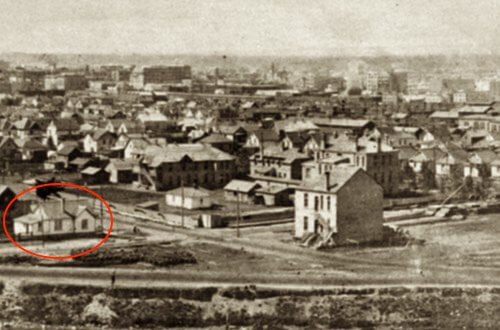 As a young girl, my Grandma McIlmoyle immigrated with her family from England to Canada in 1887. They built their homestead on the bleak Alberta prairie before moving to Calgary, and Old Country desserts such as the ones featured on this page served to remind them of their former home in Sheffield.

Now, thanks to these traditional British dessert recipes, you can taste the delicious Victorian Era desserts that Grandma once enjoyed. Get ready to enjoy a real treat. You'll appreciate the delicious, traditional taste of these classic dishes. 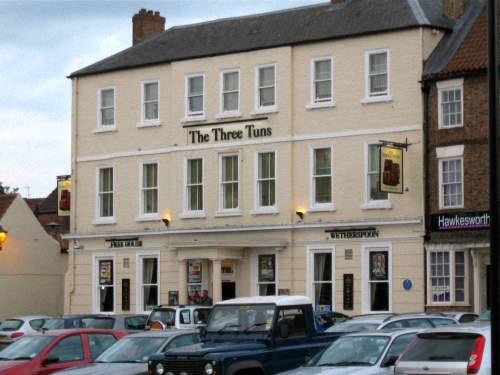 My wife Vicki and me vacationed in Thirsk, North Yorkshire, where we stayed at The Three Tuns Hotel and mostly ate in its Wetherspoon Pub.

We enjoyed delicious English meals of steak and kidney pie, fish and chips, and for dessert, the quintessentially British sticky toffee pudding. It's a traditional British dessert recipe that you must simply try to discover how good it really is!

The Three Tuns was originally built in 1698 as a Dower House for the Bell family, Lords of the Manor of Thirsk, and it was sold and converted to a coaching inn around 1740.

Our lodging at the quaint old inn, now a Wetherspoon Hotel, with its paneled dining room and beautiful Queen Anne staircase, was a special treat for us because of its earlier connection to my Bell ancestors.