These traditional Belgian dessert recipes are inexpensive and easy to make. As many know, Belgium is world-famous for its delicious desserts, pastries, and confections.

Discover how Belgian desserts possess an added touch that makes them extra special in taste and appearance. Enjoy making the following: 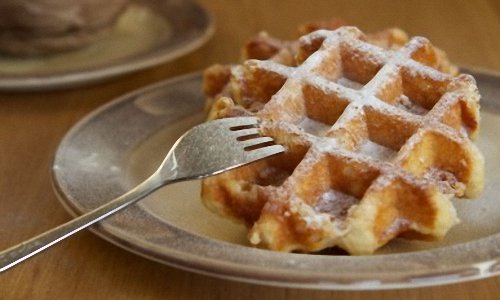 The Belgian dessert recipes have been sent by Belgian refugees from all parts of the United Kingdom, and it is through the kindness of these correspondents that I have been able to compile it.

It is difficult to give any general directions for sweets. They should be made to look attractive, and they should be constantly varied. —Mrs. Luck, The Belgian Cookbook Intro, 1915

Mix in an earthen bowl half a pint of flour, five yolks of eggs, a coffee-spoonful of castor sugar, half pint of milk (fresh), adding a pinch of salt and of vanilla; then two ounces butter melted over hot water. Then beat up the whites of four eggs very stiffly, and add them.

Butter a baking-tin or sheet (since most English households have not got a gaufre iron or flip waffle iron, which is double and closes up), and pour in your mixture, spreading it over the sheet.

When the gaufre is nicely yellowed, take it out and powder it with sugar.

Equal quantities of butter and flour, well mixed in a little beer; add also a pinch of salt. Make this paste the day before you require it; it is good for little patties and tarts.

This simple dish is much liked by gentlemen. Break five eggs in a basin, sweeten them with castor sugar, pour in a sherry glassful of rum. Beat them very hard till they froth.

Put a bit of fresh butter in a shallow pan and pour in your eggs. Let it stay on the fire just three minutes and then slip it off onto a hot dish. Powder it with sugar, as you take it to the dining-room.

At the dining room door, set a light to a big spoonful of rum and pour it over the omelette just as you go in.

Work all the ingredients together on a marble slab, to get the paste all of the same consistency. Make it into balls as big as walnuts, flattening them slightly before putting them into the oven. This sort of gingerbread keeps very well.

Butter six circular rusks, and put on them a layer of jam. Beat the whites of three eggs and place them on the rusks in the shape of a pyramid. Put them in the oven and color a little. They must be served hot.

Mix in a dish the yolks of four eggs with a little cornflour (or 1 tbsp cornstarch). When the milk boils, pour it very slowly over the eggs, mixing it well. Return it all to the pan and let it get thick without bringing it to the boil.

Add some chopped almonds, and turn the mixture into a mold to cool.

For this traditional Belgian dessert recipe, take a pound of apples and peel them. Cook them, and rub them, when soft, through a sieve to make them into a puree. Sweeten it well to taste with sugar, and scent it with a scrap of vanilla; then let it get cold.

Beat up three eggs, both whites and yolks, and mix them into your cold compote, and put all in a dish that will stand the heat of the oven. Then place on the top a bit of butter the size of a filbert and powder all over with white sugar.

Place the dish in an oven with a gentle heat for half an hour, watching how it cooks. This dish can be eaten hot or cold.

It often happens that you have among the strawberries a quantity that is not quite good enough to be sent to table as dessert, and yet not enough to make jam of.

Put these strawberries on to heat, with some brown sugar, and use them to fill small pastry tartlets. Pastry cases can be bought for very little at the confectioner's.

Cover the top of the tartlet when the strawberry conserve is cold with whipped cream.

Homemade cupcakes can be substituted for the "small round cakes" when making this traditional Belgian dessert recipe.

You will get at the confectioner's small round cakes that are smooth on the top; they are plain and are about two and one-half inches across.

Take one cake and cut it in halves, separating the top from the bottom. Cut the top piece right across; you have now two half moons.

Put some honey along the one straight edge of each half moon and stick it by that on the lower piece of cake, a little to one side. (A good nougat or boiled icing will answer instead of the honey.)

Do the same with the second half moon, so that they both stick up not unlike wings.

Fill the space between with a thick mixture of chopped almonds rolled in honey, and place two strips of angelica poking forward to suggest antennae. 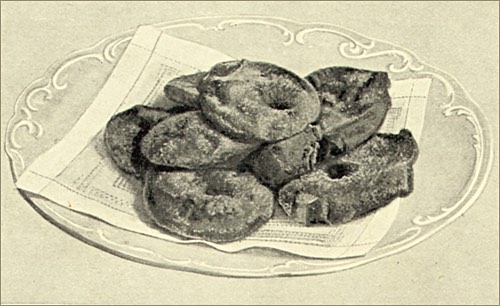 Put half pound of flour in a deep dish and work it with beer, beating it well till there are no lumps left. Make it into a paste that is not very liquid.

Peel and core some good apples, cut them into rounds, put them in the paste so that each one is well covered with it.

Have a pan of boiling fat and throw in the apple slices for two minutes. They ought to be golden by then, if that fat has been hot enough.

Serve them dusted with powdered sugar and the juice of half a lemon squeezed on them.

This old fashioned Belgian dessert recipe calls for the dessert to be served with ratafia biscuits, which are small, round, almond flavored cookies.

If unavailable in your local store, you can substitute almond flavored macaroons or amaretti cookies.

Boil up a quart of milk, sweeten it with nearly half a pound of sugar, and flavor with vanilla. Let it get cold. Beat up six eggs, both yolks and whites, mix them with the milk, put it all in a fireproof dish and cook very gently. Cover the top before you serve it with ratafia biscuits. 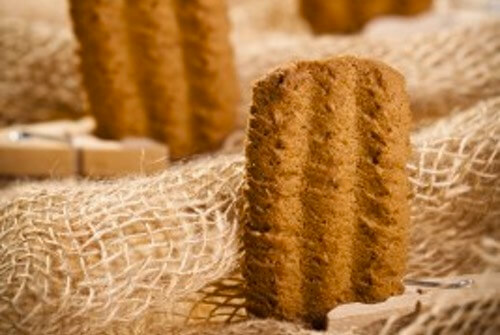 This traditional Belgian dessert recipe makes a Christmas cookie that originated in the North of France and Belgium.

The thin spice-flavored cookies were traditionally baked in rectangular molds that formed a distinctive design on the cookie, often the figure of a saint, and similar to the Dutch Speculaas windmill cookies.

The crunchy cookies were eaten as a treat by children on St. Nicholas' Day. It's an old fashioned Belgian treat that's perfect for serving throughout the Holidays.

Pound down half pound flour, four ounces brown sugar, three and a half ounces butter, a pinch of nutmeg, and the same of mace and cinnamon in powder.

Add, as well, a pinch of bicarbonate of soda. Make the paste into a ball, and cover it with a fine linen or muslin cloth, and leave it till the following day.

If you have no molds to press it in (I believe waffle irons and speculoos molds can be bought), cut it into rectangles, diamonds, or different shapes, and cook them in the oven on buttered trays.

Heat the waffle irons, butter them lightly, pour into the middle a teaspoonful of the mixture; cook to a golden brown on both sides of the cakes. When done, should be quite thin like an ice cream wafer.

These are delicious, but it is necessary to have the proper waffle irons.

Yeast cakes have been sold in different sizes formerly. So, it's easiest to calculate the dry yeast needed based on how much flour is called for in the original recipe.

When light add 1 cup of seeded raisins and enough flour to make a stiff batter.

Let this rise until it is twice the size, then shape in a round loaf and bake (375°F).

Brush over the top with the yolk of an egg.

Skin fine bananas and lay them whole in a baking dish. Sprinkle with sugar and grated lemon peel. Add the juice of 1 orange, 1/2 lemon, and 1/2 glass of sherry wine. Let them bake in a quick oven (425°F).

Put the bananas in a glass dish and pour over the sauce. Let get cold and serve.

Cook 1 pint of milk; add 1/2 cup of boiled rice and some currants; stir in the yolks of 2 eggs well-beaten with 2 tablespoonfuls of sugar. Remove from the fire. Add 1 teaspoonful of vanilla; then form into cylinders.

Dip in beaten egg and fine breadcrumbs and fry a golden brown. Sprinkle with pulverized sugar and put some red currant jelly on top and serve.

About the Traditional Belgian Dessert Recipes 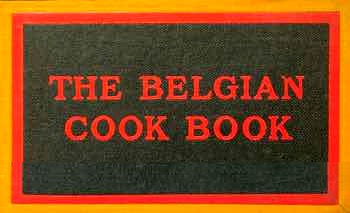 You will find several confections "extremely" easy to make, such as the Snowy Mountains dish and the vintage Children's Birthday Dish. So, enjoy trying these traditional Belgian dessert recipes. You'll love tasting the results.