These Renaissance marmalet recipes make a colorful fruit conserve that tastes very similar to today's marmalade, but much smoother and much thicker and more like a candy in appearance. Most importantly, this sweetmeat is delicious! 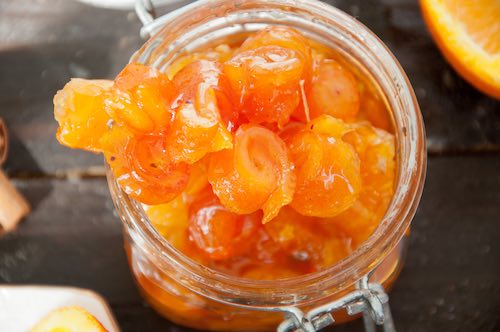 Marmalet was originally made of apples, but later, cherries and apricots were used. Oranges and lemons, however, were not used for marmalades until the latter part of the sixteenth century as they were unavailable. These historic Renaissance marmalet recipes are definitely worth trying.

Take Oranges, pare them thin as you can, boil them in four ſeveral waters; let them be very ſoft before you take them out, then take two quarts of Spring-water, put thereto twenty Pippins pared, quartered and coared, let them boil till all the vertue be out; take heed they do not loſe the colour; then ſtrain them, put to every pint of water a pound of Sugar, boil it almoſt to a Candy height, then take out all the meat out of the Oranges, ſlice the peel in long ſlits as thin as you can, then put in your peel with the juyce of two Lemons, and one half Orange, then boil it to a Candy.

To make Marmalet of any tender Plum 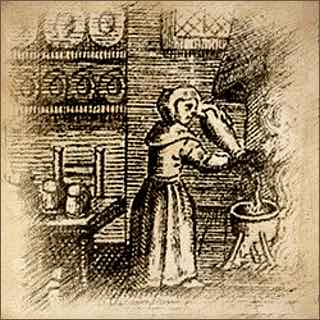 Take your Plums, and boil them between two diſhes on a Chafing-diſh of coals, then ſtrain it, and take as much Sugar as the Pulp do weigh, and put to it as much Roſe-water, and fair water as will melt it, that is, half a pint of water to a pound of Sugar, and ſo boil it to a Candy height, then put the pulp into hot Sugar, with the pap of a roaſted apple.

In like manner you muſt put roaſted Apples to make Paſte Royal of it, or elſe it will be tough in the drying. 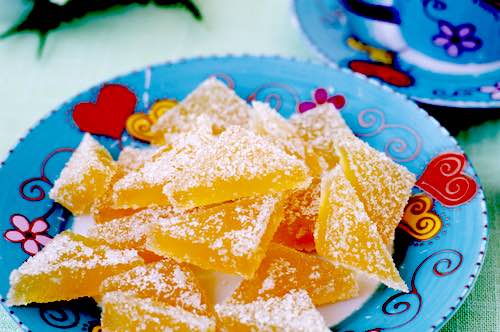 To make Marmalade of Apricocks

Take Apricocks, pare them and cut them in quarters, and to every pound of Apricocks put a pound of fine Sugar, then put your Apricocks into a Skillet with half of the Sugar, and let them boil very tender and gently, and bruiſe them with the back of a Spoon, till they be like Pap, then take the other part of the Sugar, and boil it to a Candy height, then put your Apricocks into that Sugar, and keep it ſtirring over the fire, till all the Sugar be melted, but do not let it boil, then take it from the fire, and ſtir it till it be almoſt cold; then put it in Glaſſes, and let it have the Air of the fire to dry it.

A pretty Sweet-meat with Roſes and Almonds

Make absolutely sure the rose petals you use in the Renaissance marmalet recipe are 100% organically grown without the use of pesticides or chemical fertilizers.

Take half a Pound of Blanched Almonds beaten very fine with a little Roſewater, two Ounces of the Leaves of Damask Roſes beaten fine, then take half a pound of Sugar, and a little more, wet it with water, and boil it to a Candy height, then put in your Almonds and Roſes, and a grain of Musk or Ambergreece, and let them boil a little while together, and then put it into Glaſſes, and it will be a fine ſort of Marmalade.

How to Shape and Store Marmalet

Marmalet was stored in airtight jars or boxes and often cut into lozenge-sized pieces, or a variety of fancy shapes for serving at a medieval-style dinner.

Popular Elizabethan confectionery shapes for marmalet were diamonds, spades, clubs, and hearts. Made with all-natural fruit flavors and colors, this forerunner to today's marmalade is a very decorative treat both for the table and for gift giving.