Renaissance marchpane recipes were once highly prized by royal chefs. Marchpane was a much-coveted sweetmeat consisting of almond paste sweetened generously with sugar. It's very similar to today's marzipan confection.

It was sometimes made into an elaborate confection by being molded into three-dimensional shapes, and hand-colored to resemble fruits, walnuts, and even slices of bacon.

Use these authentic 17th century Renaissance marchpane recipes to duplicate a delicious confection once reserved for the nobility.

Nothing will impress your noble guests more than to crown the meal with an authentic marchpane decorated with an edible gold leaf. Enjoy tasting the undisputed queen of sweetmeats. 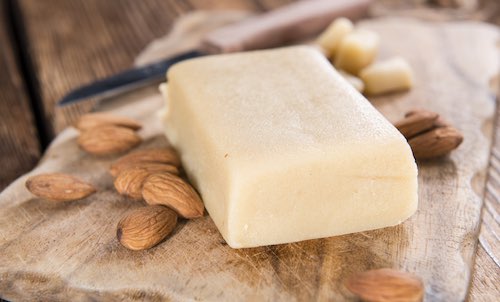 Raw Marzipan Ready for Rolling Into a Round Marchpane
(Source: ©HandmadePicture/Depositphotos.com)

It is generally believed that the book's author, known only as W.M., was a prominent manservant in the household of Queen Henrietta Maria and might once have been the queen's personal chef.

If you are in a hurry and wish to save time when making these Renaissance marchpane recipes, you can simply use the prepared marzipan or almond paste that's available at most food stores.

Take Almonds, and blanch them out of ſeething water, and beat them till they come to a fine Paſte in a ſtone Mortar, then take fine ſearſed Sugar, and ſo beat it all together till it come to a perfect paſte, putting in now and then a ſpoonfull of Roſe-water, to keep it from Oyling; then cover your Marchpane with a ſheet of paper as big as a Charger, then cut it round by that Charger, and ſet an edge about it as about a Tart, then bottom it with Wafers, then bake it in an Oven, or in a baking-pan, and when it is hard and dry, take it out of the Oven, and Ice it with Roſewater and Sugar, and the white of an Egg, being as thick as Butter, and ſpread it over thin with two or three feathers, and then put it into the Oven again and when you ſee it riſe high and white, take it out again and garniſh it with ſome pretty conceit, and ſtick ſome long Comfits upright in it, ſo gild it, then ſtrow Biskets and Carawayes on it. If your Marchpane be oyly in beating, then put to it as much roſe-water as will make it almoſt as thin as to ice.

Take ſome of your Marchpane Paſte, and work it in red Saunders till it be red; then rowl a broad ſheet of white Paſte, and the ſheet of red Paſte, three of the white, and four of the red, and ſo one upon another in mingled ſorts, every red between, then cut it overthwart, till it look like Collops of Bacon, then dry it.

Marchpane was traditionally baked on an under-crust of wafers — "then bottom it with Wafers" — that are similar to thin, crispy waffles.

This early wafer recipe will make wafers suitable for the Renaissance marchpane recipe. Simply sweeten them to your preferred taste.

Take a quart of Flower heaped and put to it the yolks of four Eggs, and two or three ſpoonfuls of Roſewater, mingle this well together, then make it like Batter with Cream and a little Sugar, and bake it on Irons very thin poured on. 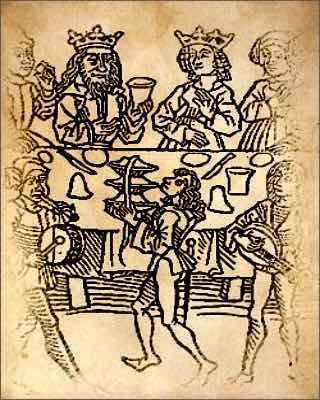 Royal banquets during the reign of Queen Elizabeth I (1533–1603) often featured large and elaborate assortments of savory sweetmeats, such as edible, rose-flavored plates and bowls molded of fine sugar candy.

But, the indisputable pièce de résistance at any Elizabethan banquet was undoubtedly the Marchpane.

Huge flat discs of baked marzipan with raised, pinched, crown-like rims round the edges were generously iced with sugar and lavishly decorated with molded comfits — sugar candy or marzipan treats molded as calligraphic letters, Celtic knots, coats of arms, and royal escutcheons — then extravagantly gilded with the finest gold leaf.

It was widely known that Elizabeth had a powerful addiction to sugar, which is likely what contributed to her generally bad health. It's on record that she especially loved to eat marchpane daily.

Royal marchpane was one of the queen's favorite sweetmeats, and its formal presentation at royal banquets always drew admiring gasps of delight from her noble guests.

Thanks to these authentic Renaissance marchpane recipes, you get to enjoy this marzipan treat once reserved for royalty.