Bake this spectacular French celebration cake for your next party and impress your guests. It's like no other cake! 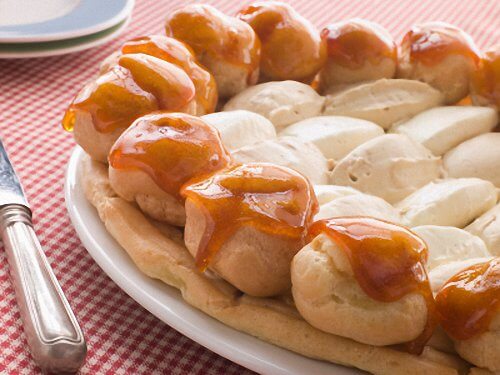 Puff paste is needed for a classic Gateau St Honore recipe. An old fashioned Soyer's puff paste recipe is available elsewhere on this site should you want your cake to be 100% homemade and historically accurate.

Otherwise, any commercial puff paste can be used in a pinch for this cake with excellent results.

Make a paste the same as for eclairs:

Put one cupful of boiling water and half a cupful of butter in a large saucepan, and when it boils up, turn in one pint of flour. Beat well with the vegetable masher. When perfectly smooth, and velvety to the touch, remove from the fire.

Break five eggs into a bowl. When the paste is nearly cold, beat the eggs into it with the hand thoroughly. Only a small part of the eggs should be added at a time.

Butter three pie plates. Roll puff or chopped paste very thin, and cover the three plates with it. Cut off the puff paste about an inch from the edge all round the plates. Spread a thin layer of the cooked eclair paste over the puff paste.

Put a tube, measuring about half an inch in diameter, in a pastry bag. Turn the remainder of the eclair paste into the bag and press it through the tube onto the edges of the plates, where the puff paste has been cut off.

Care must be taken to have the border of equal thickness all round the plates. With a fork, prick holes in the puff paste in the center of the plate. Bake half an hour in a moderate oven (375°F).

When the plates have been put in the oven, make what paste is left in the bag into balls about half the size of an American walnut. There will be enough for three dozen. Drop them into a pan that has been buttered lightly, and bake fifteen or twenty minutes.

When the little balls and the paste in the plate is done, take the balls on the point of a skewer or large needle, dip them in the syrup and place them on the border of paste (the syrup will hold them), about two inches apart.

A word of caution just here: Do not stir the syrup, as that will make it grain, and, of course, spoil it. A good plan is to pour part of the syrup into a small cup, which place in hot water. That remaining in the saucepan should be kept hot, but it should not boil, until needed.

When all the balls have been used, dip four dozen French candied cherries in the syrup, and stick them between the balls. Reserve about fifteen cherries, with which to garnish the centers of the cakes.

Place the pan of whipped cream in another of ice water, and sprinkle over it two-thirds of a cupful of sugar and nearly a teaspoonful of vanilla flavor. Strain the gelatin on this, and stir gently from the bottom until it begins to thicken.

When the whipped cream mixture will just pour, fill the three plates with it, and set them in the ice chest for half an hour. Garnish the top with the remaining cherries, and serve.

About the Gateau St Honore Recipe 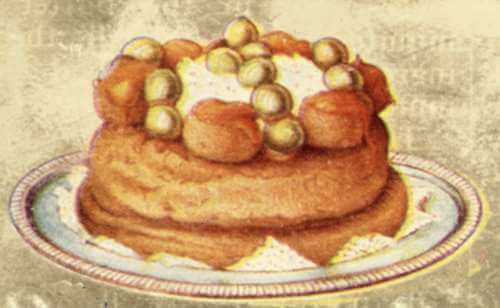 It's also known as the Ball Cake because of the little caramel covered pastry balls surrounding the top of the cake to form a crown-like decoration.

Despite its somewhat lengthy preparation time, you'll find it's still a straightforward cake to make, and the spectacular results are worth the extra time and effort needed. Simply follow the traditional recipe step by step, and it should turn out okay.

The authentic Gateau St Honore recipe above was first published in 1882, less than 40 years after its invention, so you can be sure it's faithful to the original.

The Gateau with its rich flaky texture and filling is unlike some modern-day versions that are made from modified recipes for the sake of convenience.

This is the real Gateau! 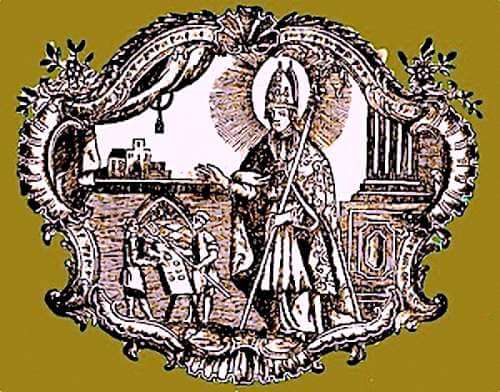 The ornately decorated Gateau Saint Honore cake is named for Saint Honoratus, the seventh-century Bishop of Amiens, and the French patron saint of pastry chefs and bakers.

It's a truly spectacular dessert cake to serve on very special occasions, and it makes a memorable birthday cake as its appearance is really quite festive. So be sure to try the traditional Gateau St Honore recipe.