These traditional French apple dessert recipes are surprisingly simple and straightforward to make, yet the baked apple dishes taste so delicious your guests will think you spent the entire afternoon preparing them. Ils sont délicieux! 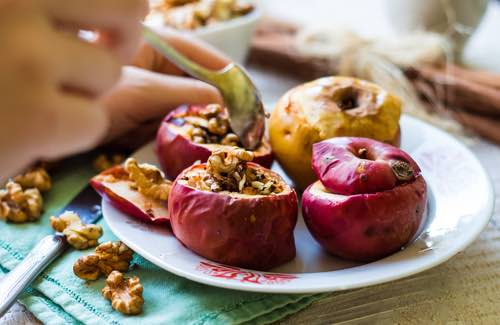 The following desserts were created by Chef Francois Tanty, royal chef of Napoleon III and the Czar of Russia, so you know they taste really good!

(1) Pare and core 8 nice apples, and dispose them on a buttered dish.

(2) Sprinkle sugar over them and let them bake in an oven until soft.

(3) Prepare a hot syrup with some marmalade of apricot and water, and pour over the apples. Proportions for five persons.

Use this delicious Apricot Sauce with Pommes au Beurre and other French apple dessert recipes.

(1) Place in a saucepan 12 apricots cut in pieces with 1/2 pound sugar, and cook till soft.

Sprinkle over some granulated sugar and serve on a folded napkin. For five persons.

As for Pomme Frittes, but cut the peaches in 2 or 4, according to the size and don't peel them.

As for Pomme Frittes, but cut the pineapples in slices 1/4-inch thick. 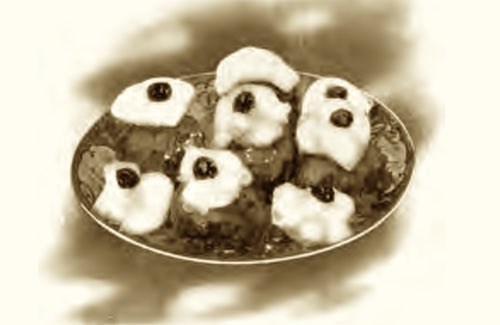 Traditional Compote of Apples (Cherbourg, France)
(PD Source: With a Saucepan Over the Sea, 1902)

Pare and core and cut into halves 6 large, fine apples. To each pound add 1 pound sugar, rind of 2 lemons, and a little ginger.

Serve with whipped cream, and garnish of cherries, citron, or Angelica.