This classic chocolate eclair recipe comes from America's most famous cooking school of the nineteenth century: The School of Cooking in Boston. It does require a little preparation time, but it's an easy recipe to make, and the old fashioned eclairs taste absolutely delicious.

I don't recall Mom making these chocolaty eclairs too often because they can be a wee bit finicky to fill, but when she did make them, they were a surefire hit with everyone! 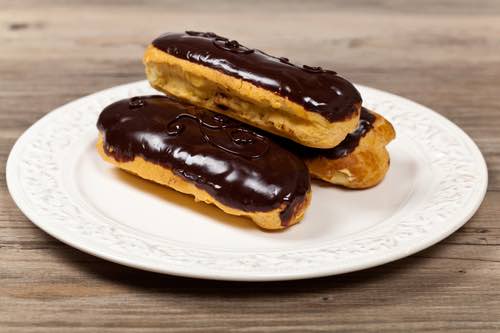 You Will Love Making These Homemade Chocolate Eclairs
(Source: ©alisafarov/Depositphotos.com)

Don't you love biting into a freshly made eclair? Just thinking about it, I can almost taste the soft pastry shell with its creamy filling and rich chocolate frosting.

Enjoy learning how to make delicious eclairs from scratch that will turn out just like Mom's when you use the same classic chocolate eclair recipe that she used.

How to Make Chocolate Eclairs from Scratch

Put one cupful of boiling water and half a cupful of butter in a large saucepan, and when it boils up, turn in one pint of flour. Beat well with the vegetable masher. When perfectly smooth, and velvety to the touch, remove from the fire.

Break five eggs into a bowl. When the paste is nearly cold, beat the eggs into it with the hand. Only a small part of the eggs should be added at a time.

When the mixture is thoroughly beaten (it will take about twenty minutes by hand), spread on buttered sheets in oblong pieces about four inches long and one and a half inches wide. These must be about two inches apart.

Bake in a rather quick oven (425°F) for about twenty-five minutes. As soon as they are done, ice with chocolate frosting (recipe below). When the icing is cold, you will cut the eclairs on one side and add the filling.

Mom used this same chocolate frosting on her homemade brownies too. It dries nicely and tastes chocolatey delicious.

Stir over the fire until smooth and glossy. Dip the tops of the eclairs in this as they come from the oven.

When the chocolate icing is dry, cut open eclair and fill with the cream (recipe below), which should be cold.

If a chocolate flavor is liked with the cream filling, one tablespoonful of the dissolved chocolate may be added to it.

Stir the mixture into the boiling milk. Cook fifteen minutes, stirring often. When cold, flavor with one teaspoonful of vanilla extract. 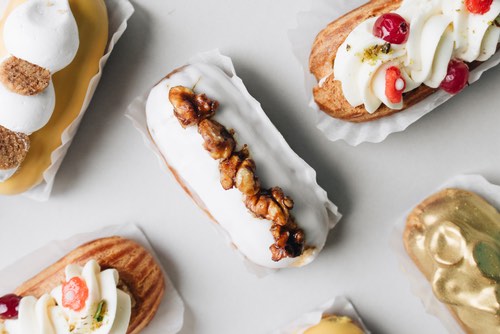 Ideas for Serving a Variety of Frosted Eclairs
(Source: ©anna_georgievna/Depositphotos.com)

Eclairs are also delicious when topped with a white vanilla frosting or other kinds of frostings, and garnished with walnuts, or fresh berries in season. 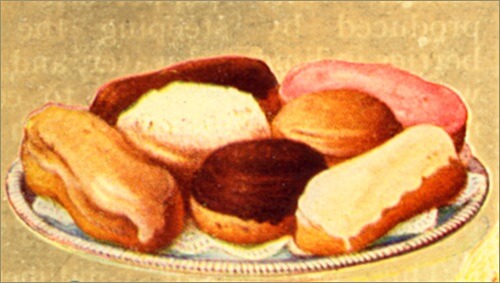 Use Grandma's Frosting Recipes to create a variety of decorated eclairs. The colorful toppings will serve to enhance any dessert table. And thanks to Grandma's classic chocolate eclair recipe, you can make a plateful of delicious treats today.