These old fashioned cruller recipes are not to be confused with the common soft French cruller. These crullers are cake-like, sweet, and wonderfully crisp on the outside.

Form your crullers the old fashioned way by cutting and separating the little strips of dough or simply twist the dough before frying to make them like the ones that Aunt Em served to Dorothy and the farmhands in the Wizard of Oz movie. 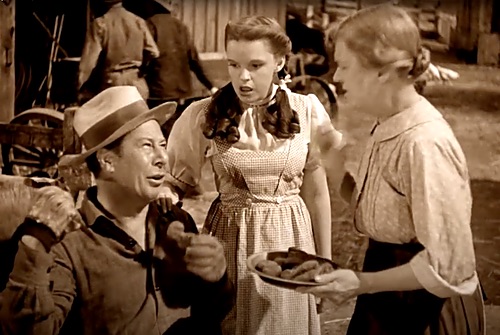 Take up pieces by running finger in and out of gashes, lower into deep hot fat and fry. Take up on a skewer, drain on brown paper, and roll in powdered sugar, if desired.

Beat eggs, sugar and butter together, add milk, spice, and flour; put another cup flour on molding-board, turn the dough out on it, and knead until stiff enough to roll out to a quarter inch thick.

Cut in squares, make three or four long incisions in each square, lift by taking alternate strips between the finger and thumb, drop into hot lard, and cook like doughnuts. —Miss R. J. S.

Six eggs, one coffee-cup sugar, six tablespoons melted butter, four of sweet milk, one teaspoon soda in milk, two teaspoons cream of tartar in the flour, one teaspoon ginger, half a small nutmeg (or any other seasoning), flour to roll out; fry in hot lard. —Miss M. B. Fullington

Beat the eggs, add cream and milk. Sift dry ingredients and combine with liquid, using just enough flour to make dough that can be rolled, but still remain soft. Mix well and let stand for 2 hours.

Turn dough out on floured board and roll to 1/4-inch thick. Cut into strips 6 inches by 1 inch. Fry in deep fat (360°F) until brown on both sides. Drain on absorbent paper and dust with powdered sugar, if desired.

Cream together the butter and sugar. Add the eggs beating well. Sift in the cinnamon and enough flour to make a stiff dough. Roll out dough very thin on a floured board to about 1/8-inch thickness. Cut into rectangular pieces 3 inches by 5 inches.

Carefully make 5 cuts lengthwise in the dough 1/2 inch apart and 4-1/2 inches long, so that the rectangle remains in one piece.

Fry in hot deep fat (360°F) for 2 minutes or until they bob up to the top of the hot fat. When dropping them into the fryer, pick up the 1st, 3rd, and 5th strips and pull them upward. Let the 2nd, 4th, and 6th strips sag downward so that in frying they get all tangled or as the Pennsylvania Dutch say, all through each other.

Remove from fryer and dust with powdered sugar or dribble molasses over them and eat them while hot.

Fry in deep fat hot enough to brown the dough but not to burn it. Drain on paper. Sprinkle with powdered sugar. —Mrs. W. A. Bellingrath

Roll out in thin sheets, cut in pieces about two by four inches; make as many cuts across the short way as possible, inserting the knife near one edge and ending the cut just before reaching the other.

Pass two knitting needles under every other strip, spread the needles as far apart as possible, and with them hold the trifles in the fat until a light brown. Only one can be fried at a time. —Miss Ettie Dalbey, Harrisburg

Fried trifles are a forgotten homemade pastry treat that was once relished by many dessert lovers. As easy to make as an old fashioned cruller recipe, the jelly trifles are super delicious!

Work one egg and a tablespoonful of sugar to as much flour as will make a stiff paste; roll it as thin as a dollar piece and cut it into small round or square cakes; drop two or three at a time into the boiling lard.

When they rise to the surface and turn over they are done; take them out with a skimmer and lay them on an inverted sieve to drain. When served for dessert or supper put a spoonful of jelly on each. So good!

Watch the above YouTube video with the opening scene of the 1939 Wizard of Oz movie. Nearing its end, you will see Aunt Em serving a plateful of her homemade crullers to Dorothy and the farmhands. Now, thanks to the old fashioned cruller recipes, you can enjoy them too!