Grandma's old fashioned cream puffs recipes will come in handy when you want to serve something light and sweet for dessert. Everybody loves these homemade pastries with the delicious cream fillings. 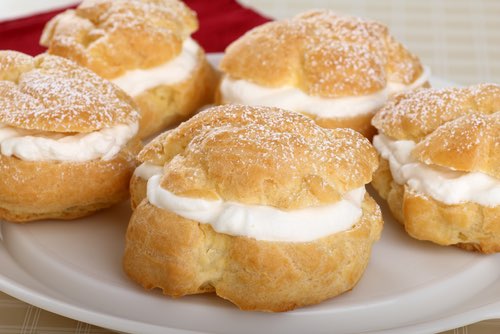 Put the water in a saucepan to boil. When boiling, add butter and stir in the flour. Let cool. When cold, add the eggs well beaten. Beat all thoroughly and drop on to buttered tins.

Bake 20 minutes in a quick oven. When cool, slit with a sharp knife.

These puffs may be filled with the following custard filling, but the whipped cream is much better.

If liked, one may brush the tops with a little beaten egg and milk before putting in oven.

When cold, open and fill with whipped cream or custard filling, and dust tops with fine sugar.

Put hot water, salt, and butter into a large saucepan, and when boiling work in the flour until smooth. Let cool, and beat in one at a time 5 eggs.

Spread into finger forms on tins, and bake a few minutes in a quick oven (425°F) until light as a feather. Watch carefully and don't over bake.

Let cool, and cut open tops with a sharp knife so as to fill with sweetened whipped cream and strawberries. 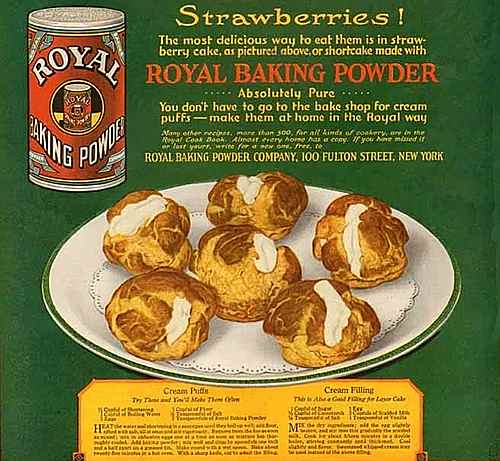 Heat the water and shortening in saucepan until they boil up well; add flour, sifted with salt, all at once and stir vigorously. Remove from the fire as soon as mixed; mix in unbeaten eggs one at a time as soon as mixture has thoroughly cooled.

Add baking powder; mix well and drop by spoonfuls one inch and a half apart on a greased tin. Make round with a wet spoon.

Bake about 25 minutes in a hot 475°F oven. With a sharp knife, cut near base to admit the filling.

This is also a good vanilla cream filling to use when making homemade layer cakes.

Mix the dry ingredients; add the egg slightly beaten and stir into this gradually the scalded milk. Cook for about fifteen minutes in double boiler, stirring constantly until thickened. Cool slightly and flavor.

Sweetened whipped cream may be used instead of this cream filling, if desired.