The unbeatable taste of Old Italy is present in these creamy flavorful puddings, and they're easy to make too. Simply follow the directions. 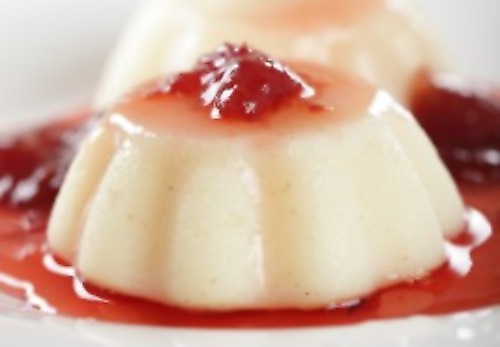 Boil one and a half pints of milk with four ounces of castor sugar, and gradually add five ounces of semolina, boil for a quarter of an hour more and stir continually with a wooden spoon, then take the saucepan off the fire, and when it is cooled a little, add the yolks of six and the whites of two eggs well beaten up, a little grated lemon peel, three-quarters of an ounce of sultanas, and two small glasses of rum.

Mix well, so as to get it very smooth, pour it into a buttered mold and serve either hot or cold. If cold, put whipped cream flavored with stick vanilla round the dish; if hot, serve with a homemade Zabaglione.

Boil two dessertspoonfuls of rice and one of sugar in milk. When sufficiently boiled, drain the rice and let it get cold. In the meantime place a mold on ice, and decorate it with slices of preserved fruit, and fix them to the mold with just enough nearly cold dissolved isinglass (plain gelatin) to keep them in place.

Also put half a pint of blancmange (a sweet opaque gelatinous dessert made with cornstarch and milk) on the ice, and stir it till it is the right consistency, gradually add the boiled rice, half a glass of Maraschino, some bits of pineapple cut in dice, and last of all half a pint of whipped cream.

Fill the mold with this, and when it is sufficiently cold, turn it out and serve with a garnish of glace fruits or a few brandy cherries. 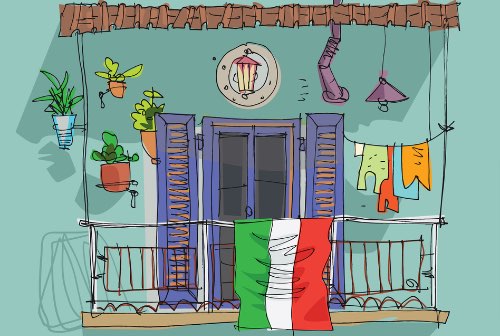 Mrs. Gentile was always noted for promoting only the finest desserts, and this traditional Italian budino recipe for old fashioned budino di pane is no exception.

Soft bread crumb, five ounces; butter, three and a half ounces; four eggs; one cup sugar; taste of lemon peel; a pinch of salt. Cut the bread crumb into pieces and soak in cold milk. Then rub through a sieve.

Melt the butter in a double boiler (or in a vessel immersed in boiling water) and mix with the eggs until butter and eggs are incorporated to each other. Add the bread crumb and the sugar and mix well.

Pour the mixture in a mold greased with butter and sprinkled with bread crumb ground fine and bake like other puddings.

To begin this traditional Italian budino recipe, shell half a pound of hazelnuts in warm water and dry them well at the sun or on the fire, then grind them very fine, together with sugar, of a weight somewhat less than the nuts.

Put one quart of milk on the fire, and when it begins to boil, put two-thirds pound of lady fingers or macaroons crumbled and let it boil for five minutes, adding a small piece of butter.

Rub everything though a sieve and put back on the fire with the nuts to dissolve the sugar. Let it cool and add six eggs, first the yolks, then the whites beaten.

Pour into a mold greased with butter and sprinkled with bread crumbs ground fine. The mold must not be all full. Bake in the oven and serve cold. This will be sufficient for eight or ten persons.

Milk, one quart; rice meal, seven ounces; sugar, four and a half ounces; six eggs, a pinch of salt, taste of vanilla.

When the meal is cooked add the sugar, the butter, and the salt. Remove from the fire and when it is lukewarm, mix the eggs (beaten) and the taste of vanilla. Then bake the pudding like all the other Italian budino recipes and serve warm.

Boil or steam the potatoes, skin and rub through a sieve. Place them again on the fire with the butter, the flour, and the milk, all poured little by little, stirring well with the ladle; then add the sugar, the salt, and the cinnamon, or lemon peel (just a taste) and mix everything together well.

Remove from the fire and, when the mixture is lukewarm or cold, add the eggs, first the yolks, then the whites beaten. Bake like the other Italian budino recipes and serve hot.

One big lemon; sugar, six ounces; sweet almonds with 3 bitter ones, six ounces; six eggs. Cook the lemon in water, for which two hours will be enough. Remove dry and rub through a sieve. Before rubbing, however, taste it, because if it has a bitter taste it must be kept in cold water until it has lost that unpleasant taste.

Add the sugar, the almonds skinned and ground very fine, and the six yolks of the eggs. Beat the whites of the eggs and add them to the mixture that will then be put in a mold and baked like the other old fashioned Italian budino recipes.

First prepare the almonds, that is to say skin them in warm water and toast them on the fire over a plate of iron or a stone, then grind very fine. Boil the sugar and the lady fingers, broken in little pieces in the milk, mixing well.

After half an hour of boiling, keeping always stirred, rub the mixture through a sieve. Then add the toasted and ground almonds.

When it is cold add the beaten eggs, pour it in a smooth mold, whose bottom will be covered with a film of liquified sugar and cook in a double boiler, that is to say put the mold well closed in a kettle full of boiling water.

When cooked let it cool and place in icebox before serving.

Cut the peaches in two parts, remove the stones, and enlarge somewhat the cavity where they were with the point of a knife.

Mix the peach pulp that you extract with the almonds, already skinned, and grind the pulp and the almonds very fine together with two ounces of the sugar. To this mixture add the lady fingers crumbed, and the candied fruits cut in very small cubes.

This will be the stuffing with which you will fill the cavities of the twelve halves of peach. These you will place in a row in a baking tin, with the stuffing above. Add the remaining ounce of sugar and bake in oven with a moderate fire.

Separate the yolks of the eggs, add 1 tablespoonful of castor sugar, the ground almonds, and the cream gradually. Whisk the whites stiffly, stir them lightly in, and add more sugar, if necessary.

Have ready a mold well buttered and lightly covered with shredded almonds and candied peel, then pour in the mixture. Steam gently for 1-1/2 hours, and serve with a suitable sauce.

About the Italian Budino Recipe 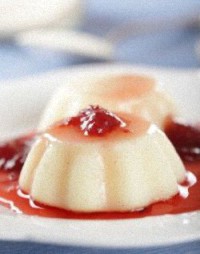 Budino is Italian for pudding that's creamy and rich and often made in a decorative mold. These traditional Italian budino recipes call for all-natural ingredients such as eggs, fresh lemons, ground hazelnuts, and roasted almonds.

Enjoy making a variety of healthy desserts that are so good tasting. There's even an old time potato pudding — Budino di patate tastes absolutely delicious, and your friends won't believe it's made with potatoes.

They are all yummy and can be served on any occasion. Your family will love the delicious taste of homemade puddings that hail from Old Italy.