These frozen dessert recipes were invented by ice cream parlor operators to WOW their customers and keep them coming back for more.

Imagine making your own fancy ice cream sundaes that look too good to eat and taste even better. Be prepared to WOW your family and friends! 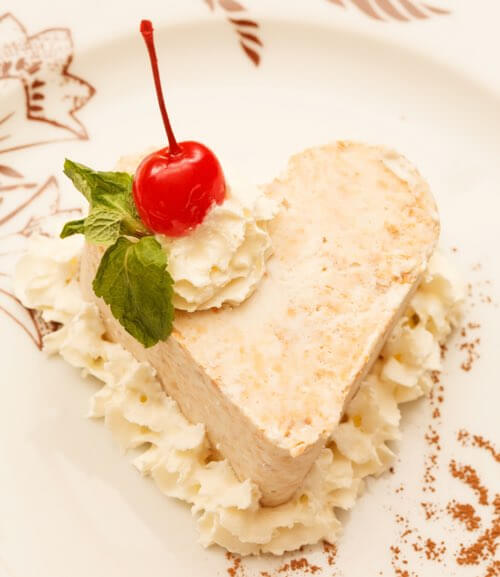 Trim the molded ice cream even with the top of the mold, then place the cream on a china plate of fancy design, measuring about 6 inches in diameter.

Pour over the cream a ladleful of crushed strawberries, add a spoonful of mixed ground nuts and top off with a spoonful of whipped cream, a cherry, and a sprinkle of ground cinnamon.

The author states that this sundae is a good seller at 20 cents. He has promoted it in the daily papers of his town with much success. —Philip W. Fraker

For this classy frozen dessert recipe, line a champagne sundae glass with four or five split lady fingers in upright position, and then put into the center a large scoopful of Neapolitan ice cream.

Over all pour a ladleful of marshmallow sauce, or cover with whipped cream and close to the top insert peaches, the slices pointed toward a cherry placed in the center. Price 15 or 20 cents. —Jos. B. Clark

In dispensing the Northern Lights use a fine china plate, six inches in diameter, decorated with a winter design (e.g., ice and snow).

First, place a piece of angel food cake on the plate. Around the angel food lay three slices of orange, on the first of which place a red cherry, on the second a white cherry, and on the third a blue cherry.

Now place a (large size) scoop of ice cream on the cake and insert in the top of the ice cream a Veronique wafer, leaving about one inch to appear above the cream (this is to represent the North Pole). Stick a small national flag on the top of the pole.

Place three spoonfuls of pineapple ice around the bottom of the cream between the slices of orange. Then, spread whipped cream over the top of the mold of ice cream just below the pole, so that it looks like snow.

Lastly, arrange four chocolate "Teddy Bears" around in the whipped cream so that they appear to be trying to reach the pole — one at the very top. (Sells for 20 cents.)

For this frozen dessert recipe, place a scoop of chocolate brick ice cream on a fancy Melba plate and on it lay a slice of devil's food cake.

Over all pour a float of chocolate syrup and top with a maraschino cherry. "A very delicious and dainty dish when correctly served." (Sells for 15 cents.)

In dispensing "Haystack" use a fine china plate of rose design decoration and measuring six inches in diameter. For the base of the stack use a piece of chocolate cake about 2-1/2 inches square; on this place a scoop (large size) of vanilla ice cream.

Pour over the cream a heavy caramel syrup, sifting over it shredded coconut which has been previously browned.

Around the base of the stack arrange four maraschino cherries, put a little whipped cream on the slices of orange, and insert a spoon in the side of the stack. Price, 25 cents. —Philip W. Fraker

Into a glass about 4 inches deep place a small amount of chocolate, vanilla, or strawberry ice cream; split two lady fingers and stand the four halves on end in a vertical position, so that the upper ends will reach to the top of the glass.

Add about 1/2 ounce of chocolate syrup, or syrup of any flavor desired, one scoopful of vanilla ice cream, some whipped cream, one teaspoonful of English walnuts, and top it off with a slice of fig or a maraschino cherry. In pricing this feature, be sure to cover the costs. —J. E. Stallings

For this frozen dessert recipe, cut an eclair shell in two lengthwise, place one half on a banana split dish and fill with "Delight" ice cream (see below).

Place top on the shell and cover with a ladle of marshmallow topping. Dust over all a sweet powdered chocolate and top with a couple of red maraschino cherries.

This frozen dessert recipe makes slightly over one gallon of fancy ice cream for scooping later.

For this recipe, take one gallon of vanilla ice cream, slice into it 10 ripe bananas, then add 6 ounces of maple syrup, 1 pound of chopped pecan nut meats, add 1/2 pound of seeded Muscat grapes which have been previously soaked in simple syrup for three hours.

Mix all well together, place in a storage container, and keep frozen till used. —Harry G. Frame

See instructions for making paper cases further down this page.

Secure dainty white paper cases of a square shape; half-fill a case with ice cream and then introduce a spoonful of guava jelly, or a layer of chopped nutmeats and figs (or dates).

Fill the case even-full of ice cream. Mound the top with whipped cream and garnish with four blanched almond meats arranged like the petals of a flour and with a bit of candied citron for a center.

Lay on one side of the plate a spray of crystallized mint, or appropriate garnish, also a square piece of delicate white cake frosted with white and decorated with a slight touch of pale green frosting. This mixture is worth 25 cents. 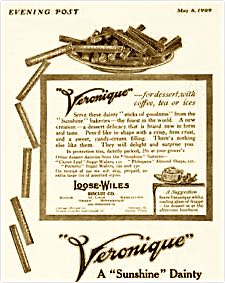 The vintage Veronique promotional illustration appeared in the May 1909 edition of the Evening Post magazine.

This frozen dessert recipe easily makes a pie that's absolutely delicious with its crushed pineapple and ice cream filling, Its baked meringue topping reminds of Baked Alaska, except it's a pie.

Make a pastry shell and bake, then allow it to cool. Thoroughly chill 1 cup of well-drained crushed pineapple.

Make a meringue of 4 egg whites beaten stiff and dry, adding 2 tablespoons sugar for each white.

Set pie in the oven at 350°F just until the meringue is delicately browned, no longer. Serve at once.

For this Delmonico's Restaurant-style frozen dessert, make a custard of milk, sugar, eggs, and salt; cool, strain, and flavor (with lemon).

Whip cream; there should be two quarts; add to custard, and freeze. Serve plain or with Angel Food.

Whip a pint of rich cream until thick. Beat the yolks of four eggs with one-quarter pound of sugar, until very light.

Then add it to the cream, with a pony (ounce) of maraschino. Whip the whites of five eggs very hard, and add them to the mixture, mixing lightly.

Then fill fancy paper cases or small serving molds until about one inch higher that the edges, and set to freeze. When hard, and just before serving, dip the tops in grated chocolate.

Make a Souffle Glacé Pavlowa mixture (above), dress in fancy paper cases, using a pastry bag with a fancy tube. Sprinkle some chopped pistachio nuts on top, and freeze.

Ice cream and sherbet are often served in small forms or in fancy paper cases, one case serving for each guest.

Make and freeze the cream and fill the paper cases with two kinds, either sherbet and plain ice cream, or sherbet and tutti-frutti, or sherbet and a mousse, or any combination that will be agreeable in flavor and harmonize in color.

Pack the cases in a freezer, with a layer of waxed paper between each layer of cases. Keep frozen till ready to serve.

Serve on a lace-paper napkin laid on a fancy plate. Sometimes the biscuits are covered with a méringue and browned slightly just before serving.

Mix together in a deep bowl or pail one pint of "rich" cream, one-third of a cupful of sugar and one teaspoonful of vanilla extract.

Put the mixture in a pan of ice water and whip to a stiff froth. Stir this down, and whip again. Skim the froth into a deep dish.

When all the cream has been whipped to a froth, fill paper cases with it, and place these in a freezer. Let these remain there two hours.

Make a pint of strawberry sherbet. Put a thin layer of it on each case of cream, and return to the freezer. Let the cases stand half an hour longer, and serve.

The cases should be arranged on a bright napkin, spread on a flat dish.

One pint of heavy cream, whipped to a froth; a dozen and a half macaroons, three eggs, half a cupful of water, two-thirds of a cupful of sugar, a teaspoonful of vanilla extract.

Boil the sugar and water together for half an hour. Beat the eggs well, and stir into the boiling syrup. Place the saucepan containing the mixture in another of boiling water, and beat for eight minutes.

Take from the fire, place the saucepan in a pan of cold water, and beat the mixture until it is cold; then add the vanilla flavor and whipped cream. Stir well, and fill paper cases.

Have the macaroons browned and rolled fine. Put a layer of the crumbs on the cream in the cases, and freeze.

Paper Cases for Use with Ice Cream

Follow the original instructions to make the fancy paper cases called for in some frozen dessert recipes from the late 1800s. 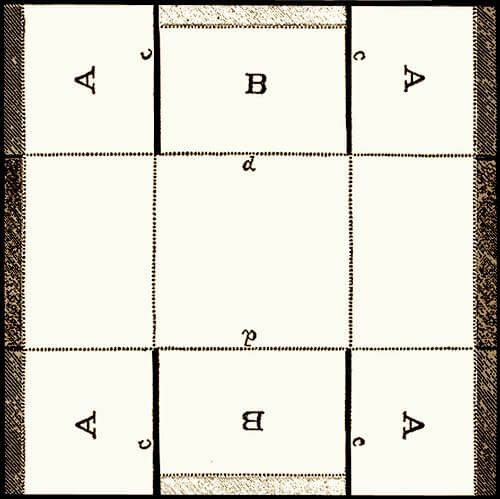 This is not difficult, if one will carefully study for a moment the Paper Box diagram above and the directions following:

Remember that it's simply a box that is to be made, and after the first two steps it may be easy to guess how to complete the work.

By tracing a copy of the diagram one obtains a good model a fraction of the size the case should be; that is, the square should be five inches on a side instead of the size illustrated.

After experimenting with this, the shape may be varied to suit the taste. Stiff white note paper should be used.

Cases can sometimes be bought from restaurateurs and pastry shops.

The paper cases are called for with frozen dessert recipes when making biscuit glacé, biscuit soufflé, and other frozen dainties. 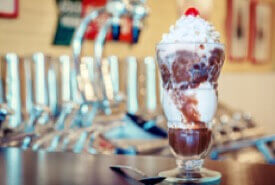 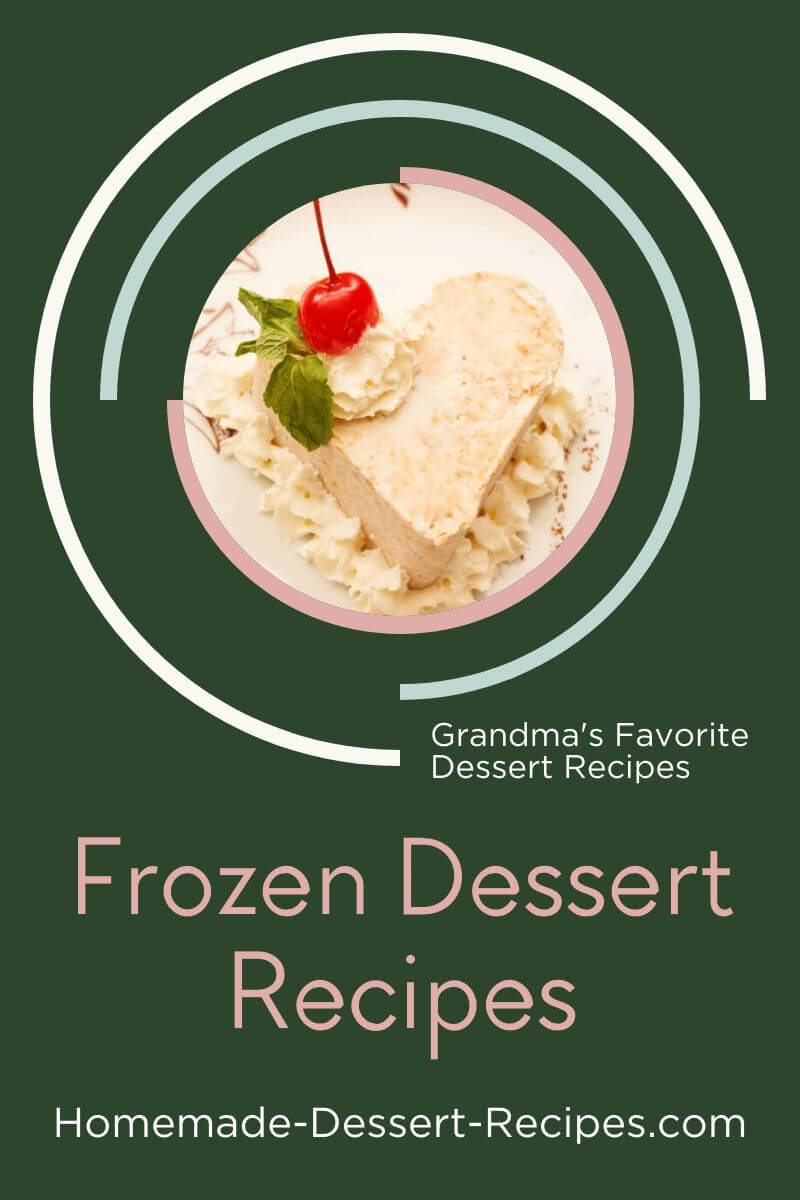