These old fashioned Divinity candy recipes are the first of their kind published. What's been called the world's most famous fudge-like candy had its origin in the Southern United States in the early 1900s.

Divinity is typically a white, sometimes a pastel tinted, meringue-like confection with a light, fluffy texture and a crisp outer layer. It likely got its name from its DIVINE taste. Really, it's that good. It tastes divinely delicious! 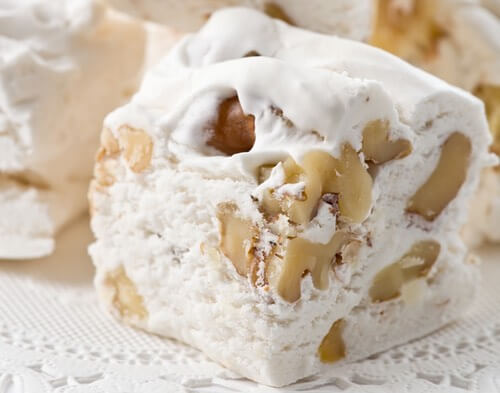 When it comes to an old fashioned Divinity candy recipe, this is perhaps the earliest recipe ever published.

Boil first three ingredients until quite brittle in cold water, then pour slowly and gradually into the eggs and beat until it stiffens. Add vanilla and nuts and pour onto a buttered platter. When cold cut in squares. 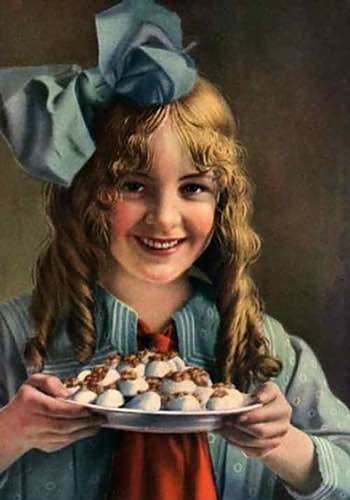 To the first mixture add the beaten whites of three eggs. Add this to second mixture, then add one cup chopped walnuts and one teaspoon vanilla. Beat until like fudge. —Celia McLennan

Boil sugar, syrup, and water to soft ball stage. Take out one cup and fold into stiffly beaten white of egg. Add vanilla and nuts.

Allow rest of syrup to reach crack stage and stir that into egg mixture. Put in pan or allow to cool until it will stand alone, then drop by spoonfuls on buttered paper.

Chocolate Divinity may be made by adding a square of Baker's chocolate grated to syrup before boiling. —Anna Wood Richie

Boil sugar, syrup, and water until it forms a soft ball in water. Add slowly one cup of this mixture to whites of eggs which have been beaten stiff, with a tiny bit of salt. Continue to cook remainder of syrup until it crackles in cold water.

Pour syrup over the egg mixture and beat until cold. Add nuts and flavoring. Pour into shallow pan. When cold cut in oblongs. —Geraldine Mitchell Thompson

From Various Sources With Permission

Continue to beat while pouring hot syrup in a thin stream into egg whites. Add vanilla; beat until mixture holds its shape and becomes slightly dull. (Mixture becomes very stiff.) Fold in nuts, if you choose.

Drop from buttered spoon onto waxed paper. Let stand at room temperature, turning candy over once, until surface of candy is firm — allow at least 12 hours. Store in airtight container. Makes about 4 dozen candies.

This old fashioned Divinity Candy recipe is easy to make with NO egg whites and NO thermometer. Powdered, dry frosting mix is difficult to find, but packages are available in some food stores.

Line a 10x15-inch cookie sheet with parchment or waxed paper. Set aside. Beat frosting mix, corn syrup, vanilla, and boiling water in a mixing bowl until stiff peaks form, about 5 minutes. Mixture will be very thick, and it is helpful to use a stand mixer.

Transfer mixture to a large bowl and gradually beat in sugar; stir in nuts. Drop mixture by teaspoonfuls onto lined pan.

Let stand about 4 hours or until firm. Turn candies over and dry at least 12 hours. Store in an airtight container. Makes about 5 dozen or so pieces.

In a large heavy saucepan, stir together the water and sugar. Bring to a boil, and heat to between 234°F and 240°F (112°C and 116°C), or until a small amount of syrup dropped into cold water forms a soft ball that flattens when removed from the water and placed on a flat surface.

Remove from the heat, and stir in the marshmallow creme, vanilla, food coloring, and pecans. Let the mixture sit for about 5 minutes until slightly cooled and thickened.

Drop by spoonfuls onto waxed paper. Chill until firm before storing in an airtight container. Makes about 2 dozen candies.

The Marshmallow Creme called for in the recipe is an easily spreadable marshmallow-based confection that originated as a tasty filling for layer cakes.

Commercial versions of the confection were first sold in the early 1900s, and today the product can be purchased throughout North America and in many European Union supermarkets.

TO MAKE YOUR OWN: Visit my Homemade Icing page for an easy recipe for Marshmallow Creme.

Here's a few practical tips to help you in getting perfect results with an old fashioned Divinity candy recipe:

Some experimentation can be expected if you are inexperienced in making Divinity, since misjudging its cooking time can greatly affect the results.

Some old fashioned Divinity candy recipes say to pour the cooked candy mixture on a buttered platter for cutting into squares. However, recipes published later on began to call for pouring or dropping the mixture by spoonfuls onto waxed paper for cooling.

So, Divinity squares or drops, it's your choice. Both are DIVINE!