These old fashioned popcorn balls recipes got plenty of use in our family. Dad would boil up some molasses or corn syrup while I popped the corn, and we would make some homemade treats to enjoy after the evening's farm chores were done. Now, you can enjoy them too. 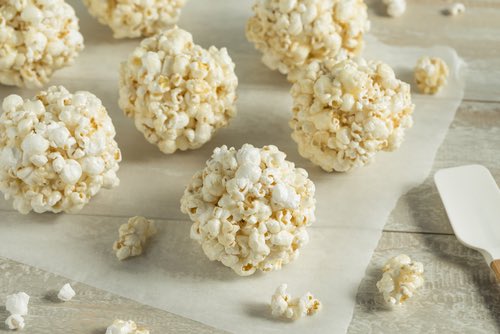 This is the same old time candy recipe that Dad and I used when I was a kid back in the 1950s, and it never fails to make delicious popcorn treats.

We snacked on the candied popcorn while listening to our favorite comedy shows on our old GE radio. We loved Abbott and Costello, and we'd laugh out loud at their crazy antics.

Sadly, the old time radio shows have all been eclipsed by television, but the old fashioned popcorn balls are as delicious as ever. Try them and see!

One method of making popcorn balls requires a pint of molasses or syrup (either corn syrup, sugar molasses, or maple syrup), two cups of sugar, two tablespoonfuls of butter, and a teaspoonful of vinegar.

Cook till the syrup will harden into a firm ball when a little is dropped in a cup of cold water.

Pour the hot syrup over four or five quarts of popcorn, stirring till each kernel is well coated, when it may be pressed with the hands into balls or molded into any form desired.

It's a good idea to remove all unpopped kernels first, as it's easier on the teeth. Enjoy.

While this isn't an old fashioned popcorn BALLS recipe as such, it makes a pleasant change, and it's so easy to prepare.

You'll love nibbling on popcorn coated with caramelized brown sugar. This has always been one of my favorite treats.

Put butter in saucepan, and when melted add sugar and water. Bring to boiling-point, and let boil sixteen minutes. Pour over popcorn, and stir until every kernel in the bowl is well coated with sugar. 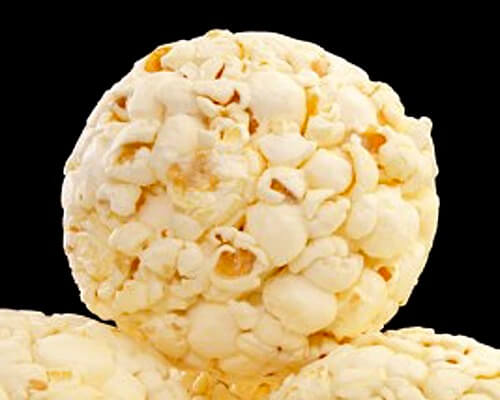 Take three large ears of popcorn (about one cupful of corn). After popping the corn, shake it down in pan so the unpopped corn will settle at the bottom; put the nice white popped corn in a greased pan.

For the candy, take one cup of molasses, one cup of white or light-brown sugar, one tablespoonful of vinegar. Boil until it will harden in water. Pour on the corn. Stir with a spoon until thoroughly mixed, then mold into balls with the hand.

No flavor should be added to this mixture, as the excellence of this commodity depends entirely upon the united flavor of the corn, salt, and the sugar, or molasses.

This old time popcorn candy recipe is similar those for making popcorn balls, except the candy mixture isn't allowed to boil to the hard ball stage. Hence, the candied popcorn remains loose and is not formed into balls.

Put into an iron kettle (or cooking pot) one tablespoonful of butter, three tablespoonfuls of water, and one cupful of white sugar; boil until ready to candy, then throw in three quarts nicely popped corn (first remove all unpopped kernels).

Stir vigorously until the sugar is evenly distributed over the corn; take the kettle from the fire and stir until it cools a little, and in this way you may have each kernel separate and all coated with the sugar.

Of course, it must have your undivided attention from the first, to prevent scorching!

Almonds, English walnuts, or, in fact, any nuts are delicious when prepared in this way.

For eight quarts of popped corn take one cup molasses and one-half cup sugar. Boil until it hardens in cold water, and then add one-fourth teaspoonful soda to improve color.

One cup of molasses, one cup of brown sugar, one tablespoon of vinegar, butter size of an egg. Boil all ingredients until brittle. Pour this over two quarts of popcorn and mold into balls.

For special occasions, you can add a few drops of red, green, or blue food coloring to the boiled candy mixture. Kids of all ages love colored popcorn balls! Wrap them in waxed paper to keep them fresh until serving.

Peanuts or chopped cashews when added to the syrup make a tasty change. Never be afraid to experiment with an old fashioned popcorn balls recipe. Even the failures often taste delicious.

Enjoy a LAUGH to brighten your day! Listen to Bud Abbott and Lou Costello's hilarious "Who's On First?" skit from the World War 2 Special Services Division V-Disk.