Grandma's old fashioned peanut brittle recipes make the most scrumptiously delicious chewy crunchy candy imaginable. If you love the taste of peanuts and toffee, then you will love eating this authentic peanut brittle.

If you've never tasted brittle, then you're in for a BIG treat. Of all the homemade candies, brittles are one of the easiest to make and among the most satisfyingly delicious. 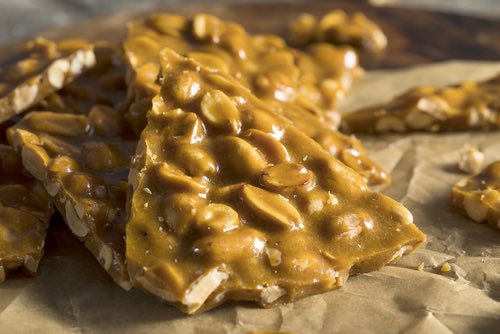 These old fashioned peanut brittle candy recipes were our family's favorites for making homemade candy when living on the farm back in the 1950s. Enjoy!

One cup brown sugar, 3/4 cup peanuts. Put shelled peanuts, chopped if desired, in a buttered pan to set in a warm place. Melt sugar, stirring constantly and with considerable pressure. I find an old-fashioned iron frying pan is best for this.

When the sugar is a golden-brown liquid stir in hot peanuts very quickly. Pour into greased pan and spread thin by tilting pan. When cold, break into desired-sized pieces.

Boil molasses, sugar, salt, and orange zest until it reaches a hard-crack stage (when a small amount of syrup dropped into cold water threads and breaks easily between your fingers).

Add butter and soda while stirring rapidly, plus as many halved peanuts as desired. Drop by spoonful onto buttered pan.

Grandma made this delicious brittle candy for her children when they lived on the Alberta prairie in the late 1890s. You'll love its rich, buttery taste.

1-1/2 cups molasses, 1 tablespoon sugar, 1 tablespoon vinegar. Boil until brittle when tried in water. Then add butter half size of an egg and 1 quart peanuts chopped quite fine. Spread in hot buttered pans. When cold, break up in small pieces.

Prepare the same as Peanut Brittle, only add the almond nuts in time to allow them to roast a little in the boiling sugar. 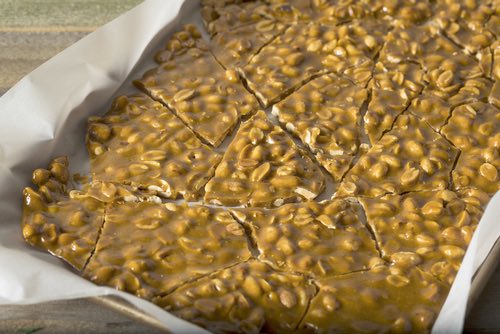 You will love the taste of peanut brittle, but when you come to think of it, why not try making it with almonds, macadamias, pecans, cashews, or pistachios too?

Simply choose one of Grandma's old fashioned peanut brittle recipes and indulge yourself by substituting your favorite nut.

Our neighbor Mr. Watkins made awesome peanut brittle, and I eagerly looked forward to sampling it. Though I was young at the time, I can recall loving it because he didn't skimp on the peanuts.

Ever since, when people ask me how to make peanut brittle, I always suggest throwing in an extra handful of peanuts to make a perfect batch.

Brittle-type candies containing seeds and nutmeats are an ancient confection that has been made in many countries for centuries.

However, peanut brittle as we know it today likely evolved in the United States as Southern peanuts (a legume) became a popular snack during the time of the Civil War.

By the late 1860s, recipes for peanut candy and boiled molasses candy with peanuts began to appear in cookbooks.

The candy's name "peanut brittle," however, didn't come into common use until around 1900.