You can't beat an old fashioned maple candy recipe for making the best homemade candies you've ever tasted. There's nothing like the flavor of real maple sugar in a confection that's naturally sweet and deliciously divine. 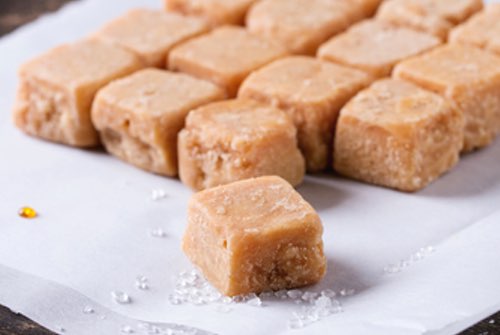 Take one-half as much water as maple sugar. Cook without stirring. When nearly done add butter size of a walnut. Try in cold water, when it begins to harden, stir until it waxes.

When cool enough to handle make in small balls with walnut meats each side. —Mrs. F. H. Coman, Pan-American Recipes

Pour fondant into a shallow pan, and let stand a few minutes to cool, but not long enough to become hard around the edge; stir with a wooden paddle until creamy. It will quickly change from this consistency and begin to lump, when it should be kneaded with the hands until perfectly smooth.

Put into a bowl, cover with oiled paper, and let stand for 24 hours, if possible. It will then be found easier to use. Always make fondant on a clear, dry day. —Fruits and Candies, 1920

This delicious sponge candy is similar to the kind that people often refer to as Seafoam candy. It's crunchy and has a sugary-maple flavor. Just TRY to have only one piece!

Butter a 9x9-inch pan and set aside. In a heavy 2-quart saucepan, combine the syrup, sugar, and vinegar. Bring to a boil over medium heat, stirring constantly until sugar dissolves. Continue cooking without stirring until a candy thermometer reads 300°F (150°C).

Remove from heat and quickly stir in the baking soda; mix well. Immediately pour candy into prepared pan, but do not spread. Cool and break into pieces.

Break sugar in pieces; put into a saucepan with cream and water. Bring to boiling-point, and boil until a soft ball is formed when tried in cold water.

Remove from fire, beat until creamy, add nutmeat, and pour into a buttered tin. Cool slightly, and mark in squares.

The indigenous peoples of North America were the first to collect sap from maple trees and use it to make syrups, sugar, and even maple candy for their children.

They shared their method of making syrup from maple sap with the European settlers who began to use maple products in their recipes since refined sugars were costly and sometimes scarce.

The early cookbooks often featured recipes for homemade candy that called for ingredients people could find locally, often on their own farm.

To provide a ready source of maple syrup, many pioneer farm families in eastern Canada and the northeastern United States tapped their sugar maples when the springtime sap began to run.

Nowadays, it's made easier for us. Pure maple products can be purchased at most local supermarkets and from specialty food stores online, including Amazon.

So, choose an old fashioned maple candy recipe and make a plateful of delicious maple flavored candy this weekend. Enjoy nibbling on a homemade confection from Grandma's day.