These old fashioned cake recipes in rhyme deliver poetry along with your dessert. Bake delicious homemade rhyming cakes suitable for serving at any cultural occasion.

Rhymed Receipts for Any Occasion (1912) 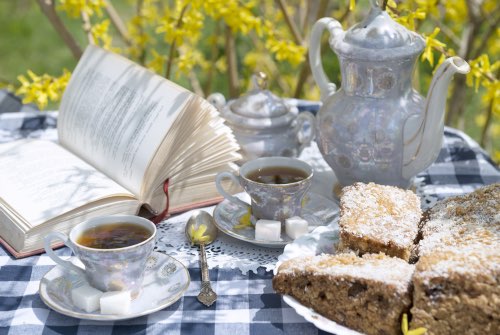 Few things are impossible to diligence and skill. —Samuel Johnson

Sometimes it chances John will sigh
For dainties tasted long ago,
And should you wish to still that cry,
And have him laud you to the sky,
The means are duly set below.

The usual cup of butter take,
And just the same of sugar, too,
Alack! how true with us who bake,
No matter how our brains we rake,
Repeat we must, repeat we do.

Molasses next — rich, nutty, brown —
One cup of this, and one as well
Of strong, cold coffee — best in town —
One egg, four cups of flour down,
Into the mixture go to dwell.

Add cup of raisins — stoned, you know —
And baking-powder, teaspoons three,
While cinnamon will one o'erflow,
And cloves will e'en be measured so,
Thus ends the ancient recipe.

Now if you ask how long it should
Within the oven's arms abide?
I cannot answer if I would,
I only know that it makes "good,"
When the broom proves it's satisfied.

A cream cake recipe in rhyme to make what has been called the Queen of All Cakes!

Best of all among the rarest of good ones. —Cymbeline

Make a good sponge cake (any book
Will tell you how to do the trick),
Use layer-pans in which to cook
The batter, spread a half inch thick.
When they are baked, set by till cold,
Nor let impatience mar their gold.

Then, calling all your native skill,
Whip hard a pint of rich, sweet cream
(Suppose it treated you so ill,
What would you think?). Well, to my theme.
Atone with sugar sifted through.
And add vanilla extract, too.

Next in the mass so fluffy fair
(As 'twere a cloud from Heaven dropped!),
Fold in with the extremest care
One pound of almonds, blanched and chopped.
This 'twixt the layers thickly pour —
Who eats one slice will ask for more.

Ah! willingly I would forsake
Doughnuts, and other simple things,
For this — the queen of ev'ry cake —
How glad I am it has no wings!
And yet it goes so quickly too,
I'm sure it has them. What say you?

I awoke one morning and found myself famous —Byron

In a southern city shady there's a cake named for a Lady,
One who doubtless was the darling of the house of Baltimore,
Naught know we of this fair sister, yet a writer — Owen Wister —
Called his novel by the cake's name — into thousands it did soar!
But it surely was the Cake's fame that did make the story soar —
Merely this, and nothing more.

For that peerless, toothsome matter, this is how they make the batter:
Just one cup of golden butter, two of sugar, I implore!
Cup of milk, and three of flour — half another of that dower —
Two teaspoons of baking-powder, whites of six eggs well whipped o'er,
And one spoon in which rosewater has been duly filtered o'er.
Merely these, and nothing more.

Now there still remains the "filling," which the layers keep from spilling
(And it's thickly used as frosting on the top and sides galore):
Three cups sugar, one of water, boiled until it threads (or "oughter"),
Beaten with the whites of three eggs, in which cup of raisins pour —
Also cup of chopped pecan meats, and five figs sliced thin, you pour.
Only these, and nothing more.

Most people think that rocks are stones
And never meant to eat,
But if you'll make the ones I mean,
You'll find them quite a treat.

One cup of powdered sugar take,
Two-thirds of butter add,
And cream together soft and smooth —
The work will make you glad.

Two eggs, well beaten, go in next,
Then 'tis the flour's turn,
One cup, and half a cupful more —
But any extra spurn.

A teaspoonful of cinnamon,
And one of powdered clove,
A pound of walnuts chopped with pound
Of raisins that we love.

These add with soda — well dissolved
(A teaspoonful — that's all!)
In water hot, to keep the "rocks"
From an untimely fall.

On buttered tins the mixture drop
From spoon — 'twill oddly form —
Bake in an oven not too cold,
Nor yet again too warm.

Taste one when done, and you will own,
Before you are much older.
The only fault with such a rock
Is that it's not a boulder.

Here's a vintage peanut butter cake recipe in rhyme. Fun to make and oh, so delicious to eat!

Here are cakes for dainty eating:
Peanut butter, just a cup,
In the bowl some soda meeting
(Half a teaspoon, you take up),

Add one cup of clear, warm water,
Stir till paste is smooth as silk,
Leaving not a trace, my daughter,
Of the soda white as milk.

Then, still beating like a Vandal,
Mix in flour just enough
To form dough that you can handle —
It must be a plastic stuff.

Knead this well with your ten fingers,
Then cut wafers very thin,
And where moderate heat lingers
Is the place to bake them in.

Let the oven do its duty,
You'll discover by and by
That each wafer is a beauty
When it comes out crisp and dry.

Of all the cake recipes in rhyme, this one's perfect for the Christmas Season.

They are ever forward In celebration of this day. —Henry VIII

Of all the cakes that come for Christmas Day
The little Bethlehems must lead the way,
So simple, too, to make, as you will see
If you will read this rhyme attentively.

First butter take, about a fourth of cup,
Then sugar — brim but once same measure up,
Cream these together till they're smooth as silk,
And add straightway half-cup of sweetest milk.

Next sift one cup — and half one more — of flour
Into the bowl — a sudden fairy shower! —
With two teaspoons of baking-powder white,
Now beat — and beat again — till all is light;

Then in the mixture fold with careful hand
Whites of two eggs, whipped so they stiffly stand,
And, last of all, a dash of flav'ring sweet,
Rose, or vanilla, and the whole's complete.

Put in star pans, but give each room to grow,
And bake in oven, neither quick, nor slow;
Then, when the little shapes have grown quite cold,
Wrap them in softest frosting smoothly rolled;

Let some the red of holly berries wear,
While others don a snowy mantle fair,
But white, or red, this do they clearly say:
"We wish you all a Merry Christmas Day!"

About the Cake Recipes in Rhyme

The novel cake recipes in rhyme were originally published in early editions of the Woman's Home Companion, Good Housekeeping Magazine, the Housewife, Table Talk, and the Boston Cooking School Magazine.