These white cake variations recipes are quick and easy to make. Simply by altering the two basic recipes, you can make over one and one-half dozen (18) different dessert cakes from scratch!

Keep these versatile cake recipes handy in your kitchen for those times when you need a dessert cake in a hurry, one that you would be proud to serve to company. 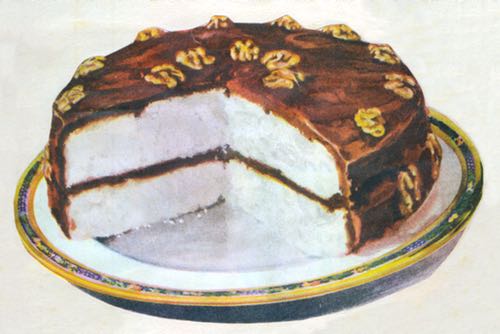 The never-fail basic white cake recipe below can be cleverly adapted to make a series of white cake variations recipes simply by altering a few ingredients or by altering the baking method. Get ready to learn the practical secrets.

Note: All measurements are level.

First: Beat or work the butter with a slotted wooden spoon until it has a whitish appearance around the edges. Gradually add the sugar to the butter, beating the mixture, meanwhile.

To the creamed butter and sugar add eggs yolks, then alternately the 2/3 cupful of milk and the flour with the baking powder. Beat thoroughly until smooth. Add flavoring. Then carefully fold in the egg whites.

Spread Mocha Frosting (see below) between layers and top and sides of cake. Decorate with walnut meats. 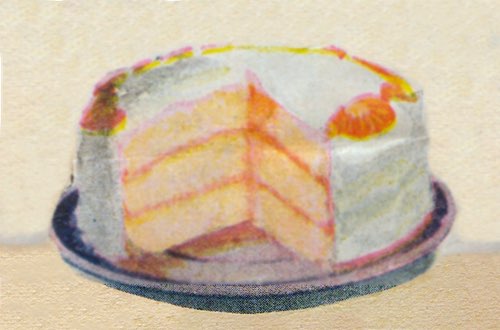 Use the basic white cake (above). Bake in 2 layers or double the recipe and make 3 large layers and add the orange filling below.

Mix in order given. Cook in double-boiler until thick enough to spread. Spread filling between layers.

Cover top of cake with White Mountain Cream Frosting (see recipe below) with orange flavoring added, and 1/4 teaspoonful salt. Spread on top of cake and decorate with thin half slices of orange. 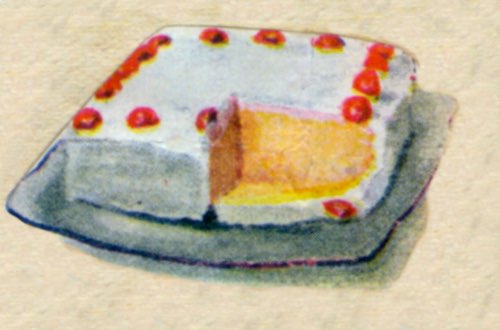 Use the basic white cake. Fold in stiffly beaten whites of 3 eggs instead of 2 whole eggs. Bake in small loaf pan. Cover with Butter Cream Frosting (see below) and decorate with candied cherries cut in halves.

Bake the basic white cake recipe in 2 layers. Use 1/2 cupful nuts, 1/2 cupful raisins or dates, and 1/2 cupful figs, all put through a food chopper and mixed with boiled icing as filling. Ice with plain icing. 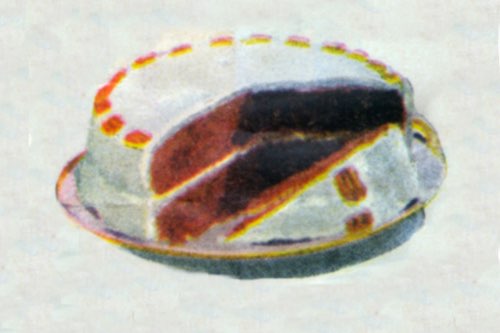 Start with the basic white cake ingredients. Take out 4 tablespoonfuls flour and add 6 tablespoonfuls cocoa. Bake in 2 layers or loaf. Cover with Butter Cream Frosting (see below). Decorate with halves of pecan meats. 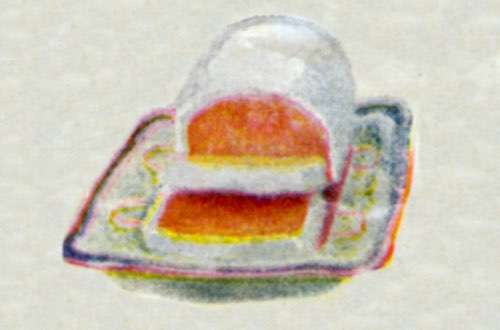 Bake in long loaf and cover with Sea Foam Icing (see below).

To the basic white cake ingredients add the following: 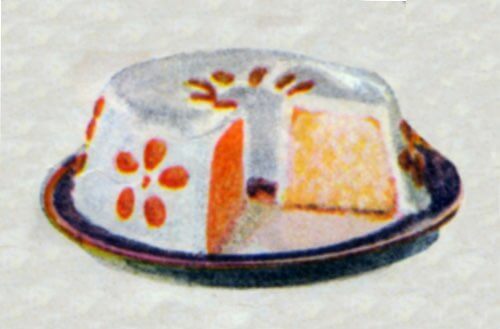 Boil until it spins a thread. Pour hot syrup on a stiffly beaten egg white. Beat until of cake spreading consistency. This creamy frosting goes well with the white cake variations recipes.

Cook until it spins a thread. Pour hot syrup on a stiffly beaten egg white. Add 1/2 teaspoonful cinnamon. Beat until cool and creamy to spread.

Spread frosting between layers and top and sides of cake. Decorate with walnut meats. 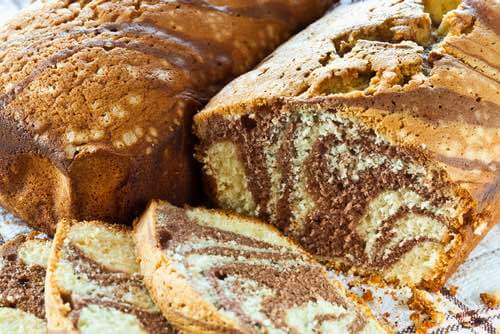 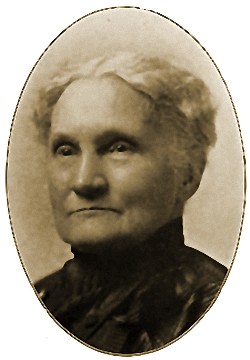 Learn how to bake white cakes from scratch the traditional Pennsylvania German way, with a practical lesson in cake baking that reads as an entertaining story.

Step back in time and enter the cosy farmhouse kitchen of Aunt Sarah Landis, a traditional Pennsylvania German housewife.

You will learn how to use her white cake variations recipes, all adapted from a single old fashioned cake recipe.

Listen in as she shares her prized cake baking secrets and cooking experience with her young niece Mary:

"Aunt Sarah," questioned Mary one day, "will you tell me how it is possible to evolve a number of cakes from one recipe?"

"Certainly I will, my dear," said her Aunt. "For instance, take the following white cake variations recipe from which I have for years baked layer cake.

You may have other cake recipes given you, equally as good, but I feel positive none are better."

The cakes made from this versatile recipe is not rich enough to be unwholesome, but a good, reliable, inexpensive, easily made WHITE CAKE, with which I have NEVER had a failure

The basic recipe, as you know, consists of 1-1/4 cups of granulated sugar, 1/2 cup of a mixture of butter and sweet lard (or use all butter), 1/2 cup sweet milk, 2 cups flour, and 2 teaspoonfuls baking powder. And 3 eggs.

The simplest manner of baking this cake is in two square cake pans in a moderate oven (350°F). When baked, take from pans and ice each cake with a boiled chocolate icing and put together as a layer cake.

Or, ice each cake with a plain, boiled white icing and, when this is cold, you may spread over top of each cake unsweetened chocolate, which has been melted over steam after being grated.

When cake is to be served, cut in diamonds or squares. Or add to the batter 1 cup of chopped hickory nut meats, bake in 2 layers, and cut in squares.

Or, the following white cakes can be made simply by altering the basic white cake variations recipe.

For a CHOCOLATE LOAF CAKE, add two generous tablespoonfuls of unsweetened melted chocolate to the batter just before baking.

If you wish a CHOCOLATE LAYER CAKE, use the same batter as for the chocolate loaf cake, bake in two layer pans and put together with white boiled icing.

Or, add to this same batter one scant teaspoonful of cinnamon, ginger, 1/2 teaspoonful of grated nutmeg and cloves, a cup of raisins or dried currants, and you have a SMALL FRUITCAKE.

Or, add a small quantity of thinly shaved citron to the original recipe, flavor with lemon, bake in a loaf and spread a white icing flavored with lemon extract over top of cake, and you have a LEMON CAKE from scratch.

Or, add chocolate and spices to one-half the batter (about one-half as much chocolate and spices as were used in batter for fruit cake) and place spoonfuls of the light and dark batter alternately in a cake pan, until all batter has been used, and you will have a cheap, old fashioned MARBLE CAKE.

Or, bake the basic white cake recipe in two-layer pans, placing between layers either tart jelly, a creamy cornstarch filling, grated coconut, apple cream filling, or you might even use half the recipe given for the delicious icing or filling for LADY BALTIMORE CAKE.

For the last of the white cake variations recipes, bake SMALL CAKES from this same versatile recipe.

Mary, you should have small pans for baking these delicious little cakes, similar to those I possess, which I ordered made at the tinsmith's. I took for a pattern one Frau Schmidt loaned me.

They are the exact size of (round) one-quarter pound boxes of Royal® baking Powder. Cut the box in three pieces of equal height, and your cakes will be equally as large in diameter as the baking powder box, but only one-third as high. 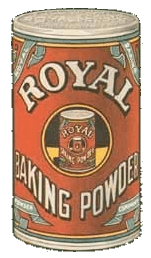 I place a generous tablespoonful of the batter in each of the twenty-four small pans, and cakes rise to the top of pans. Usually, I have batter remaining after these are filled.

Ice all the cake except the top with a white boiled icing or chocolate icing.

These small cakes keep exceedingly well, and are always liked by young folks and are particularly nice for children's parties.