The fact that there is an original Thomas Jefferson Ice Cream Recipe comes as a surprise to most people. Did you know that Jefferson returned to America from his stint as ambassador to Paris in 1789, with a handwritten recipe for French vanilla ice cream and his own ice cream making equipment?

Not long afterwards, Jefferson had a special ice-house built at Monticello so that he could indulge in making ice cream and freezing desserts the year-round. He often served his distinctive ice cream to favored guests at Monticello. Now, you can experience its taste! 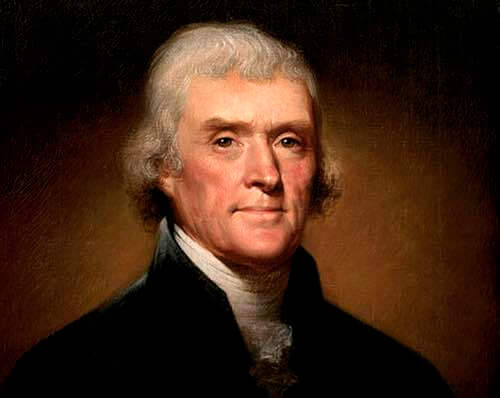 The flavor Thomas Jefferson most loved to eat was old fashioned French vanilla, and on at least one occasion he had a special order of vanilla bean pods sent to him from Paris. He was a serious ice cream lover!

The original Thomas Jefferson Ice Cream Recipe is currently on display at the United States Library of Congress (see image below).

It's America's oldest-known recipe for old fashioned vanilla ice cream, and the exact transcript is given word for word so you can follow it along.

2 bottles of good cream.
6 yolks of eggs.
1/2 lb. sugar
mix the yolks & sugar
put the cream on a fire in a casse-
role, first putting in a stick of Vanilla.
when near boiling take it off &
pour it gently into the mixture
of eggs & sugar.
stir it well.
put it on the fire again stirring
it thoroughly with a spoon to
prevent it's sticking to the casse-
role.
when near boiling take it off and
strain it thro' a towel.
put it in the Sabottiere
then set it in ice an hour before
it is to be served. put into the
ice a handful of salt.
put ice all around the Sabottiere
i.e. a layer of ice a layer of salt
for three layers.
put salt on the coverlid of the
Sabotiere & cover the whole with
ice.
leave it still half a quarter of an
hour.
then turn the Sabottiere in the
ice 10 minutes
open it to loosen with a spatula
the ice from the inner sides of
the Sabotiere.
shut it & replace it in the ice.
open it from time to time to de-
-tach the ice from the sides.
when well taken (prise) stir it
well with the Spatula.
put it in moulds, justling it
well down on the knee.
then put the mould into the
same bucket of ice.
leave it there to the moment
of serving it.
to withdraw it, immerse the
mould in warm water,
turning it well till it
will come out & turn it
into a plate.

How Thomas Jefferson Made Ice Cream

Jefferson was shown how to make ice cream in France around the time he penned the original Thomas Jefferson Ice Cream Recipe.

The early French ice creams were laboriously frozen in a covered freezing pot called a sarbotiere. These pots were often made of pewter, and they were immersed in a finely crafted wooden bucket filled with chipped ice and either saltpetre or coarse rock salt.

First, an ice cream mixture was made from recipes similar to the original Thomas Jefferson Ice Cream recipe. Then, the mixture needed to be beaten by hand and poured into the sarbotiere, which then had to be agitated to freeze the cream.

The method used was to hold the sarbotiere by its handle and rapidly swish it up and down in the bucket of ice water while simultaneously rotating it right and left with a strenuous wrist action that often had to be maintained for up to an hour.

Not an easy method at all. It was hard work!

Occasionally, the semi-frozen ice cream mixture was scraped from the sides of the sarbotiere with a houlette or what the English called a spaddle, a small spade-like spatula with a long handle, and again beaten.

Not an easy method at all. It was hard work! It was a long and difficult process, but the results tasted delicious. 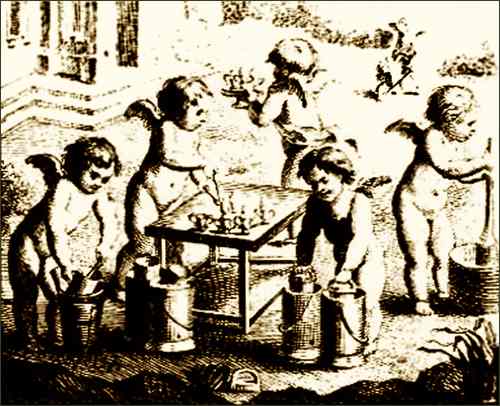 In the remarkable 18th-century woodcut above, cherubs are depicted involved in the entire process of ice cream making.

The cherubs can be seen busily bringing fruit from the garden, crushing it and preparing it for freezing, agitating the sarbotieres in their buckets to freeze the ice cream mixture, scraping the semi-frozen mixture from the sides of the sarbotiere using a houlette, and spooning the finished ice cream into ornate ice cream goblets for serving. 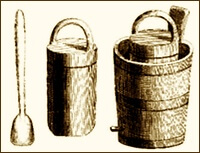 The smaller woodcut illustrates a "houlette" or spaddle, and a typical sarbotiere in the center with its lid and handle. To make ice cream, you had to remove the lid and place the ice cream mixture inside the sarbotiere.

You would then re-seal the sarbotiere and place it inside its "seau" or wooden ice bucket as shown, and the bucket was then filled with a mixture of ice and salt.

Because of the excessive time and labor involved in making ice cream, and the requirement for a year-round source of ice, for many years ice cream remained a treat reserved for well-off families with servants.

Thanks to today's kitchen freezers and ice cream making appliances, you can experiment with the original Thomas Jefferson Ice Cream Recipe and get to taste the same vanilla bean ice cream that President Jefferson was so fond of eating.