After the soldiers had returned home from the American Civil War in 1865, it became difficult to find work in most American cities, so many unemployed immigrants living in those cities became ice cream vendors.

As in London, England, they were called Hokey Pokey Men because they often shouted Ecco un poco in Italian which means, when loosely translated, "Here's a little piece."

Sadly, the term "hokey pokey" soon became identified with poor-quality ice creams, as it was sometimes made of questionable ingredients under unsanitary conditions.

It was not uncommon for consumers to become ill after eating it. And the way the frozen treat was served didn't help either, as you'll read below. 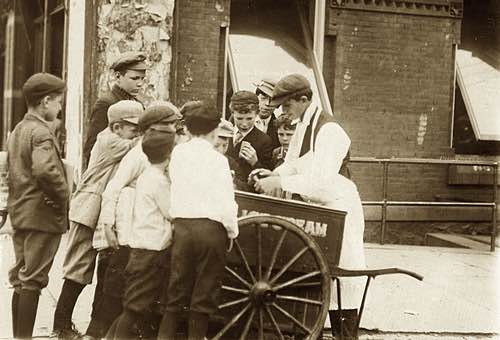 You might want to reduce the recipe quantities when making this ice cream at home. This original 1890 recipe makes over 1 gallon of ice cream!

This is not an ice cream proper, but a species of frozen custard made of milk, eggs, sugar, gelatine, and flavoring:

Take 2 ounces of gelatine, dissolve in 1/2 pint of milk or water, then to 4 quarts of milk and 8 eggs slightly beaten add 1-1/2 pounds of sugar and the thin yellow rind of 2 lemons, and a pinch of salt.

Put the ingredients into a clean, bright basin, place on a moderate fire, and stir constantly till it begins to thicken; then remove quickly, and pour it into an earthen pan and continue to stir it till nearly cold, then add and stir in the dissolved gelatine; pour all into your freezer and freeze as for other ices.

When frozen it may be put in small boxes about three inches long by two inches wide, or it may be wrapped in waxed paper and kept ready for sale in an ice cave (freezer). The office (purpose) of the gelatine is to solidify the compound and assist its "keeping" qualities.

Frozen hokey pokey was sold for a penny from pushcarts with an ice cave (freezer compartment), and the customers either licked it from a shallow glass known as a "penny lick" or it was received in a small folded-paper box or hand-wrapped in a piece of waxed paper.

When customers finished eating their ice cream from the glass penny lick, the so-called "penny lickers" were returned to the vendor who simply gave them a brisk wipe with his ever present rag before refilling them for his next customers.

The welcomed invention of the edible ice cream cone around 1900, helped to make street sales of frozen ices more hygienic.

Are you curious what the hokey pokey bars tasted like? Make the original hokey pokey ice cream recipe above, and you can capture the authentic taste of this historical ice cream. It's a real conversation starter when served to friends.