This fun coffee can ice cream recipe makes a frozen treat that's fun at any time of the year. And, believe it or not, ice cream made in an ordinary coffee can taste amazingly good!

Some people have named it "kick the can ice cream" or "rock n' roll ice cream," but it's all the same thing. Below you'll find both an old fashioned method and an easier modern method for making coffee can ice cream. Fun to make and delicious! 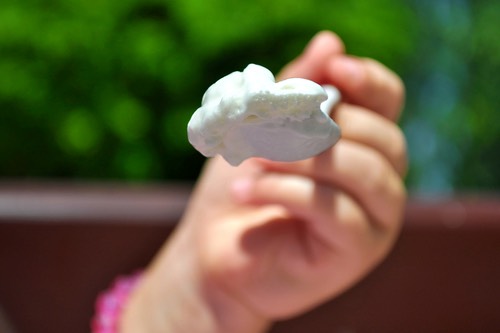 This unique way of making ice cream is an excellent method for demonstrating ice cream making and freezing principles to school-age children.

Kids of all ages have enjoyed trying it for generations as shown by the 1891 article republished below. Don't worry, I've also followed it with an easier method.

Undoubtedly, there are clever people in the world, who have plenty of time on their hands, and a capacity for taking pains, who can make ices in small quantities by simply putting the material to be frozen into a canister, surrounding this with ice and salt, then turning it about and stirring it from time to time until it is frozen.

Thus, an individual who once very long ago was a girl much given to making experiments in cookery, can well recall retiring with one of her sisters into an arbor in the home garden when snow was thick on the ground, with a tin containing milk and rolling this about in ice and salt until it was a solid mass.

The refrigerating process took a long time, and the operators were stiff with cold before it was ready, but the milk when it did freeze was most delightful and was considered a dainty most suitable for the season.

The objection, however, to this rough and ready method is that it is very tedious, and "life is short"; also, that it is so apt to turn out a failure.

The lid of the canister must fit very closely, and the canister itself must be thoroughly well-made, for if only a small quantity of the saltwater gets into the pudding, not only will the custard freeze less readily, but it will also melt more quickly when turned out; while if saltwater to taste gets into the pudding, the flavor will be spoilt. —Phyllis Browne (1891)

Ice Cream Mixture for One Small Serving: In a small bowl mix 1/2 cup coffee cream or half & half, 1/2 teaspoon of vanilla flavoring, and 3 teaspoons of sugar.

Increase the homemade coffee can ice cream recipe ingredients to make several servings at once while following the directions below.

Here's how you can simulate the old fashioned rolling can method described in the 1891 article (above) to make ice cream indoors at any time of the year.

1. Place your favorite ice cream recipe mixture in a standard coffee can to within 2 inches from the top, seal the lid airtight with duct tape, and then place it inside a large economy-size can, or another suitable container.

2. Fill about 3/4 of the space between the two cans with a mixture of 2/3 ice or snow and 1/3 crushed rock salt (water softener salt or ordinary table salt can be used in a pinch), then tightly seal the larger can.

3. Now place the can on its side on the floor or ground and roll it back and forth for 10 to 15 minutes.

4. Next, open the large can over a sink, take the small can out, and after wiping all the salt and water off, open it and stir the semi-frozen mixture.

5. Reseal the cans after topping up the ice and salt, and continue rolling for another 10 to 15 minutes to finish freezing your ice cream.

Like the young girl in the 1891 anecdote above, you might also decide that "life is short" before attempting this again, but kids always find it fun to try.

The coffee can ice cream recipe is terrific for use as a class show-and-tell, or for a student science project.

Similar to the ice cream in a bag recipe, it can provide a fun activity for people of all ages. Why not try it? The results really do taste delicious.

When it is winter outside, you can dispense with the outer coffee can when trying the homemade coffee can ice cream recipe.

Simply place your ice cream mixture in a standard coffee can, seal the lid airtight with duct tape, and then roll the can on the snow and ice when the outside temperature is below freezing.

Sprinkling a handful of salt on the ice might help a little to lower the freezing temperature a bit. And aside from the ice cream, It's sure to give you some quality time outdoors with your children.