These original spice ice cream recipes were quite popular in Grandma's day for making frozen treats. Some spicy ice cream flavors are now thought unusual while others like eggnog have become more conventional.

Clove ice cream was much esteemed in France, while both cinnamon and ginger were popular flavors in England during the Victorian Era. Is it called ICE cream or SPICE cream? You decide! It's delicious whatever you call it. 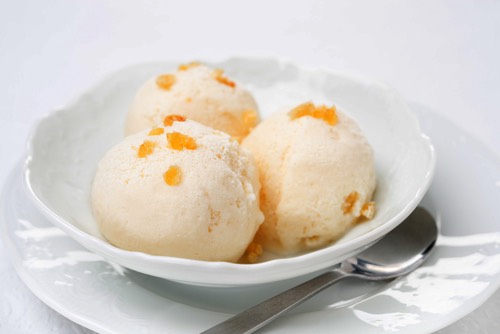 Homemade ice cream with the spicy taste of ginger is much superior to the commercial store-bought variety.

Plus, if you love to eat chocolate brownies or rich chocolate layer cake, then try it with a scoop of this old fashioned ginger ice cream on the side. Totally delicious!

I love the taste of this creamy ice cream with its chewy bits of ginger — so amazingly flavorful! If you love the refreshing taste of ginger, you must try the real thing!

Jars of preserved ginger in syrup, and candied ginger pieces, can be purchased in supermarkets and specialty food stores in most areas.

Six ounces of preserved ginger, one quart of cream, half a pint of the syrup from the ginger, sugar sufficient to sweeten it with to taste, and the juice of two lemons.

Pound the ginger in a mortar (or chop fine), add the cream, etc., and freeze in ice cream freezer.

Pound coarsely two ounces of the best cloves in a mortar; add to it four ounces of white sugar; boil two quarts of milk and throw in the cloves and sugar mixed, let it simmer for ten minutes tightly covered.

Then add one quart of cream, with half a pound of white sugar, let these only scald; then press all through a hair (fine) sieve, and freeze it; a nice after-dinner ice cream.

Prepared in the same manner as the clove above. Be careful to select the best stick cinnamon and only break it; not pounded as the cloves. 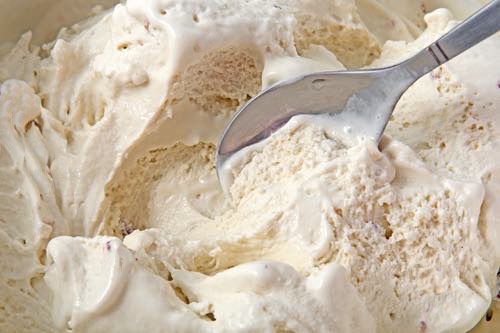 Take one quart of rich cream, and put it to boil in a farina kettle (double boiler). Beat up the yolks of eight eggs, with one pound of pulverized sugar, flavor with grated nutmeg and half a pint of best brandy (or rum).

Stir the beaten yolks and sugar into the boiling cream; stir constantly for one minute; remove from the fire and stir until cold. Lastly, whip in the stiff-beaten whites of four eggs. Freeze.