However, this wasn't the first published recipe for a chocolate cake. There were others, and you'll find them below such as the Chocolate Loaf with its chocolate frosting, and the Brod Torte that doesn't call for any flour.

These moist dessert cakes are easy cakes to make and you'll be proud to serve on special occasions or anytime. Treat yourself to one of these amazing German cakes today. 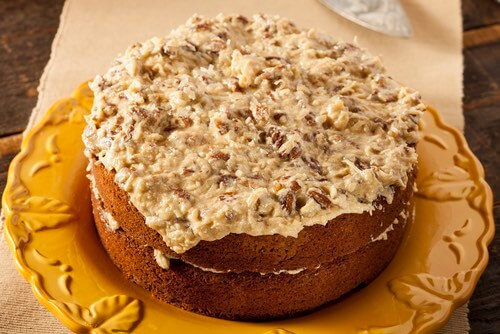 Baker's German's Sweet Chocolate (48% cacao) might be unavailable in some grocery stores and locations.

You can substitute 1 ounce of Baker's Bittersweet Chocolate (66% cacao) plus 1 teaspoon sugar for each ounce of German's Sweet Chocolate called for in the original German chocolate cake recipe.

Melt chocolate in boiling hot water, then allow to cool. Cream butter and sugar together until fluffy. Add 4 egg yolks to sugar mixture, one at a time, and beat well after each. Add melted chocolate and vanilla extract and mix well.

Sift together flour, salt, and baking soda into a large bowl and add alternatively with buttermilk to chocolate mixture, always beating well. Beat cake batter until smooth, then gently fold in 4 stiffly beaten egg whites. The sides of the cake were traditionally NOT frosted.

Pour batter into 3 round cake pans (deep 9-inch layer pans), lined on bottoms with parchment paper. Bake cake layers in moderate oven (350°F) 35 to 40 minutes. Remove from oven and allow to cool on a wire rack. Ice "top only" with the coconut pecan frosting and sprinkle a few pecan halves for decoration.

* German's is a trademark of General Foods Corp. 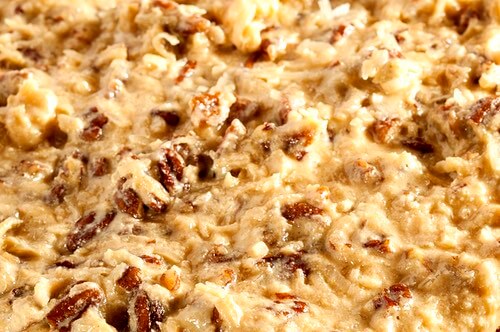 The original German Chocolate Cake Recipe called for this coconut pecan frosting to be spread on the top only, as the sides of the cake were to be left uncovered to display the golden filling between the layers.

Beat frosting until thick enough to spread between cake layers and on top of the cake. Makes about 2-1/2 cups. 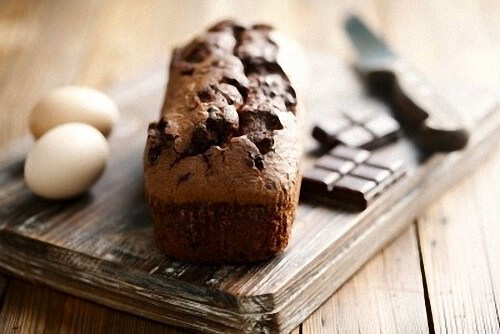 To maintain a moist chocolate cake, after baking and cooling, cover your cake with plastic wrap or keep in an airtight container until ready to serve.

Boil together chocolate, sugar and milk in a large saucepan. Add butter and when cool add yolk of eggs; then the flour, flavoring, and stiffly beaten whites of 2 eggs. Beat all thoroughly and bake (350°F) in a loaf or layers till done. Ice with creamy chocolate frosting, if desired.

Boil together 5 tablespoons grated chocolate, 3/4 cup granulated sugar, 2 tablespoons milk, and 1 egg in a medium saucepan. When the mixture begins to thicken and look creamy, spread on cake. If baked in layers, ice on top and between the two layers.

One cup of flour, 1 teaspoonful of baking powder and 1 cup of granulated sugar were sifted together into large bowl.

Two eggs were broken into a cup, also 1 large tablespoonful of melted butter, then fill up the cup with whole milk, add to sugar mixture, and beat all ingredients well together. Flavor with vanilla extract and add 2 extra tablespoonfuls of flour to the mixture. Bake (350°F) in two round layer cake pans.

Place the following mixture between the two cake layers: 1/2 cup of grated chocolate, 1/2 cup sugar, and 1/4 cup of liquid hot coffee. Cook together a short time in a medium saucepan until the consistency of thick heavy cream, then spread as filling between layers.

One-half cup of brown sugar, 1/2 cup of sweet milk and 1/2 cup of grated, unsweetened chocolate. Boil all together until thick as cream; allow it to cool.

Mix 1/2 cup of butter with 1/2 cup of brown sugar. Add two beaten eggs, 2/3 of a cup of sweet milk and vanilla flavoring to taste.

Beat this into the boiled mixture and add 2 cups of flour sifted with 2 teaspoonfuls of baking powder. Bake (350°F) in three layers and put together with cocoa cake filling.

Place sugar, butter, and cocoa in a bowl and mix to a smooth paste with cold coffee. Flavor to taste with vanilla and spread on cake.

Put into a small cake pan and bake half an hour in a moderate oven (375°F). When eggs are cheap and plentiful and when you have left over rye bread, this is an economical cake, as NO flour is used. It is a delicious and resembles an ordinary chocolate cake. 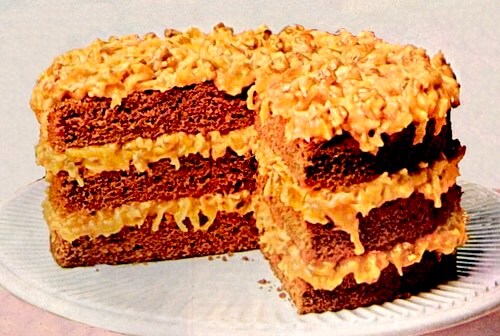 The amazing thing is this is NOT a "German cake" at all, it's an American creation, as the original German Chocolate Cake Recipe had its origins in the American Midwest.

The cake is called "German" because a Walter Baker & Company employee, an English immigrant named Samuel German, invented German's Sweet Chocolate back in 1852, and "German's Chocolate" became associated with the cake. 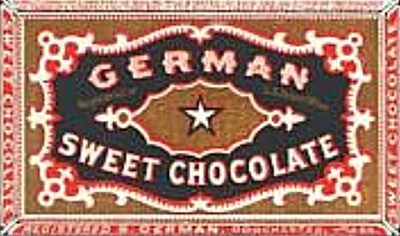 The delicious moist cake has a Sweet Chocolate flavor, a crunchy gooey coconut pecan filling, and a topping of coconut-pecan frosting which is the traditional German Chocolate Cake frosting.

This famous chocolate cake makes a great birthday cake when served with ice cream, and it's a classic cake to serve and enjoy anytime. For more information about its history, see Wikipedia.

However, the original German Chocolate Cake Recipe wasn't the first published recipe for a chocolate cake in North America, as there were numerous others that also called for Baker's Chocolate, including Mary's traditional Chocolate Layer Cake with its creamy cocoa filling lightly flavored with coffee and vanilla.

And don't forget the old fashioned Chocolate Loaf made rich with unsweetened chocolate is so simple, so delicious! 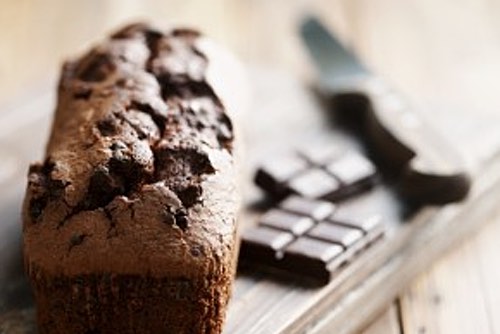 These homemade chocolate cakes are easy to make, and they call for all-natural, ingredients. You'll love making them, and you'll love eating them even more. They're chock full of goodness, and they are sure to become family favorites.

So by all means, try the original German Chocolate Cake Recipe, but try the other cake recipes also.

* German's is a trademark of General Foods Corp.