Learning how to make homemade fudge is fun for the whole family. Not every batch of fudge will turn out perfect when you're just beginning, but you'll find that even your mistakes taste good.

And unless you seriously scorch the sugar mixture, nothing ever goes to waste! Simply choose one of the old fashioned fudge recipes to begin with, and soon you'll have a creamy delicious treat to nibble on. 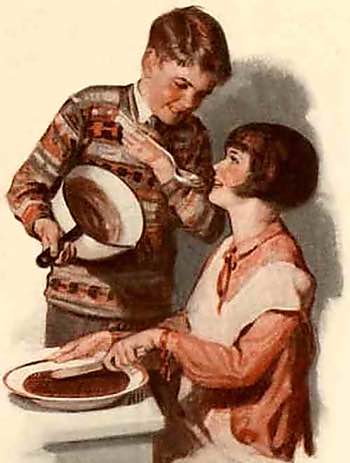 Ever since fudge became popular in North America in the late 1890s, it has been the perennial favorite among lovers of homemade candy. Some call it the Queen of Candies because it tastes so rich and delicious.

Candy lovers enjoy its smooth, creamy, melt-in-your-mouth taste, and if you're careful to follow the three steps given below when learning how to make homemade fudge, you'll always turn out the best fudge imaginable.

Cook the chocolate with the milk or cream, and stir constantly until the mixture is creamy smooth to prevent curdling.

Add the sugar and keep stirring the mixture until it boils to keep the mixture perfectly smooth.

Once the candy is cooked to reach the candy stage recommended in the recipe, cool it to lukewarm before beating, to prevent graininess, then beat it well to add air to the mixture and make it creamy smooth in texture.

During the cooking stage, always test the candy mixture in cold water. You should remove the mixture from the fire immediately after it reaches the temperature stage mentioned in the recipe; for example, soft ball, firm ball, and so on.

Then, pour the cooked fudge into a shallow pan to cool and remember to score it with a knife while it's still warm, so it can be easily cut later without breaking.

My How to Make Candy article clearly explains the candy temperature stages and how to test for them.

This old fashioned brown sugar fudge recipe is so quick and easy to make. I made it often during my high school years as a treat for finishing my evening's homework, and it's a comfort food that I still enjoy.

Add nuts later if desired. Beat with wooden spoon until mixture starts to thicken. Put in pan and mark in pieces. Set out to cool.

How to make Educated Liberty Fudge:

Add chocolate to water and milk and place over low heat, cook and stir until blended; add sugar, salt, stir till it boils; continue boiling without stirring till soft ball stage.

Remove from heat, add butter; cool, add vanilla, then beat till it thickens; add nuts and continue beating till it loses its gloss; turn into greased 8x4-inch pan, cut in squares.

How to Educate your Liberty Fudge:

Add 1 cup sifted confectioners' sugar to 1/2 egg white, then beat, then use for decorating. Pipe a letter of the alphabet on each square of fudge.

The History of Homemade Fudge 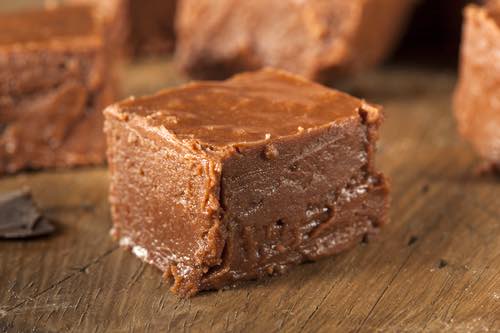 After World War One and throughout the 1920s, fudge making parties had become the weekend highlight.

An evening's game of cards or a family picnic never seemed complete unless there was a plateful of warm fudge available to munch on. Fudge had become a familiar part of everyone’s life.

Cookery experts published all the best homemade fudge recipes in all the popular newspapers and family magazines. Most kids learned how to make homemade fudge as a normal part of their growing up.

Meanwhile, college students enjoyed the economy of making fudge on campus, and there was no end to the variety. Fudge squares were sometimes decorated with icing for fancy occasions and to add greater appeal.

For practice in making the Queen of Candies, there's a college recipe above for what became known as Educated Liberty Fudge. However, if you're new to fudge making, I would suggest starting with the easier Brown Sugar Fudge.

As your candy making improves, you'll find the demand for your fudges will increase. That's because everybody loves its old fashioned taste!