These original ice cream float recipes were invented by pharmacy soda fountain operators in the 1890s. The first floats consisted of citrus fruit drinks with a layer of heavy cream, whipped cream, or sometimes grape juice "floated" on top. 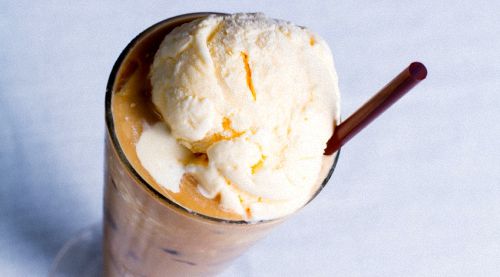 Drop in a ball of frozen pineapple ice or ice cream (vanilla ice cream will do) to float on the surface and the Alaska Snowball is a winner. Price—15 cents; all milk, 20 cents.

Fill a 12-ounce glass within an inch of the top with root beer, then float on top with spoon about 2 ounces plain, sweet, rich cream. The Root Beer Cream Float serves well as a novelty and should be priced at 10 cents.

Fill a 12-ounce glass to within an inch of the top with plain lemonade, then carefully float on the top a sufficient quantity of grape juice to fill the glass, being careful not to disturb the lemonade. A good long drink, and a thirst quencher. Price—10 ounces, 10 cents.

This vintage ice cream float recipe calls for frozen sherbet instead of ice cream, and it's especially delicious!

Fill the glass with carbonated water and stir until all is thoroughly mixed. Can also be dispensed as a "float," adding the grape juice last, so it floats on top of mixture.

The author states that this grape trickle makes "a very refreshing drink" and can be readily sold for 10 cents at a good profit. —J. M. Bingaman

Mix the first three ingredients in a 12-ounce glass, three-quarters fill glass with carbonated water, add the ice, top with grape juice, and float the whipped cream over all. Charge 15 cents.

How to Make Ice Cream Floats 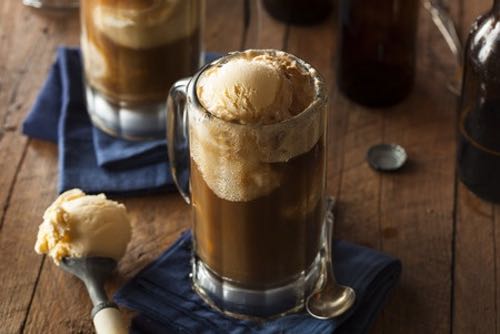 In keeping with original ice cream float recipes, begin by pressing a generous scoopful of frozen vanilla ice cream firmly into the bottom of a large frosted drinking glass.

Next, slowly, and carefully, fill the glass to the brim with your favorite flavor of soda pop by pouring the ice-cold pop down the sides of the glass to avoid having it foam over the brim.

Finally, carefully insert a couple of drinking straws into the glass along with a long-handled spoon to eat the melting ice cream. The ice cream eventually melts and floats to the top of the glass.

To make one, first drizzle two to four tablespoonfuls of your favorite soda syrup over a scoopful of ice cream in the bottom of the glass and then carefully fill the glass to the brim with chilled carbonated water.

Serve with two straws and a long-handled spoon to eat the melting ice cream.

Try combining your favorite flavors of homemade soda pop and ice cream together to suit your taste. Colorful names were often given to the different ingredient combinations.

For example, a root beer float with vanilla ice cream is traditionally called a Black Cow. Have fun naming your own frosty beverage creations.

Also, there are several ice cream float recipes that call for heavy cream, grape juice, or frozen sherbet to be floated on top of the beverage instead of ice cream.