Homemade ginger beer sparkles in the glass with a pleasant and truly unique flavor — fresh, spicy, yeasty, and with just the slightest hint of alcohol. It's an amazing drink that you will love. 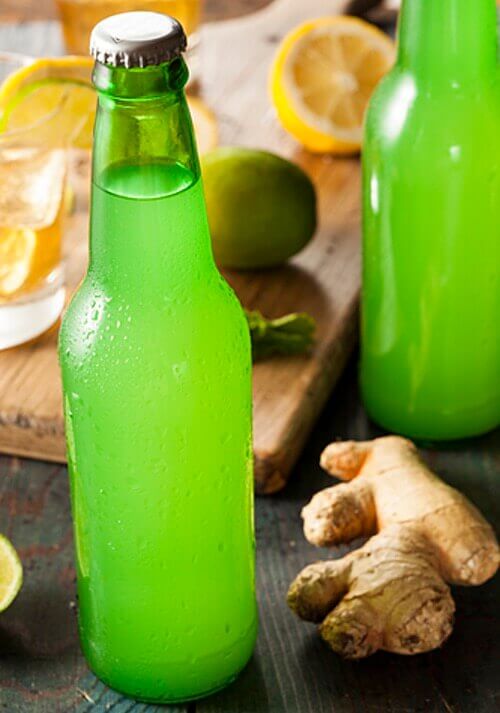 Bruise the ginger, and put into a large earthenware pan, with the sugar and cream of tartar; peel the lemons, squeeze out the juice, strain it, and add, with the peel, to the other ingredients; then pour over the water boiling hot.

When it has stood until it is only just warm, add the yeast, stir the contents of the pan, cover with a cloth, and let it remain near the fire for 12 hours.

Then skim off the yeast and pour the liquor off into another vessel, taking care not to shake it, so as to leave the sediment; bottle it immediately, cork it tightly; in 3 or 4 days it will be fit for use.

White sugar, 3/4 pound; cream of tartar and ginger root, bruised, each 3/4 ounce; juice and grated yellow of 1 lemon; water, 1 gallon; fresh yeast, 1 tablespoonful; essence of wintergreen or sassafras as you prefer, or half as much of each, if a mixed flavor is liked.

It will be ready in about 3 days. More or less flavor may be used to suit different tastes.

Boil 2 ounces of best white Jamaica ginger root, bruised, in 6 quarts of soft water; strain, and add 1 ounce of cream of tartar and 1 pound of sugar.

Put on the fire and stir until the sugar is dissolved, then pour into an earthen jar and add 2 drams (1-1/2 teaspoons) of tartaric acid and the grated rind of one lemon.

Let cool down to the surrounding temperature, add 1 ounce of fresh yeast, stir well and bottle at once, tying the corks down firmly.

The "pop" will be ready for use in two or three days if the weather is warm, or if kept in a warm place.

Mix all ingredients together in a large stone crock or crockery bowl; allow to ferment for 24 hours; bottle. Brew will be ready for use in 2 weeks.

I recall, as a child, my mother's mystification at my brother's sudden indifference to raspberry vinegar until a series of loud explosions led to the discovery of a ginger beer still in our cellar, fermentation having been speedier than the recipe had indicated.

The young brewer had secured the corks of the stone bottles with wire instead of string.

Put on the heat, then stir until all the sugar is dissolved; then put into an earthen jar, now put in tartaric acid 1/4 ounce, and the rind of 1 lemon, let it stand until 70°F, or until you can bear your hand in it with comfort.

Then add two tablespoonfuls of yeast, stir well, bottle for use, and tie the corks; make a few days before it is wanted for use.

Put into a kettle, two ounces of powdered ginger (or more if is not very strong), half an ounce of cream of tartar, two large lemons cut in slices, two pounds of broken loaf sugar, and one gallon of soft water.

Simmer them over a slow fire for half an hour. When the liquor is nearly cold, stir into it a large tablespoonful of the best yeast. Bottle for use.

How to Make Ginger Beer

Watch the short YouTube video and learn how to make ginger beer entirely from scratch. The old fashioned ginger beer recipe calls for only three ingredients!

Also read my article on How to Carbonate Drinks where I reveal the secrets of soft drink carbonation and how to stabilize the carbonation level in five easy steps.

Some old fashioned ginger beer recipes call for loaf or lump sugar, which was the form in which the sugar was once sold. Refined sugar was not sold in its present-day granular form until the end of the 1800s.

It was sold in a cone-shaped, solid block that was rounded at the top, and it often had to be broken into lumps and clarified before use by boiling it with water and white of egg to remove its impurities.

Any of today's granulated sugars can be substituted in recipes. However, the type and quantity of sugar you use will affect both the flavor and the color of the finished product.

Brown and white sugars are about equal in their degree of sweetness, but brown sugar also adds its own distinctive flavor and color, and is excellent for use in some beverages. Just experiment to learn your preference. 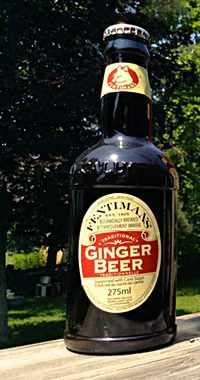 And although forced carbonation is an easy and convenient carbonation method, it loses the old fashioned yeasty taste of natural fermentation.

However, there are some bottlers that refuse to compromise and continue to maintain the Old World traditions. Fentimans is one brand of British commercial ginger beer that I really enjoy drinking whenever I'm too lazy to make my own.

Not only does Fentimans use the finest ingredients, such as premium ginger root and quality extracts of yarrow, juniper, and speedwell, but they employ a traditional 7-day brewing and fermentation process.

You can tell Fentimans is the real deal because the label on each "Botanically Brewed" bottle instructs to "Upend Before Pouring" thereby allowing the bits of fermented ginger to mix throughout the beverage for maximum flavor enjoyment.

Compared to typical North American ginger beers, Fentimans has a unique, less-sweet taste because of its true fermentation process. It's the real McCoy. 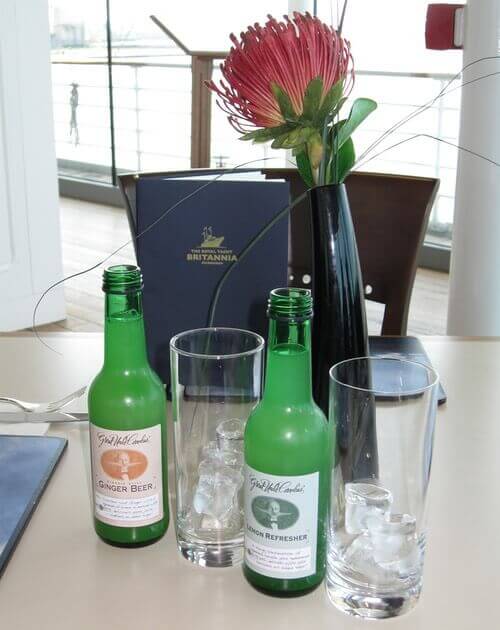 While on a visit to Edinburgh, I was served a chilled Great Uncle Cornelius's Ginger Beer in the HM Yacht Britannia's Royal Deck Tea Room. Bottled by James White, it's a "still" ginger beer, meaning it's not carbonated.

The fresh and tangy flavor of pressed ginger juice is blended with apple juice to produce a smooth tasting beverage that's very refreshing to drink.

By experimenting with the Ginger Beer Recipe Without Yeast, you can produce your own unfermented "still" ginger beverages. 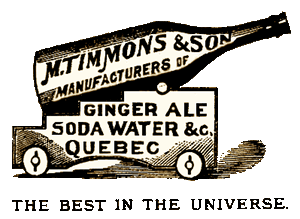 As you experiment with making homemade soft drinks, you will get to experience the wholesome and delicious beverages your ancestors once enjoyed as children. Once you taste a homemade ginger beer, you'll love it.

Our modern ginger ales evolved from these earlier carbonated beverages. From the time when I was a kid, I have always loved the taste of ginger ale. But, once I finally got to taste homemade ginger beer... WOW. Yes, making it yourself does require some time and effort, but once you try it, you'll love it.

Choose an old fashioned ginger beer recipe and have fun experimenting. Learning to make your own soda pop is loads of fun, and it's so very easy when the little secrets have been mastered.

Simply follow the old recipes, adjusting the quantities when needed. Soon, with patience and some practice, you will become an accomplished carbonated beverage brewer.