How to Tie Various Knots

Learn how to tie various knots, and you will be amazed at how often your new skill will come in handy. Below you will find instructions for tying over 20 basic knots that you will find uses for in the kitchen, home, garden, and boating.

Learn How to Tie Various Knots 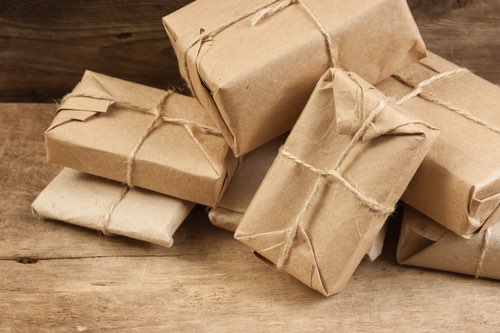 Few persons know how to tie various knots nowadays. It is as easy, indeed easier, to make a neat, firm knot, one that's easy to untie, as one clumsy, insecure, and readily jammed.

When practicing how to tie various knots, it's better first to use a coarse cord or ﬁne rope for easier handling. The 7 knots described below can all be mastered in an hour's practice, and will be found of daily use.

As you learn how to tie various knots the old fashioned way, you will find the Reef Knot to be one of the most practical of them all. It's a basic knot that's quite strong yet very easy to tie.

Also called the ﬂat knot, is the one best adapted for ordinary use in tying the two ends of a string. It is neat, ﬂat, does not readily slip, and is easily untied.

It is the same as is used in tying shoelaces and neckties, except that the ends are drawn through. It is essential that the two parts of each string should be on the same side or there will be formed a "granny" knot.

Also called the weavers' knot, it's used where great firmness is required; it is small, cannot slip, and can be made when one end of the string is just long enough to make a loop. It is more liable to jam than the one last named.

Bend one end of the cord into a loop, which hold in the left hand, pass the other end through the loop, around it and then under itself.

A little practice will enable the learner to use both hands at once, in which case it can be tied very quickly. It is easily made after learning the ﬂat knot, by passing one end across or under the loop instead of through it.

It is obvious that in having the free end of the loop long it can be used instead of another end, and thus heavy bodies, as window-sash weights and clock weights are hung. Is used for fastening broken sticks or rods after serving them with several turns of the cord which should never overlap.

Before beginning the serving make a loop a little longer than the proposed extent of the turns (a, Fig. 3). When the serving is finished pass the end of the cord through this loop, and by pulling in its free end the other is drawn within the serving and made secure (b, Fig. 3).

Is made more quickly than any other tie, can be instantly undone, and is very secure. It is used to fasten ends of ropes in rings, etc., when they are to be quickly cast off, and may be used for slinging light bodies of small diameter.

It is also put over the tops of bottles to fasten in the corks when home brewing, and is then called the beer-knot: in this case the two ends are afterwards tied. By reversing, it becomes a running knot, or "sailor's knot."

In practicing, first take the fixed or "standing" part of the line in the left hand, make a loop in it: then make a second loop in the right-hand part, and put it through the first (a, Fig. 4).

Afterwards try it through rings. and around rods and small posts (b, Fig. 4). For large posts use the glove hitch; the single half-hitch will slip.

Remember that when it is to hold, the strain must come on the standing part. It differs but slightly from the common single bow-knot, and can be made as easily with a little practice. Be sure to master it when learning how to tie various knots. One of the most useful of all fastenings; it is not properly a knot, for it is neither tied nor untied. It is largely employed on shipboard and in reducing dislocations, but opportunities for its use in ordinary life are of daily occurrence.

In practicing, take the fixed or standing part of the rope in the left hand, turn the free end under it, and put it over the thumb; repent this, and the hitch is made. (Fig. 5.) Figure 6: Tying a Parcel or Box

When the clove-hitch is made on the standing part of the rope, after it has passed around a post or box, it is called two half-hitches, and is the best method of fastening boxes or bundles. In this case, it should never be fastened to the cord at right angles to its own, but that in a line with it. (Fig. 6.) Is used in slinging heavy bodies; it cannot slip, and will never jam under the heaviest strain. It is difficult to understand at first, but with a little practice can be made very rapidly.

When learning how to tie various knots the old fashioned way, this knot will well repay the trouble spent in learning it.

The Twenty Most Useful Knots 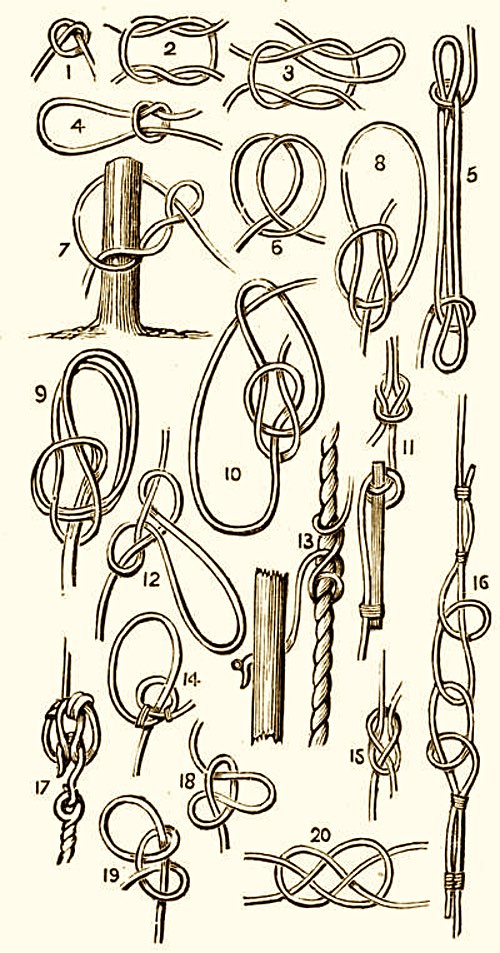 20 Most Useful Knots for Almost Any Purpose

When learning how to tie various knots the old fashioned way, you'll find the following types most useful and practical in life's situations:

How to Tie Various Knots and its illustrations were adapted from The Household Cyclopedia of General Information by Henry Hartshorne, M.D., published by Thomas Kelly, New York, in 1881.

How to Tie 7 Basic Knots 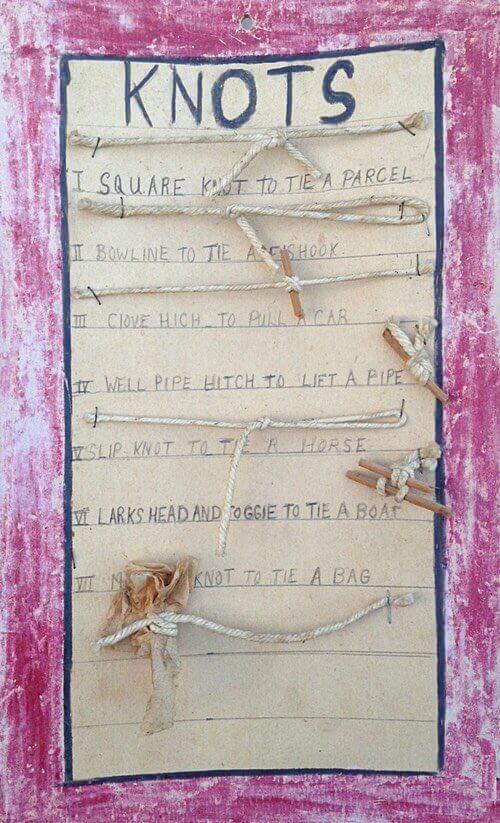 Pictured above is a card demonstrating how to tie various knots that I created for a merit badge when I was an eight-year-old Wolf Cub Scout in 1958.

The 7 basic knots were graded 7/10 by the Akela who said my printing could stand some improvement. Hey, I was only eight!