Grandma's secret cooking tips often helped her in the kitchen. She gleaned them from popular cookbooks and almanacs, and some tips had been passed down from her mother. You are sure to find them useful in your own kitchen. 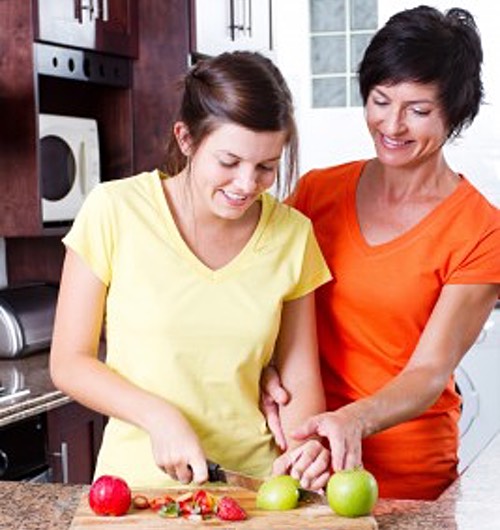 The knife used for peeling a pineapple should not be used for slicing it, as the rind contains an acid that is apt to cause a swollen mouth and sore lips. The Cubans use salt as an antidote for the ill effects of the peel.

Milk which is slightly turned sour or changed may be sweetened and rendered fit for use again by stirring in a little baking soda.

Grandma's secret cooking tip for whenever a recipe calls for scalded milk.

Put milk in top of double boiler, having water boiling in under part. Cover, and let stand on top of range until milk around edge of double boiler has a bead-like appearance. 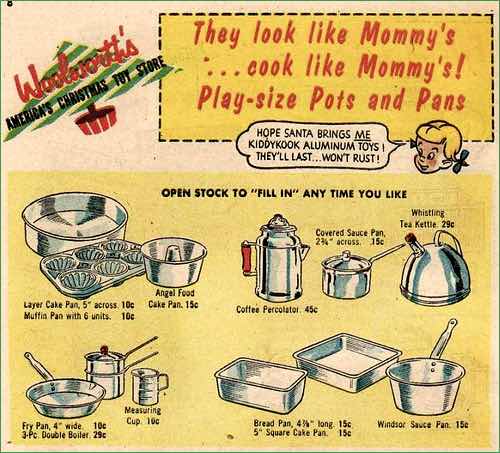 A pinch of baking soda stirred into milk that is to be boiled will prevent curdling.

A spoonful of grated horseradish will keep a pan of milk sweet for days.

Milk will keep sweet longer in a shallow pan than in a pitcher.

A good substitute for cream can be made with fresh milk, a little butter and flour.

Prick them with a pin; if good, the oil will instantly spread around the puncture.

Put sugar in a smooth granite saucepan or omelet pan, place over hot part of range, and stir constantly until melted and of the color of maple syrup. Care must be taken to prevent sugar from adhering to sides of pan or spoon.

Continue the caramelizing of sugar (see above) until syrup is quite brown and a whitish smoke arises from it. Add an equal quantity of boiling water, and simmer until of the consistency of a thick syrup. Of use in coloring soups, sauces, etc.

Cut blanched almonds in thin strips lengthwise of the nut.

To Make Macaroon Dust or Flour

Cut a half-inch gash on flat sides and put in an omelet pan, allowing one-half teaspoon butter to each cup chestnuts. Shake over range until butter is melted. Put in oven and let stand five minutes. Remove from oven, and with a small knife take off shells.

By this method shelling and blanching is accomplished at the same time, as skins adhere to shells.

To Add Flavoring Extracts and Wine

They should be added if possible to a mixture when cold. If added while mixture is hot, much of the goodness passes off with the steam.

To Prevent Salt From Lumping

After Broiling or Frying

If any fat has spattered on range, wipe surface at once with newspaper.

Many puddings that are commonly baked in a crust, such as coconut, potato, apple, and lemon are equally good and more wholesome, made by strewing grated bread crumbs over a buttered pie plate or pudding dish to the usual depth of crust; pour in the pudding filling, strew another layer of bread crumbs over the top, and bake.

Keep coffee by itself, as its odor affects other articles.

To Keep Oranges and Lemons

They keep best wrapped in soft paper, and, if possible, laid in a wooden drawer.

They keep best in a dry place, as cool as possible without freezing.

A bowl containing two quarts of water, set in an oven when baking, will prevent pies, cakes, cookies, etc., from being scorched in a hot oven.

Gather herbs when beginning to blossom; keep in paper bags.

A tiny pinch of baking soda in your icing will keep it moist and prevent its cracking on the cake.

To Prevent Pots from Boiling Over

Of all Grandma's secret cooking tips, remember this one. It is so practical, and it really works!

Rub butter or lard on the rim of a pot, and it won't boil over readily. Be sure to remember this secret cooking tip when boiling liquids such as when making candy or spaghetti.

A raw potato added to the soup will absorb the extra salt.

Dry the gathered crop, thinly spread out and shaded from the sun, tie the herbs in small bundles, and keep them compactly pressed down and covered with white paper; or, after drying them, put each sort into a small box, and by means of boards fitted in it, and a screw-press, press the herbs into cakes or little trusses.

These should be afterwards carefully wrapped up in paper and be kept in a dry place, when they will retain their aroma as perfectly as when they were put into the press, for at least three years. By the common method of hanging up herbs in loose bundles the odor soon escapes.

To Prevent a Tough Omelet

A little boiling water added to an omelet as it thickens will prevent it being tough.

This secret cooking tip sounds almost too simple, but it works!

To cut hard-boiled eggs in smooth slices, dip the knife first in water.

To Prevent Heavy Cake and Breads

Much of the heavy cake and bread is the result of the oven door being slammed. Close as gently as possible.

An empty tin can edge makes a good cutter for slaw or potatoes.

A little vinegar in the water will help make tender an old fowl when cooking.

A pinch of ginger in the mix will keep bread sweet.

To Beat White of Egg Quicker

A pinch of salt will make the white of an egg beaten quicker.

To Prevent Scorching In Oven

Salt placed under baking tins in oven will prevent contents from scorching.

To Remove Cake From Pan

If cake sticks to the pan, set on a wet cloth 5 minutes and cake can be removed.

To Remove Odor From Oven

If juice from pies runs out in oven, salt sprinkled on juice will remove the odor and smoke.

Grandma's secret cooking tip for peeling oranges can be used with modern microwave ovens, but only heat the orange for a VERY FEW seconds, or it will explode.

Heat oranges a few minutes in oven before peeling, then the white inner skin will come off with the rind.

Lay it a few minutes in a strong vinegar water.

Hence, in preparing porridge, gravies, sauces, etc., the salt should not be added until the dish is prepared.

Never allow fresh meat to remain wrapped in paper; it absorbs the juices.

To Prevent Odor of Boiling Ham or Cabbage

Throw red pepper pods or a few bits of charcoal into the pan they are cooking in.

To Prevent Mold on the Top of Glasses of Jelly

Just lay a lump of paraffin wax on the top of the hot jelly, letting it melt and spread over it. If preferred, the paraffin can be melted and poured over after the jelly is cold.

To prevent burning saucepan when boiling milk, sprinkle bottom of the pan with a little granulated sugar. Let it get hot, then pour in the milk. It also keeps milk from boiling over.

To Keep Syrup From Crystallizing

A pinch of baking soda added to any boiled syrup will keep it from crystallizing.

When Squeezing Lemons For Juice

Heat lemons well before squeezing and there will be double the quantity of juice.

To Keep Salt From Sticking

A few grains of rice placed in the bottom of a salt cellar will keep salt from sticking in damp weather.

Add one-quarter teaspoon baking soda to cranberries while cooking and they will not require much sugar.

Grandma's secret cooking tip that she used when baking pies with fruit fillings.

To keep juice from running out of fruit pies, insert a small cornucopia (cone) of white note paper into the center of the pie so that it is about twice the height of the pie.

When separating eggs, if you drop a portion of egg yolk into the whites, moisten a cloth with cold water, touch to the yolk, and it will adhere to it.

Cut bread for fancy sandwiches lengthwise instead of across the loaf and there is less waste.

Empty remaining cracked ice into sack; ice will melt, leaving the salt which can be used again.

To Secure Serving Dishes On Ice

Place rubber ring from fruit jar under dishes. Ring will adhere to both ice and dish.

When a custard pie shrinks from the crust, it has been baked in too hot an oven. The oven should be hot for the first eight or ten minutes, in order to bake the pastry so that it will not become soaked with liquid. Then reduce the heat or the custard will boil.

If an egg is strictly fresh it will, when placed in a pot of water, lie on its side at the bottom of the pan. If stale, it will stand on end, and if very old, it will rise to the surface.

To Remove Cooking Odors From Hands

Wash hands and before drying them rub on about 1 teaspoon of dry mustard powder.

Prick the skin of the apples with a pin and they will cook without bursting.

To Remove Cooking Odor From Kitchen

Should food become burnt while in the process of cooking, sprinkle a tiny pinch of coffee grains over the hot stove or element. The fragrance of the burning coffee will kill the burning smell.

Dip the spoon in milk or water and the pancake batter will drop off the spoon easily.

First hold the paring knife over a hot stove or in boiling water and the potatoes will slice easily.

Never beat eggs in an aluminum pan, as it is sure to darken them.

A TINY pinch of salt will stop icing from going sugary.

Add 3/4 tablespoon of flour in butter icing to prevent it melting.

Use Grandma's secret cooking tips with caution and common sense, and always AT YOUR OWN RISK. The use of modern ingredients and cooking methods may produce different results. Some tips might be outdated and are simply entertaining.