Thanks to Grandma's favorite homemade cherry pie recipes, you're in for a special treat. Cherries have been a favored pie ingredient for generations.

Tradition has it that Queen Elizabeth the First made the first cherry pie, but it's quite unlikely that Her Majesty ever visited her royal kitchens. Therefore, its inventor will forever remain unknown.

Surprise everyone with a freshly baked, homemade cherry pie. Then, prepare yourself for all the compliments! 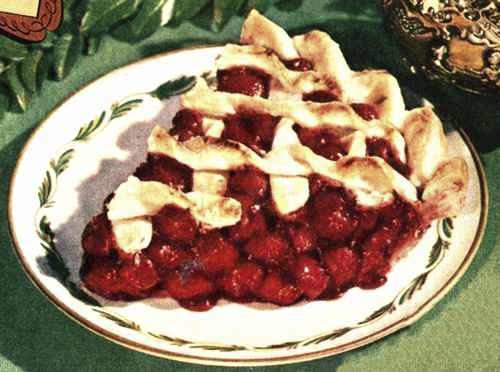 Line a pie plate with rich paste, sprinkle cornstarch lightly over the bottom crust and fill with cherries and regulate the quantity of sugar you scatter over them by their sweetness.

Bake (400°F) with an upper crust, secure the edges well, by spreading the white of an egg all around and pinching firmly together. Eat cold.

Line your deep pie plate with good crust, fill half full with ripe cherries; sprinkle over them about a cupful of sugar, a teaspoonful of sifted flour, dot a few bits of butter over that. Now fill the crust full to the top. Cover with upper crust and bake (400°F).

This is one of the best fruit pie recipes, if made correctly, and the cherries in any case should be stoned.

This vintage pie is one to make when cherries are unavailable, and you have a few cranberries in the cupboard. Imagine! A cranberry pie that tastes as if it were made with cherries!

Cook cranberries and thicken with the flour and pour into crust and cover with top crust. Bake at 400°F. —Mrs. Foi

About the Homemade Cherry Pie Recipes 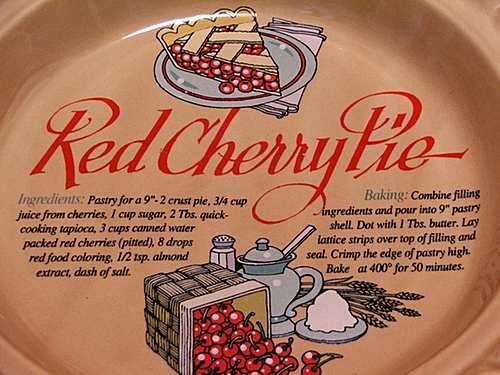 Cherry pies were very popular in the Elizabethan Era, and they were said to be one of the Queen's favorite sweetmeats. And over the years, they've remained a favorite with pie lovers of all ages, even inspiring a verse in a popular American nursery rhyme.

She can make a cherry pie,
Quick as a cat can wink an eye,
She's a young thing
And cannot leave her mother. —Anon.