These healthy vegetable dessert recipes are perfect for your Thanksgiving Dinner and fall get-togethers. Make unique harvest-style desserts to delight your guests and earn you well-deserved praise.

Everyone will love the taste of these unique desserts that are so in keeping with the autumn season.

Just imagine a creamy lima bean custard, an onion souffle, a tomato and corn pudding, fritters made with beets, and more. Always delicious and always a topic of conversation. 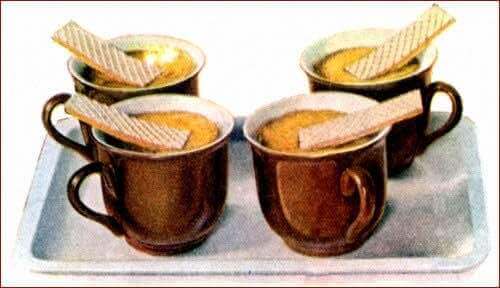 Wash one cupful of dried lima beans, cover them with cold water and soak overnight. Drain and put them into a saucepan covered with cold water, and boil until they are soft.

Rub them through a sieve, add half a pint of sugar, two teaspoonfuls of butter, three beaten eggs, half a cupful of milk, and one teaspoonful of vanilla extract.

Mix and divide into custard cups, cover with buttered papers, and steam gently for half an hour. Serve hot or cold with sweet wafer cookies.

Imagine, an onion souffle! Of all the healthy vegetable dessert recipes, this might be your favorite. It's delicious!

Melt two tablespoonfuls of butter in a saucepan, add three large, sliced onions and one cupful of water, cover tightly and let the onions steam until tender and all the water is cooked out, then allow them to become a yellowish color.

Divide into small, buttered baking dishes suitable for serving in, sprinkle a little sugar and chopped nuts over the top, and bake (325°F) until ready. 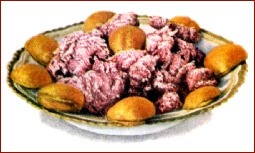 Boil the beets until tender, then skin them and rub them through a sieve, add the yolks well beaten, the sugar, cream, flour, nutmeg, and lemon rind.

Mix well and form into neat fritters, using a little flour. Allow to stand for fifteen minutes in a cool place, then fry in smoking-hot fat or lard. Serve decorated with fresh or preserved apricots, or homemade ice cream.

Form into neat croquettes, brush over with a beaten egg, toss in fine bread crumbs, and fry in plenty of smoking-hot fat or lard.

Drain, and serve the croquettes with a sweet dessert sauce. You will discover that a healthy vegetable dessert recipe can make a delicious dish for serving on any occasion.

Mix and pour into a buttered baking dish. Sprinkle a few bread crumbs over the top, dot with small pieces of butter, and bake for half an hour in a moderate oven (350°F). Serve hot in the dish in which the pudding was baked.

First wash one cupful of lentils in several waters and soak them in water for twelve hours; then boil them until soft but not pulped.

Make into small round cakes, lay on buttered tins, and bake in a hot oven (375°F) for fifteen minutes. Sprinkle a few chopped nuts on top and serve hot.

Put a spoonful of this mixture into each gem pan and bake (325°F) until done. These little tarts are so good tasting! Proof that healthy vegetable dessert recipes can make delicious desserts for any occasion.