Grandma's old fashioned Thanksgiving cake recipes make delicious cakes that will complement your traditional Thanksgiving meal and provide an alternative for those who don't care for pie. However, I can't imagine that anyone wouldn't care for a piece of Thanksgiving pumpkin pie. It's so good!

Imagine being able to enjoy scratch-made harvest-time cakes with the all-natural baked-in taste of nuts and fruit. You'll love the delicious flavors, and so will your guests. Nothing beats of these homemade cakes. You must try them! 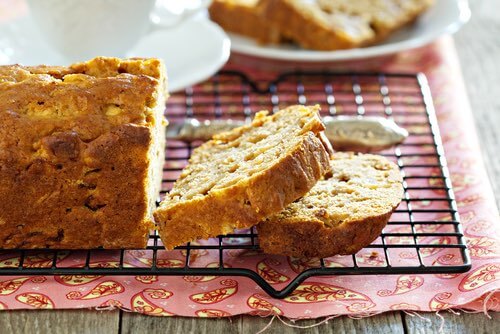 These traditional Thanksgiving cake recipes are so good that they were once used to make dessert cakes for serving at formal White House dinners.

Soak three cupfuls of dried apples overnight in cold water enough to swell them; chop them in the morning and put them on the fire with three cups of molasses; stew until almost soft; add a cupful of nice raisins (seedless, if possible) and stew a few moments and remove from heat.

When cold, add three cupfuls of flour, one cupful of butter, three eggs, and a teaspoonful of baking soda; bake in a steady oven (325°F).

This traditional Thanksgiving cake recipe will make two good-sized panfuls of splendid fruitcake; the apples will cook like citron and taste delicious.

Raisins may be omitted; also, spices to taste may be added (for example, cinnamon and nutmeg). This is an inexpensive cake, yet it is delicious. 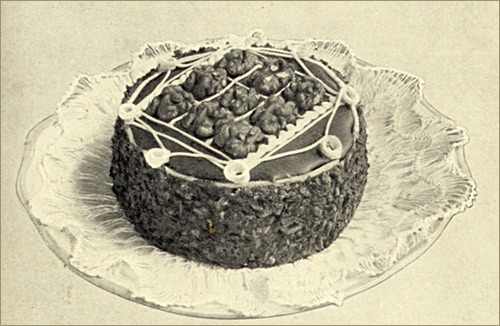 Two cups of fine white sugar creamed with half a cup of butter, three eggs, two-thirds of a cup of sweet milk, three cups of sifted flour, one heaping teaspoonful of baking powder sifted through the flour; a tablespoonful (level) of powdered mace, 3/4 cup raisins, a coffee cup of hickory nut or walnut meats chopped a little, walnuts to decorate.

Fill the cake pans with a layer of the cake, then a layer of raisins upon that, then strew over these a handful of nuts, and so on until the pans are two-thirds full.

Line the tins with well-buttered paper and bake in a steady, but not quick, oven (about 325°F). This is a most excellent Thanksgiving cake recipe.

Once cupful of sugar and two tablespoonfuls of soft butter stirred together; add the yolks of two eggs well beaten, then add four tablespoonfuls of milk, some flavoring of choice, then the beaten whites of the eggs.

When the cake is cool, have ready half a pint of sweet cream sweetened and whipped to a stiff froth, also flavored. Spread it over the cake while fresh. To whip the cream easily, set it on ice or in the ice box before whipping. 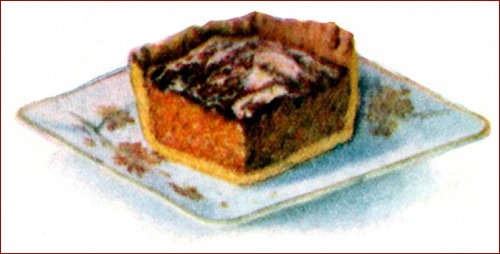 This unique carrot cake recipe could also be baked in tart shells instead of cut into squares (see above picture). It makes an attractive tasty dessert for any occasion so keep this old fashioned Thanksgiving cake recipe handy.

Pour mixture into a small baking dish that has been lined with pastry. Bake in a hot oven (425°F) until ready and serve hot or cold, cut in squares.

Sift the flour, baking powder and spices into a bowl, rub in the lard, add the currents, sugar and breadcrumbs, then add the beaten egg and enough milk to make a nice dough. Put into a buttered tin and bake (325°F) until a skewer will come out dry.

With their rich-and-creamy cream cheese icing, pumpkin bars will be a huge hit with family and friends of all ages. Serve these little cakes as a treat after a walk in the woods or as an evening snack.

In a large mixing bowl beat together eggs, sugar, oil, and pumpkin. Combine the flour, cinnamon, baking powder, baking soda, and salt. Gradually add the combined dry ingredients to the pumpkin mixture and beat together well.

Pour your mixture into a lightly buttered jellyroll pan and bake at 350°F for 25 minutes or until a toothpick comes out clean when inserted. Always test for doneness.

Allow to cool before cutting into bars and adding the cream cheese icing.

If desired, you can add a few drops of yellow or orange (combine drops of red and yellow) food coloring to make them appear more festive in the traditional Thanksgiving and Autumn colors.