Mom's relied on her old fashioned rhubarb custard pie recipes when the rhubarb in her garden was ripe and in season. These homemade dessert pies with the sweetly tangy flavor of rhubarb are easy to make and taste absolutely delicious.

I love a slice of rhubarb pie served warm with a scoop of vanilla ice cream on top, but it's an excellent pie when eaten cold from the fridge too.

Don't put it off any longer. Go get some rhubarb and make one of the covered, custard, or meringue style pies — they are all absolutely delicious. 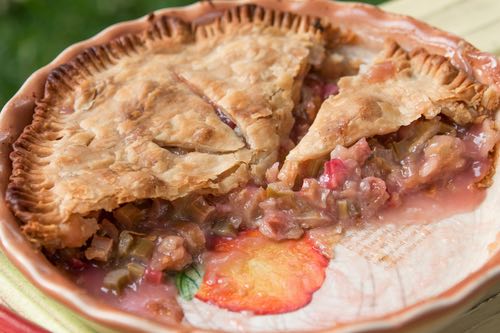 It's the sweet, sugary meringue topping that really sets this old fashioned rhubarb custard pie recipe in a class of its own.

Place rhubarb in a pastry lined pie plate and prepare pastry strips for top of the pie. Mix the sugar, flour, salt, and cream together. Pour mixture evenly over the rhubarb.

Top with pastry strips in an open lattice fashion. Bake at 425°F for 10 minutes, then reduce oven temperature to 350°F, continue baking until pastry is nicely browned, and the rhubarb is tender.

Strip the skin carefully from the stalk of the rhubarb and cut it into small pieces. Scald with boiling water, then drain and press out every drop of water with your hands. Now set over the fire to stew, with as little water as possible.

When done, press through a colander or wire sieve, sweeten to taste and flavor with grated nutmeg or lemon. Bake (425°F) with strips of dough put across the top.

I forgot to add: Beat up two eggs for each pie, after mixing the sugar. You may put in the yolks alone and use the whites for a meringue. If you do this, bake the paste first, then the custard.

Strip the skin from the stalks of rhubarb, more commonly called pie-plant, then cut them in pieces abut an inch long, pour boiling water over them and let them remain in it until you prepare the pie crust.

Drain the rhubarb, line your pie plates with a rich pie or puff paste, sprinkle cornstarch over the paste and then sugar.

Now lay in the rhubarb, sprinkle heavily with sugar, and put flakes of butter over them (you may omit the butter if you object).

Cover with a rich paste and retain the juice by moistening the edge of the under crust with white of egg, and pressing the upper one upon it. Spread beaten egg over the top crust also. Bake at 425°F.

Use perforated pie plates and remove pie from the plates as soon as taken from the oven, to prevent them from sticking.

These homemade rhubarb pies were once made by the White House chefs to prepare desserts for the president and formal luncheons.

Cut the large stalks off where the leaves commence, strip off the outside skin, then cut the stalks in pieces half an inch long.

Line a pie dish with paste rolled rather thicker than a dollar piece, put a layer of the rhubarb nearly an inch deep.

To a quart bowl of cut rhubarb put a large teacupful of sugar; strew it over with a saltspoonful of salt and a little nutmeg grated; shake over a little flour; cover with a rich pie crust, cut a slit in the center, trim off the edge with a sharp knife and bake in a quick oven (425°F) until the pie loosens from the dish.

Pies made in this way are altogether superior to those made of the fruit stewed.

Skin the stalks, cut them into small pieces, wash and put them in a stewpan with no more water than what adheres to them; when cooked, mash them fine and put in a small piece of butter; when cool, sweeten to taste; if liked, add a little lemon peel, cinnamon, or nutmeg.

Line your plate with thin crust, put in the filling, cover with crust and bake in a quick oven (425°F); sift sugar over it when served.

Rhubarb, also known in some areas as pie-plant, grew in profusion behind the old tractor shed on our farm.

In the summer, Mom would often gather a big handful of the ripened red stalks and prepare a couple of pies for our suppertime desserts.

I can still recall the enticing smell of that freshly baked, still-warm pie sitting on the sideboard waiting for us to finish our meal.

Once the meal's dishes were cleared, Mom carefully cut the pies and slid a generous-size piece onto each of our plates. It was so good tasting!