This old fashioned peanut butter marshmallow squares recipe was often used by my Aunt Sylvia McIlmoyle to make yummy treats for family occasions. She wrote out the no bake dessert recipe and gave it to Mom who found it to be one of the best dessert squares she had ever tried.

These dessert squares are quick and easy to make, and they never fail to turn out delicious. The golden-colored treats look as though you spent hours making them, but only you will know the truth. This recipe's a keeper, folks. You will use over and over again! 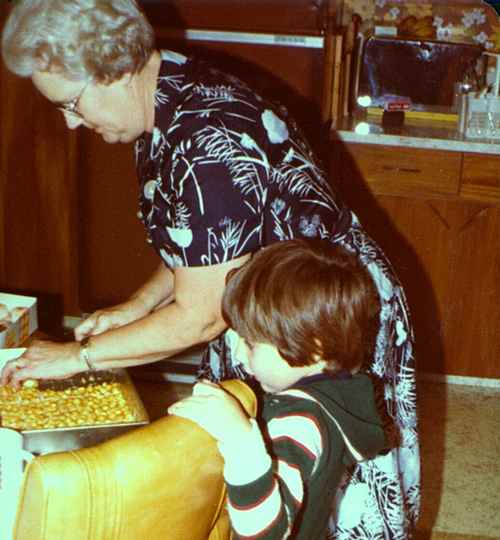 Caution: Aunt Sylvia's homemade dessert squares are sinfully delicious, and you won't be able to stop eating them! Just saying.

Mix butter, peanut butter, and butterscotch chips in a double boiler just till melted, then remove from heat. Place 3 cups miniature marshmallows in a buttered pan and spread on warm mixture. Save a few chips and marshmallows to decorate the top, or be generous and add extra. Cut in squares when cool. It's that easy. It's that delicious!

This old fashioned peanut butter marshmallow squares recipe is one that a friend of Mom's sometimes used, so I included it for you to try as a comparison to Aunt Sylvia's recipe. I still think hers is the best.

Melt above together slowly. Don't let it get too hot.

After it cools a little, stir in one bag (10.5 ounce / 297 grams) of miniature colored marshmallows. Place mixture in buttered 8-inch or 9-inch square pans.

Set in cool place and allow to get firm. Cut into squares or bars. —Doris Northey

For me, sharing this brings back fond memories. The top photo was taken in October 1979, on the occasion of my parent's 40th wedding anniversary.

It shows my Aunt Sylvia cutting a pan of her delicious squares while being carefully watched by our eldest son Peter who was hoping to get the biggest piece. And he did!

Enjoy trying this favorite family treat. If you need some amazing dessert squares to take to a party or picnic, you'll want this recipe!

An amazing dessert always helps to make family occasions so special for children of all ages, and a fond memory throughout one's life. Make some delicious memories today!